HBO's film remake of 1975 documentary Grey Gardens finally airs amidst great fanfare tonight. Both the film and the documentary feature the lives of two society belles-turned-eccentric-shut-ins: a mother (nicknamed "Big Edie," played by Jessica Lange in the upcoming film) and daughter (known as "Little Edie," courtesy of Drew Barrymore this time around).

Their story: these relatives of Jackie Kennedy -- once the toast of the bon ton - have been languishing for decades in their East Hampton mansion, which has fallen into shocking disrepair. The documentary has fascinated and horrified audiences for nearly thirty-five years.

I've been anticipating the new film with a measure of trepidation. The original documentary - which was accused by some as having predatory undertones as it probed the lives of the Edies - was at least a bald, honest portrait of lives that had taken a bizarre turn. When I watched it for the first time, I was intrigued and repulsed like everyone else: the garbage in the kitchen! The dilapidation!

Yet I feel strangely protective of the Edies as new film's premiere draws closer. Will this generation hold the women up as objects of fascination - or ridicule? Will the portrayals lapse into campiness, or treat the subjects with nuance and respect?

After all, one of the most remarkable aspects of the original Grey Gardens was the naked vulnerability of its subjects, the sort of blithe openness that often accompanies owners of grand delusions.

Americans have always had a tenuous relationship with the idea of eccentricity, unlike our forebears in England, where eccentrics occupy a hallowed part of the cultural fabric. Of course, the Brits would love eccentricity, since for them, it has aristocratic undertones; they love their aristocrats.

But in America, eccentricity has different connotations. If we happen to like a person who has eccentric tendencies, we say, "Oh, that so-and-so is such a character." "Characters" of this variety are treated with an air of tolerance - as in, every town or family has one.

But more often than not, eccentrics are regarded as freaks and treated accordingly.

Not that Big Edie and Little Edie made it very easy for Americans - or audiences of any nationality, for that matter - to find them wholly sympathetic or charming or even accessible. After all, they were more Miss Havisham than Auntie Mame.

My personal relationship with eccentrics has always been one of adoration - but that's what you get when you have British education. I always find myself trying to glean some sort of instruction or wisdom from an eccentric's idiosyncrasies - the imminence of Grey Gardens the movie has me reexamining the Edies for a life lesson. I think it would be this:

If you can see past their oddness, and past the mountains of empty cat food tins, and past the cobwebs and squalor, there it is: a total lack of apology for who they are.

That lack of apology defines their little family (and incidentally was also one of the chief characteristics of the clan Jacqueline Bouvier married into: the Kennedys).

One of the best (and chicest) life lessons I've ever been taught is to never feel the need to explain yourself to others, or apologize for who you are. It can never hurt to be taught it again.

Hopefully the new Grey Gardens will faithfully - and tenderly - relay this aspect of the Edies' characters - which might just rescue them from being mocked and disdained otherwise. 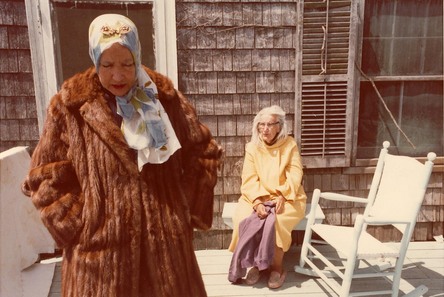 Little and Big Edie on their Grey Gardens porch.