As a young woman who has atypically looked forward to turning shocking silver (I've even promised myself to grow my pixie haircut at that time to accentuate it), I've read with some curiosity but ultimate skepticism, the rash of articles and blog posts about the supposed trend of women embracing grey hair. The most recent that I read, in UK Telegraph, was one of the more thoughtful ones; it concentrated on 46-year-old '90s supermodel Kristin McMenamy's latest photo shoot for Dazed and Confused magazine. Having always been a rather startling-looking woman with Tilda Swinton-like pallor and a broad sneer of a mouth, the shock of flowing, natural grey tresses doesn't seem so out of place on McMenamy. "You can get older and still be rock'n'roll," she told the magazine. "I thought all that grey hair would make a beautiful picture." Below are two photos (neither from the D&C shoot) that exemplify how grey can be romantic (from Vogue, August 2010)...

or totally fucking fierce (on the Givenchy runway, S2008):

This is not the first time grey hair has been in style; compared to the 18th century, this current fad is a drop in the pan. Men and women alike oiled and powdered their hair shades of grey and white starting in the mid-1700s. Oil was necessary to make the powder stick, and yes, oil and powder was unavoidably shed with movement; you can see Charles-Alexandre de Calonne, below, is leaking powder on his shoulder, like dandruff, where his ponytail rubs: 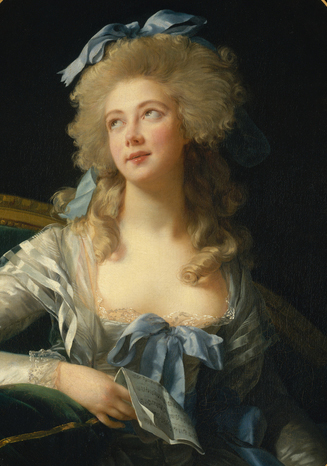 Mature as her dusty locks make her to our 21st century eyes, this is only a 22 year-old woman; you can see her cheeks are still youthfully plump and rosy (though blush undoubtedly assisted). Here is the same woman -- approximately 25 years later:

In addition to the change of hair color and style, it is obvious by this comparison that there was a radical change of silhouette in the costume of the mid-late-18th century and that of the early 19th century. As with the turn of the 20th century, a great deal of bulk and fussiness was discarded in favor of a sleeker and ultimately more youthful, modern look in hair and costume. I don't think it's the powdered grey hair alone that ages our subject, but rather the compilation of big, fussy, surreal hair with busy bows and lace and volume in the dress and accessories. In my humble opinion, the neo-Classical look of the early 19th century just feels more modern. But I digress.

Marie Antoinette (1755 - 1793) was both early champion and ultimate victim of powdered coiffures. The Flour War of 1775, caused by the de-regulation of wheat prices by the government, lead to hoarding, gouging, and the inability of lower classes to afford simple bread, and was the ominous precursor to the crescendo of the French Revolution. Wig powder, a product of finely ground starch (a.k.a. flour), was used liberally by the naive queen in her legendary towering bouffants, casting her and her fashion statements in a distinctly unflattering, frivolous light. French historian Caroline Weber observed:

...although historians have established that Marie Antoinette never uttered the legendary remark "Let them eat cake," it is not implausible that the lasting association between her callousness and baked edibles in fact originated with her habit of parading her powdered, wedding-cake hairstyles before a bread-starved nation.

Here is Marie Antoinette in the very year of the Flour War, seemingly flaunting her willful ignorance of the economic struggles of her country, and all to achieve that trendy grey hair:

With no small irony, according to legend, Marie Antoinette's hair turned grey with stress and fear the night before her execution; grey hair as fashion statement had clearly run its course as it became associated with the demonized, decapitated monarch. Two years later the English government levied a tax on hair powder, the last coffin nail of that grey-haired trend... until today?

Granite hair was on the 2010 runways shows of playful Giles Deacon and goth Gareth Pugh, and the Telegraph article quoted high end hairdressers claiming to have more young clients who want grey, like Peaches Geldof, Kelly Osbourne, Kate Moss and Victoria Beckham. This kind of minimal evidence has prompted sites like trendhunter.com to prematurely declare, "For decades men and women have been trying to mask signs of aging, but a new wave fashionable gray hair is reflecting a shifting attitude regarding the physical effects of getting older." A more tempered NYTimes article quoted colorist Sharon Dorram:

...who said that among her downtown New York patrons, it is mostly younger women, renegade types, who request gray. Not lost on Ms Dorram is the irony that their older more conventional counterparts spent $1.3 billion to cover their grays last year, according to Nielsen.

I don't think gunmetal tresses were a sign of the fetishization, or even simple respect, of mature women in the 18th century, and I don't think that's the case in 2010 either. It's an unusual, edgy color precisely because so many women with natural grey hair darken it, so it really pops when a woman such as Kristin McMenamy rocks it. I think that even if more grey hair dye is being sold, it is unfortunately not a sign that older women -- specifically, naturally mature women -- are all of a sudden welcomed back into the fold for the general, fashionable, youth-obsessed public. Pixie Geldof, for example, I don't think could be said to be furthering the cause of women aging gracefully, though her hair is certainly grey:

Along a similar line, premature articles claiming the emergence of older models on runways and magazine spreads as being indicative of older women being accepted as beautiful and sexual are, I think, overlooking that those older models might be over-the-hill 30+, but they are recognizable and have proven themselves exceptionally good at selling products -- hence their previous successes. In economically strapped times I think we all return to the familiar, tried-and-true methods of existence, and I believe designers are returning to supermodels of yesteryear because they have the most experience and accomplishments, and fame/notoriety that can only come with age -- also, they are still smokin' hot. Kate Moss is still landing covers at age 36 (which is, by the way, close to the height of a woman's biological peak of personal sexuality), and 37 year-old Heidi Klum is even modeling in Victoria Secret lingerie shows (after having popped out 4 children). This is evidence that magazines and designers don't want to take as many risks these days, when merchandise is harder to move off shelves. They know Moss and Klum, they know their scopes, their talent, and the sales they still consistently generate. After all, you don't hear about a surge of random, unknown older women taking up the runways -- that would demonstrate real progress in my eyes.

A TIME article from a few years ago astutely pointed out the frustrating correlation between the success of the feminism movement and women's increased use of hair dye. The very same Baby Boomers who fought to enter the workplace are the same who feel compelled to color their hair, to appear more youthful, energetic, or conservative (grey-haired women can appear alternative or hippy-like, often to their detriment in the workplace). The TIME article quotes some shocking statistics about female politicians, for whom it could be argued the physical manifestation of age and experience should be an asset:

"...of the 16 female U.S. Senators -- the highest number ever -- who range in age from 46 to 74, not a single one has visible gray hair. Of the 70 female members of the House, only seven have gray hair. Political professionals say that the double standard is a great unspoken inequity but that candidates and officeholders don't dare publicly discuss it for fear of seeming trivial. In an interview before her death last year, Ann Richards, the famously white-haired former Governor of Texas, told me, 'You can't appear to be too flashy because it will send the wrong message, but at the same time, you need to appear energetic. The issue is much more significant for women because the hurdle is higher in our society. We're not sure what we want our [female] elected officials to be -- mother, mistress or caretaker.'

As evidenced by the world's obsession with Michelle Obama's style, politicians' wives face intense scrutiny too, and most of them color their hair. I wonder if Nancy Reagan would have received the same childish sniggering that Barbara Bush endured for supposedly looking so much older than her hubby, if she had not concealed her own grey hair with that frosted brown. It might come as a surprise to learn Barbara and Nancy were the same age -- 64 -- when their respective husbands became the President, and though I admit that from a distance Babs looks older, I frankly like the luminescent white she has going on, and I don't think it diminishes her stature or poise:

Lord knows I'm not against experimentation with appearance. But I sincerely hope women start challenging the gender bias we perpetuate against ourselves and fellow women by playing into the same limiting roles we've fought so hard to break out of. Going grey naturally may seem like a small step for Feminism (and the closely linked Ageism), but having grown up in Cambridge, MA, where there are many vibrant, intelligent, artistic women who let their grey show, it becomes suspicious and puzzling that other cities that are diverse in many ways, including appearance, are not like that. Let this so-called trend of grey hair chic be inspiration for actual grey-haired women to embrace their ages, their accomplishments, their strengths, and know they can do so stylishly.

Advertisement
May I suggest some role models?
Susan Songtag, writer