If you’ve always thought about adopting a greyhound, the coming months may be the perfect time.

On Election Day, Florida voters passed an amendment to ban commercial greyhound racing by the end of 2020.

Supporters of the ban, which included several high-profile animal protection groups, said that greyhound racing is rife with cruelty. They cited greyhounds having to spend most of the time in cages and racing injuries that led to untimely deaths for the dogs. Opponents countered by saying that most dogs were treated well and characterized instances of documented abuse as the result of a few bad apples.

But one fact is clear: Now that the ban is going forward, a lot of dogs will need a place to go.

How many greyhounds are we talking about here?

Estimates on exactly how many greyhounds will need homes vary. The Florida Greyhound Association estimates that there are more than 8,000 dogs currently racing in Florida. But a Greyhound Adoptions of Florida spokesperson told Lifehacker it was more like half that, 4,000 dogs.

It’s unclear exactly how many will need placement, since about 1,500 to 2,000 will probably be transported to race in one of the five remaining states where racing remains legal and active, Dennis Tyler of the Greyhound Adoption Action Alliance told The New York Times

To complicate things further, there are also thousands of greyhounds in breeding facilities throughout the South and Midwest, Brooke Stumpf of GreytHounds of Eastern Michigan told NBC News. Since Florida is home to 11 out of the 17 remaining tracks in the U.S., it’s likely that some breeding farms will have to offload dogs as well.

Are all of those dogs going to be able to find homes?

The good news is that there’s a strong network in place of greyhound adoption groups around the country that help retired racing dogs find homes.

But some rescuers are worried about the possible flood of dogs. Carol Becker, president of the adoption group God’s Greyts, told the Times that many are on “pins and needles” trying to line up foster homes and future vet care for when the tracks start closing.

Others aren’t as concerned.

“We’re not in a panic, we are not going to change the way we do adoptions,” Maryann Tolliver, president of the Greyhound Pets of America Tampa Bay, told the Tampa Bay Times.

Since the ban doesn’t fully kick in until 2020, Tolliver said, the end of racing will likely be more like a phase-out, meaning dogs will trickle into rescues as opposed to coming all at once.

So, how do I adopt one of these greyhounds? Do I have to live in Florida?

You don’t have to live in Florida to adopt a retired greyhound, since there are rescue groups around the country that receive ex-racing dogs and work to find them local homes. That means the best way to apply to adopt a greyhound is to find a rescue group near you.

The Greyhound Project Inc. has a directory of adoption groups by state on its website. If you aren’t able to adopt but still want to help, you can ask an organization if it needs foster homes, volunteers or donations.

What should I know about greyhounds?

Like any type of dog, greyhounds’ personalities vary from individual to individual. That said, there are a few things to generally keep in mind if you’re interested in adopting a retired greyhound.

Greyhounds are known to be sociable and loving with people and are often nicknamed “40 mph couch potatoes.” That’s because, though they can run high speeds, they also tend to spend most of their time lounging and napping.

Numerous rescue groups also point out that greyhounds do need exercise and regular walks, but it’s a misconception that the dogs are hyperactive or need enormous amounts of room.

Michael McCann of The Greyhound Project previously told The Bark that greyhounds are great “if you’re looking for a dog you can take walks with, and then come home and settle right down.” But, he noted, greyhounds typically are dogs that need to be in a fenced-in yard or on a leash, since they’re apt to sprint off at a moment’s notice if something catches their eye.

Many greyhounds also have a high prey drive and are apt to chase small animals, meaning that not all of them can be safely homed with smaller pets like cats. However, many greyhounds can ultimately live in harmony with cats, so you’ll need to assess your situation with the rescue group.

Thousands Of Ex-Racing Greyhounds Will Need Homes Soon. Here's How To Help.
Greyhounds 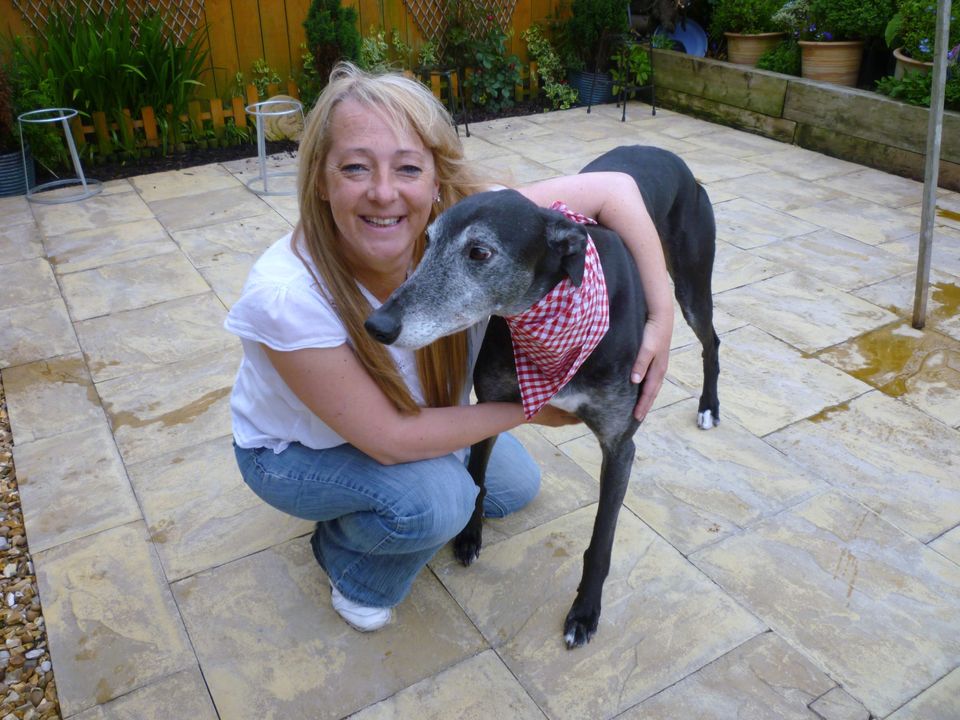