Maybe all dogs go to heaven, but come this January only one lucky orphan will land a rags-to-riches tale of finding heaven on earth as First Pet. As debates swirl around the Obama family's impending doggy declaration, media attention has focused mainly on a parade of various mutts, doodles and poo's who are eagerly awaiting love. But there's also another, quieter contender with an A-plus pedigree ready for the position: the retired racing greyhound. While strategists continue to pontificate on the proper recipe of critical elements for the next First Pet's political triumph, I say that now's the time for Barack Obama to play the race card...by adopting a greyhound.

Contrary to popular belief, retired racing greyhounds are sweet companions and low-key family pets. C'mon Conquer, my eight-year-old ex-racer is a noble and endearing salt and pepper goofball who is unashamedly the laziest dog on earth 23.5 hours out of the day. She has never aggravated my allergies and always suffers the company of overly enthusiastic children with brave patience, which is more than I can say for myself. And people are supposed to get dogs that look like them, right? Editorial cartoonist Gary Varvel depicted Obama as a greyhound way back in February 2007, while Claudia Presto of the Greyhound Gang recently summed up our President-Elect's houndish traits in her my.barackobama.com comparative top ten list. She cited commonalities between the two such as elegance, a lean physique and the ability to run a race and win. 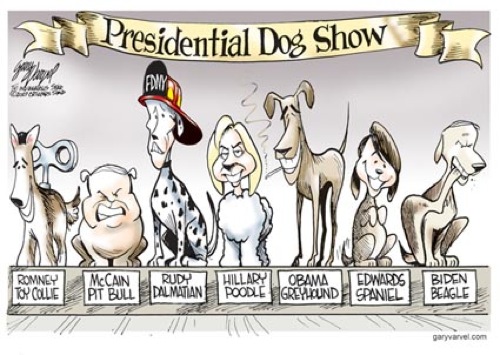 The results of the "My Dog Looks Like Obama or McCain" photo contest over at Rover411.com honored Kalli the greyhound as runner-up to champion Amore Francine, a boxer from Mt. Clemens, Michigan. But unfortunately for Amore (to her breed's deep frustration) boxers are not recommended as a good choice for families with pet allergies. From years of avid pageant watching education I feel that since Amore is unable to fulfill all of her duties as the reining Champion (she can't hang out with Malia), Kalli should step in and take the crown. Sometimes you win, sometimes you lose... that's just the breaks in this dog eat dog world. There's always the next election. 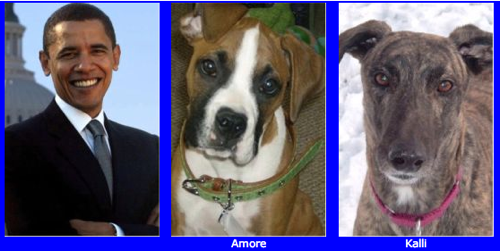 It's not only that Obama looks like a greyhound- he may actually owe his new position, in part, to them. While the designer doodles and poo's were sitting pretty during this contentious presidential campaign, greyhounds actually hit the streets to Organize for Obama. Check out these pictures of grey's dressed in their Obama flair, tirelessly canvassing for both Hope and Change. Even their miniature cousins, the Italian Greyhounds, trotted out for the cause, which is notable since they, as foreign citizens, were unable to vote.

So it seems that as the inauguration approaches the Obamas should be destined for a greyhound, or two...maybe one for each girl? Like potato chips and tattoos, greyhounds are better in multiples. Rumor has it that the Bidens are also in the market for a big dog, so why not make it rescue racers for everyone? With any luck there will soon be a veritable herd of hounds frolicking on the President's lawn and smelling the roses during press conferences in the White House garden. Though not unprecedented, as President Hayes owned Grim the greyhound and President Tyler was the proud papa to Le Beau, an Iggy, (which may explain the aformentioned campaign solidarity) it will be a big deal if greyhounds return to Washington. A renaissance of greys would mark the end of a lengthy vigil- Grim's paws last padded around the Oval Office in 1881. I'm crossing my fingers that as this pet situation evolves, our new President will decide to use my favorite campaign slogan in regards to his thoughts on greyhound adoption: YES WE CAN! 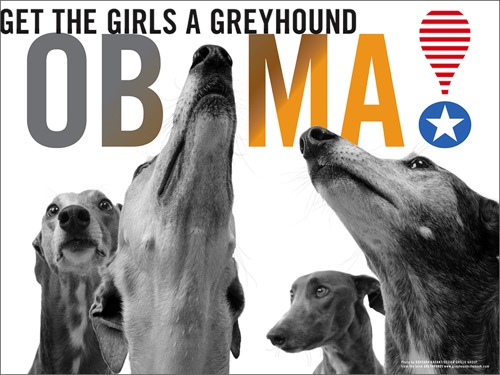