Note: Do not read on if you have not seen Season 11, Episode 12 of ABC's Grey's Anatomy, titled "Staring At The End" 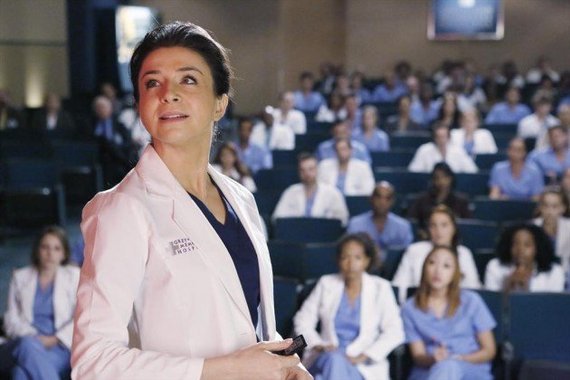 Tonight, we start to watch Amelia do the biggest surgery ever on "Grey's." Last week was the warm up. While Callie's jealousy about Arizona and Dr. Herman's friendship was a cute way to show that she's still having trouble being single, I thought it was the saddest thing. Watching two people become close friends just to have one die doesn't seem fair.

Herman stares at the clouds -- before her scans and in real life, on the grass, wondering what will become of her. Her doubts are not about Amelia's ability to operate. Amelia can beat herself up just fine, thank you. But because she respects that gnarly tumor.

I would like Geena Davis to stick around. We lost one cocky doctor last year with Yang. Derek's in D.C. We need her. Arizona needs her. Mainly because I can't deal with Arizona when she's down and out. It's such a deep fall.

In other news, Amelia is a much better woman than I am in that she can compartmentalize her crush and focus on work. Who does that? Brain surgeons, I guess. I connect with her because she's so had on herself and it could become her tragic flaw if she's not careful.

What's irritating is Callie and the other doubters. Sure, Derek is great. But can't a young female get in there just as good?

Lastly, where are Jackson and April? Are the O.K.?