Note: Do not read on if you have not seen Season 10, Episode 10 of ABC's "Grey's Anatomy," titled "Somebody That I Used To Know." 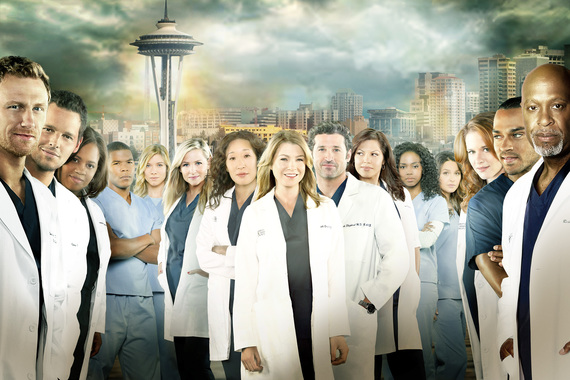 Holy, action. This episode was on a roll from the very beginning. To make sense of it all, and in honor of Bailey, I've blocked out this episode in groups of threes. Because I liked the story line with the patient and her husband searching for a mate for her lover -- a very "Grey's Anatomy" take on true love and getting over people and making the awkward seem normal.

And because patterns and compulsive organization are sort of my thing. But where to begin? It was all so good and juicy -- just like Marling's turkey's going to be. Ah! That's a good place to start.

Advertisement
"You send your lacky to tell my lacky?!"

Meredith and Christina are still not talking, unless they're fighting over the 3D printer. Yang's project is going to take longer than she thought, but Meredith needs to start her own work tonight, and a baby is waiting in the wings. Meredith, for once, is more of a bully than Christina, and won't be swayed from sticking to the printing schedule. As Grey scolds Yang, Shane steps in and, although highly disrespectful and out of line, takes care of business. Yang's so relieved she smooches him in thanks.

So, yes, they're fighting over the printer but the point is that they are not even close to making amends. And Thanksgiving is just around the corner. Owen's new lady, Marling, apparently bakes and roasts, in addition to being a cheerful, non-jealous, talented doctor, which gets her an invite from Meredith to cook Thanksgiving dinner...for everyone, at her house. Owen wants to extend an invite to Christina, but Meredith's not having it. I have a feeling that sweet potatoes are going to fly.

"You don't want to be the kind woman who says 'I'll wait for you in case it doesn't work out with your wife."

I have to say this threesome was not as stressful as I thought it was going to be, though I do feel a little proud for calling Callie and Arizona last week. Arizona spills that she was with someone, and Callie eventually figures out that it was Murphy, who's so nervous to be in the operating room with both of them that she drills through a patient's bone. And then Arizona and Callie have the conversation I knew they'd have to have. Arizona calls Callie on not really being over it, not forgiving, and not letting her back on the couch. I'm glad that Murphy has her intern friends, who are becoming more and more interesting each week, to lean on. She's sort of growing on me.

"If you squint real hard, it looks like OCD..."

Poor, poor Bailey, who's being plagued with some OCD, PTSD, sort of thing after the whole hole-in-the-glove incident from last season. It's hard to watch her -- she was always my favorite -- be so powerless and unhappy. She's losing it though and Ben had to tell someone. Though it would have been better if it were on purpose and not just venting to Derek.

Bailey needs a long vacation and a lot of therapy. But she's just so stubborn, I don't see how that happens.

Did Shonda Rhimes have lunch with Lena Durham?! This "Bailey has O.C.D." storyline is ridiculous. #GreysAnatomy

Sort of like Richard, who's stuck in the hospital because he can't pass a stress test to go home.

Something has to give for the both of them.

That's my third group of three; there was a bonus love triangle between April and Avery and Stephanie but does anyone really care? Truth be told, I'm more interested in how perky Jo's ponytail is. How does it get so bouncy? And can they open every episode with that song? Until Turkey Day, I'll be dancing in my underwear: