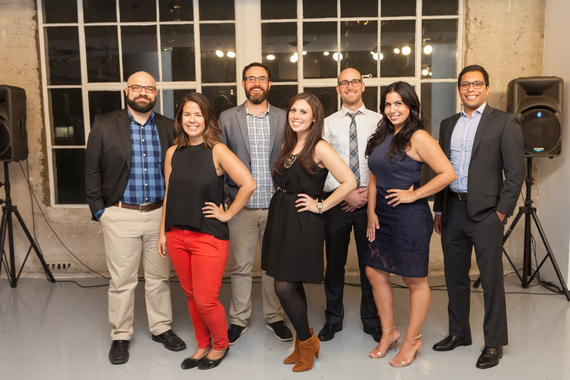 Los Angeles has been traditionally known as the center of the entertainment and fashion industries and one of the most multi-culturally diverse cities in the U.S. More recently, Los Angeles has also become home to entrepreneurs who are taking advantage of the lower real estate prices and untapped resources it offers. Until recently, many start-ups especially in the tech sector have gravitated to the West Side, locating their headquarters in Santa Monica, Venice or Playa Vista, better known as Silicon Beach. However, a similar boom is currently taking place on the East side--specifically in Downtown LA, that can only be described as a revival back to the thriving economic hub it once was back in the 50's and 60's. This can be attributed to the efforts the city has put into building attractive high-rise housing units, improving transportation, as seen with the renovation of Union Station, as well as new restaurants and co-working spaces opening up every day. The result: Downtown LA is now attracting a younger Millennial generation wanting to skip the long commute down to the beach and opting for a bustling city experience where they can live and work.

It was this shifting landscape that excited Stephen Kane. A local East sider himself, Stephen held a vision of Downtown LA becoming a modern-day tech hub. In April 2104, he was elected to downtown neighborhood council and created an unofficial task force comprised of fellow DTLA based entrepreneurs and community organizers to look at the best way to achieve this. They began to meet up regularly which quickly turned into a sort of support group. "At one point, there were 12 or so of us meeting on a regular basis to have conversations about how to grow our companies given the lack of affordable office space, distance to movers and shakers in Silicon Beach, and lack of access to investment capital. Each person took it upon themselves to research solutions and come back monthly to share with the group. Over time, a few people dropped out for one reason or another and it became the seven of us who continued to come together for these discussions," says Megan Sette, Founding Board Member of Grid110.

And it was this way that Grid 110 was born. Their vision: support entrepreneurs to positively impact the economy in Downtown LA. The idea was to help start-ups get over the hump many entrepreneurs face when trying to expand and grow--the same challenges they as a group were facing. They decided the best way to meet this challenge was to connect start-ups to affordable office space and offer access to mentors and funding to help them grow into sustainable companies, which in turn would support the start-up ecosystem downtown.

To achieve this, they first reached out to the Mayor's Office, a big force behind revitalizing Downtown LA, who facilitated discussions with developers and potential partners. One of those conversations was with Brookfield, a major property owner and eventual building partner interested in attracting tech companies into their office buildings. Another was Nixon Peabody, an international law-firm who became a financial sponsor and offered pro-bono legal services to create Grid 110's non-profit status and who now provides legal support to the start-ups that come through the doors of Grid110, an essential resource in the early life cycle of a company. "Downtown LA is going through a renaissance, and as our own business evolves, we also want to be part of the innovation we are seeing all around us. We are committed to support the success of the new businesses popping up downtown where our office is located, particularly those focused on fashion and technology, because we have industry expertise in those areas. That's why we were excited about Grid110's vision and decided to become a partner," says Seth Levy, Managing Partner of Nixon Peabody's Los Angeles office.

When I asked James Malone, Vice President of Leasing at Brookfield, why a prominent property owner and developer would be interested in supporting an accelerator like Grid110, he also said it was a strategic no-brainer for them. "With seven Class-A buildings in the Downtown core, partnering with Grid110 was a natural fit with our vision to diversify our portfolio of tenants. Traditionally our tenants have been banks, insurance companies, law firms, and consulting firms, but as we are seeing growth from technology tenants in this market along with the rising Millennial population living and working downtown, we wanted to figure out how we could make our buildings more attractive for their needs." He continues about the benefits of being in a high rise versus a renovated warehouse building that many start-ups gravitate to. "Start-ups shouldn't be scared of high rises. From an infrastructure standpoint, our buildings are robust, offering superior bandwidth, on-site security, and other amenities that growing companies need. Since we house a number of banks, investors, and other types of service businesses in our buildings, this gives start-ups strategic access to companies that they need. Plus, our rental rates are very competitive to Silicon Beach and there's nothing wrong with having a view!"

Grid110 describes itself as a community organization focused on economic development that runs similar to an accelerator. The name symbolizes various technology and innovation hubs like Culver City, Pasadena, and Downtown LA, cities that are home to industries like aerospace, entertainment, healthy care and more recently technology, and are all connected by the first freeway built in Los Angeles on the East Side, Highway 110. Currently focused on fashion tech, a natural joining of an established industry in Los Angeles and the current tech boom, Grid 110's first cohort included companies like Vrai & Oro, a jewelry line, Casetify, a tech accessories brand, and ShapeShifter, a SaS platform for fashion manufactures, all who were selected through an application process. Other companies in their initial cohort were SimpleTux and TeamTassy. They received free office space in the Gaslight building in Downtown LA for six months, as well as customized mentorship and programming on topics like hiring procedures, perfecting a pitch deck, and even how to broker a deal for office space. Grid110 facilitated Monday coffee meetings with the entire cohort and board of directors to dissect where the company needed help and curated training sessions with experts based on their needs, as well as offered lunch n' learns with major players in tech and beyond. "One of the biggest value-adds for us at Casetify were the leads and intimate connections to potential business partners, mentors and retailers that would've taken us months to get. Grid110's powerful network helped accelerate our business growth," says Jennie Yoon, Director of Business Development at Casetify.

The Grid110 advisory board also offered advice to the budding entrepreneurs in residence. Notables such as Jason White, VP of Marketing for Beats by Dre talked to them about marketing best practices. Another advisor, Peter Kim, founder of Hudson Jeans, came in and addressed the struggles associated with investing partners. Two of their other advisory board members sit as VC's, including Karen Northman of Upfront Ventures and Mike Macadaan of Science, Inc. Other local VC's also found their way into the Grid110 office, including Greycroft, who listened to pitches from each of the companies participating in the accelerator. After the six-month period, all the companies in the first cohort participated in a demo day, a prerequisite to graduation and also presented a report card on Grid110's impact on their business growth and on the community.

What struck me as unique as I spoke to the founders about the formation of Grid110 was the diversity of backgrounds each of the founding board members brought to the table and how they were able to pool their resources and expertise to bring their project to life. The board consists of three women co-founders who are all community builders: Audrey Bellis, an influencer who was key in bridging the relationship with Brookfield and founder of StartupDTLA; Megan Sette, who runs a marketing and consulting agency M Collaborative, pivotal in helping discover potential partners and collaborators; and Miki Reynolds who works as the Downtown Community Manager for General Assembly, instrumental in bringing industry leaders and advisors for mentorship. Other co-founders include Stephen Kane, a small business lawyer who runs a legal start-up called Arbiclaims; Justin Wolske with a background in the film industry and runs an education-tech start-up called Caseworx; and Prashant Samant and Jared Goodner, graduates of popular start-up accelerator, Y Combinator, who work on a health tech start-up called Akido Labs, as well as run the D-Health Lab at USC.

When I asked Stephen how they leverage this diversity, his answer was simple. "We just play to our strengths and collaborate. This board is the best group of people I've ever worked with, people who just get things done. Everyone is passionate about our mission, and no matter what the challenge, we are all able to step up to the plate. Everyone is kicking butt in their own personal careers, partly because we are helping each other out and also because of the community we are building. Our board represents a microcosm of what we are creating." The team functions like any non-profit board, but it essentially runs like a start-up. Everyone wears multiple hats and has a common interest in building an ecosystem in Downtown LA. "We all relate to what a struggle it can be to start a company specifically in LA, that's the common tie that binds. It's what makes this team great--we can all relate first-hand to the problem we're trying to solve. Not all boards have that in common," says Megan. "We are also community focused and want to learn from places like San Francisco where they're struggling to find the right balance between start-ups and the community at large. We want to challenge the status quo and really get businesses to think about how they can give back on problems like diversity and homelessness through leveraging their resources and supporting new companies who also want to do good and improve the overall ecosystem they are operating within," remarks Stephen passionately and emphatically.

Next up for Grid110, they are looking to hire an Executive Director and other full time staff to help expand their efforts. According to Stephen, "We are looking 10 years down the line and we want to expand to other parts of LA as well as other verticals such as legal, finance, health care, manufacturing, and ultimately would like to enter other markets like Detroit who could benefit from start-up accelerators and community building to support local start-up scenes and economies in a bigger way."

The next start-up class at Grid 110 begins July 1st. They are accepting applications starting May 1st, actively seeking innovative fashion tech entrepreneurs who are committed to growing their businesses in Downtown LA.