Last night I was at my grief support group meeting of The Compassionate Friends, and a light bulb suddenly went off in my brain.

Anyone who has seen my Facebook feed over the last 9 or 10 months cannot escape my frequent and unabashed enthusiasm for Bernie Sanders as my candidate of choice for President of the United States. I don't know for sure, but I suspect that many people were surprised by my sudden outburst of political fervor (normally I stick to personal updates with the occasional GMO labeling or "save the bees" type of activism). I have to admit, it caught me by surprise, too.

What I Already Knew
On the surface, I knew I supported Bernie because I believe that he is a rare kind of politician who has the integrity and courage to stand up for what's right--fairness, equality, and justice for all including our planet--without being swayed by big money interests or political favors. And I agree with his priorities and his positions on the issues.

What's more, because Hillary Clinton is running again, the inevitable comparisons to the 2008 presidential race have caused me to become aware that I really don't remember very much about that election. I was in a fog in 2007 and 2008 having just suffered the death of my precious daughter Natalie (July 29, 2005-March 18, 2007).

What I Realized Last Night
Last night it dawned on me how my passion for Bernie is also deeply-rooted in my grief. It's a little complicated, as grief can take some unexpected turns, but I'll do my best to explain.

First, a few notes about my political background and why I support Bernie
In 1984 I became eligible to vote in my first presidential election. I have always taken my right to vote seriously and have exercised it faithfully in every election since--presidential and otherwise. With the exception of 1988 when Jesse Jackson ran for the democratic nomination (I saw him speak three times that year), no candidate has ever really gotten me particularly excited. It seems like every time election year rolls around, it's the all-too-familiar choice between the "lesser of two evils."

Now, for the first time in my life, a candidate has come along and ignited a fire in my political being. I've almost become an activist--even going so far as to become a delegate candidate in the Rhode Island democratic primary! Thanks to Bernie Sanders--a man who has a proven record of fighting for equality and justice his entire life (just look at his various speeches over the years)--I am now keenly aware that the middle class has been shrinking and the rich are getting richer and the poor are getting poorer. And, frankly, our political system is corrupt.

Our children's future
I started thinking about my children's future: what kind of world are we going to leave them and their kids? Bernie's idea of tuition-free public universities is sounding pretty darn good right now. So is his idea of universal, single-payer healthcare. Not to mention his deep commitment to addressing climate change. I want the world to be a better place for my children, not a dark, dystopian future that we see in popular fiction like The Hunger Games, where an oligarchic "Capital" controls the masses through fear and propaganda for its own gain.

But in order to make any of these things happen, we need to get big money out of our political process. It's not democracy when anything other than the will of the people takes precedence. Yet the influence of big money and special interests has become standard operating procedure in our country. Bernie wants to fix the system and restore our democracy.

A more compassionate society
Former President George H.W. Bush once said he wanted a "kinder, gentler nation." It was a noble goal, but one that he was unable to achieve, nor has anyone else since. Why? Because the people we have elected to the highest office are not people of clear conviction and integrity that inspire others to be better human beings. Remember the line in the movie As Good As It Gets when Jack Nicholson says, "You make me want to be a better man"? That's the kind of feeling I'm talking about. To inspire that in others you must set the example--and Bernie Sanders is doing that all over this country. 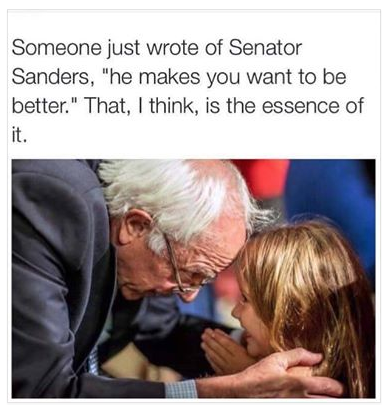 As a Bernie supporter, I have noticed an amazing thing starting to happen. Through the incredible immediacy and intimacy of social media, people are connecting with each other. There is a sense of community--an American community--that doesn't seem to have existed before. As I watch voting results come in across the country, I am deeply grateful to the people in those states for having the courage to vote for change, to vote for hope, to vote for integrity. I felt a glimmer of one-ness with my fellow citizens I had never felt before--like we are all in this together. And that is at the core of Bernie's message. We are one people. Let's help each other. Let's do the right thing. Let's stop the "me first" attitude that rears its ugly head so often in our daily lives.

Why we need a political revolution
It takes a lot of courage to change. But I believe that Bernie is the catalyst for truly bringing about the reform we need in our government and our society. His political revolution embraces the inherent principles of democracy, which is what the United States of America is supposed to uphold: Government of the people, by the people, and for the people. We have strayed and it's time to get back on track. Bernie is the only candidate who can make that happen.

Our ancestors fought for the freedoms many people now take for granted--the right to vote. The right to life, liberty, and the pursuit of happiness. The right to be accepted for who you are.

I am just one voter. One American citizen. One mother who wants the best for her children. And that is why I am voting for Bernie Sanders.

Back to the Grief Connection
So... last night I was sitting in the meeting listening to people talk about their grief and something clicked.

For those of us who have lost a child, one of the most difficult things to cope with is the cruel unfairness of it. Children are not supposed to die before their parents. After nine years, I still find it impossible to accept Natalie's passing. It is just wrong.

With the wrongness of losing a child comes a feeling of powerlessness. There was nothing we could do to save her. And hope dies, too.

When Bernie Sanders announced his candidacy, on a level buried very deep inside, I saw an opportunity for hope and I was compelled to do something in a way I never had before in my life. And so political activist Beth emerged. It came from a deep need, an all-consuming craving, for there to be some fairness, some justice in this world.

Natalie is gone. My only hope for her now is that her memory will live on among those who knew her and those who may be touched by her life. But I can still hope for a better future for my other two children, for my fellow citizens, and for our planet. I know it's an uphill battle. But does that mean we shouldn't try?

My very insightful and caring husband
When I shared my revelation with my husband after the meeting, I was surprised and touched that he seemed to have understood my motivation all along. Last summer, he had expressed concern over me getting too invested in Bernie because he saw from the beginning how it was connected to Natalie and he didn't want to see me get crushed. (Like many people, he was skeptical that Bernie could overtake the enormous power of the political establishment.) I am humbled by his insight. Sometimes those who love us know us better than we know ourselves. It just took me longer to figure it out. I am grateful to him for that and so much more.

And I'm pleased to report that he has joined me in feeling the Bern!