My daughter Grace passed away in September 2010. There wasn't an obituary. There wasn't a funeral. There wasn't a casket or even a body to put in it. No one sent me sympathy cards. No one brought me casseroles. But that wasn't because no one cared. It was because my child was still alive.

When my daughter came out to me as transgender at age 12, I was driven by fear. I feared that my child would kill herself if she couldn't begin her transition from my daughter to my son. That fear and longing to save my child overtook everything else. I forged ahead into a new life and helped her transition. I didn't expect to feel such grief. C.S. Lewis said, "No one ever told me that grief felt so like fear."

I had to put away all the girl pictures. I had to get rid of any sign that Grace had ever existed. I had to remember to call my child by the name that she had chosen: Chris. I had to replace "she" with "he." I had to start calling the child I thought was my daughter my son.

I distinctly remember crying one Saturday afternoon in bed, mourning the loss of my daughter. Grace came in and hugged me. "Mom, if this is going to be so hard for you, I won't do it," she said.

I looked into her eyes and saw such fear. I knew that she needed to transition to alleviate the pain in her heart. But she was willing to keep going through that pain to spare me pain. I thought about what a great kid I had, and about the fact that what I loved was her heart and soul, not her gender. "No, I know you need to do this," I said. "And I'll be OK. Just give me time."

She looked so relieved. "Thanks, Mom," she said. "And we'll get you help too."

Grace slept in bed with me that night. When we awoke I found her staring at me pensively. "What are you thinking about?" I asked.

"You have a really big nose," she said.

I burst out laughing, and so did she. She and I had always used humor to get through life, and I needed it now more than ever. I realized that no matter what, my child would be the same honest, wisecracking kid I'd grown to know and love. I knew in my heart that we would both be OK.

By far the biggest milestone and the happiest tears came on April 11, 2014, when my son had "top" surgery to remove the breasts that had been torturing him. I knew he would be happy after surgery, but I had no idea how happy he would be. If there was ever any question as to whether I had done right by my son by allowing him to transition, it was squashed that day. I saw the pure joy in his eyes as he awoke from surgery to discover that, as he puts it, his dream had come true.

"They are really gone," he marveled. Still in recovery, he held my hand and said, "Thank you, Mom. I love you. I am sorry that I don't tell you enough how much I love you."

Now, admittedly, he was pretty drugged up. But having a transgender teen doesn't give you a pass on having to deal with typical teenage behavior, so hearing such praise can be a rarity, and I've milked it as much as I can. If he's annoyed with me, I remind him, "Remember what you said when you woke up from your surgery?" I think I can get a lot of miles out of that one, or at least I'll try.

A funny thing happened along the way. My fears dissipated, because my son was joyful. He was smiling, laughing and beaming with a confidence that I hadn't ever seen. He was being who he really had been inside all along: a boy. I believe my child was always a boy and my son. As a matter of fact, not only was he my son, but along the way he had become my hero. And he and I formed a closeness that I hadn't anticipated.

The most important lesson I take from the toughest journey I've ever experienced is that there is hope. I know my son can have a happy, productive life, and for that I am grateful.

(I am a moderator of a private Facebook group for parents and family of transgender kids, young and grown alike. We now have over 700 members worldwide. We have a very tight-knit, supportive group. You can feel free to send me an email at transparentmary@gmail.com to request to join our group.)

Grace is gone, but Chris is very much alive. I am grateful every day that he is my son and that I was lucky enough to be chosen to be his mom. It is an honor that I cherish.

There wasn't a funeral; instead, there was a birth announcement. I gave birth to my child again, but this time in the correct gender. 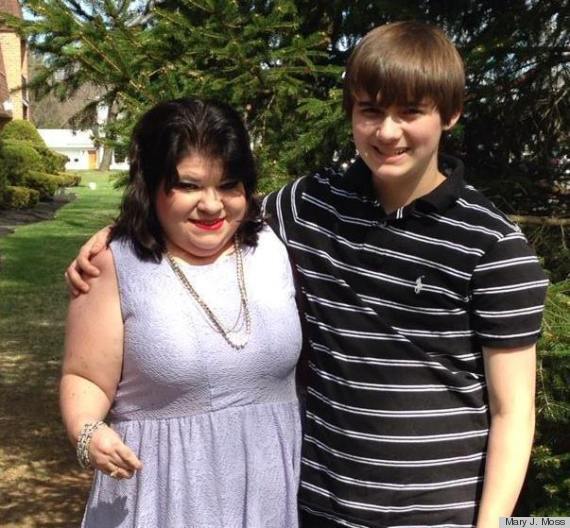 Mary J. Moss is a feisty single mom to a terrific 15-year-old boy who just happens to be transgender.