So now that the ball has dropped in Times Square and all those flower-covered floats have rolled through downtown Pasadena, that then means we can officially put the 2015 holiday season behind us ... right?

Not according to the folks who run the Disney and Universal theme parks. Where Christmas will continue to be celebrated through January 3rd.

Now before some baby boomer out there decides to play their " ... it wasn't like this when I was growing up," let me point out here that -- back in 1955 (i.e., the very first year that Disneyland Park was open to the public) -- that theme park had an old fashioned Christmas Festival which ran from November 24th through January 8th. 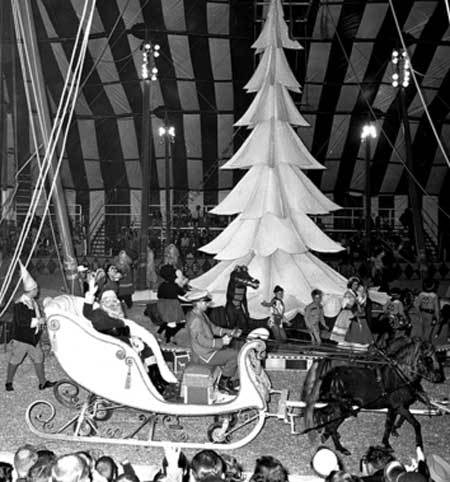 According to a 60 year-old press release, " ... thousands of lights and marvelous festive decorations of every kind will make Disneyland's entire 60 acres a glittering fairyland of fun and thrills ... A Christmas theme will be found throughout Disneyland. Even aboard the sternwheeler Mark Twain, you'll find a Christmas tree."

The real highlight of this six week-long holiday-themed celebration was the Mickey Mouse Club Circus, which was presented in a special heated tent that was erected close to where Disneyland's Matterhorn stands today. This indoor extravaganza (which was presented twice-a-day on weekdays and three-times-a-day on weekends and holidays) climaxed with " ... the Santa Claus parade featuring The March of the Toys including all the famous Disney characters." Oh, and did I mention " ... the magical Christmas tree," which grew right before the guests' eyes out of that circus's center ring?

So as you can see, Disneyland Park went hardcore for the holidays right from the very beginning. Whereas Universal Studios Hollywood (which first started loading tourists on "Glamour Trams" for a tour of their 230-acre backlot back in 1965) took a couple of decades before it finally really fully committed to Christmas. 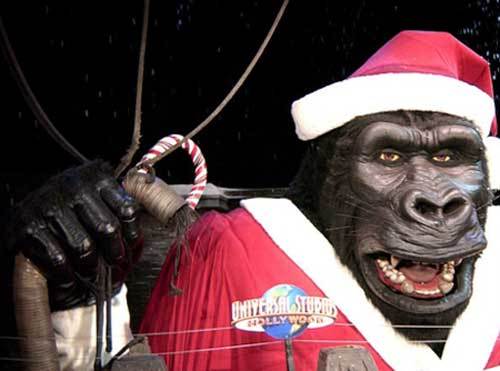 Oh, sure. The USH team would periodically try and find fun new ways to celebrate the season at Universal City. These including taking that 30 foot-tall, 7-ton animatronic ape that guests could see as their tram rolled through that theme park's old "King Kong Encounter" and then dressing him in a Santa suit.

But all that changed in November of 2000 with the release of Universal Pictures' The Grinch. This Ron Howard film -- which used both the children's picture book version of Dr. Seuss' "How the Grinch Stole Christmas" as well as the Chuck Jones-produced holiday TV special as the jumping-off point for a big screen fantasy -- was just what the folks who run Universal Parks & Resorts had been looking for. Which was a genuinely memorable collection of characters & settings that they could then build that theme park's holiday programming around.

It wasn't 'til 2008 that Grinchmas got genuinely grand at Universal Studios Hollywood. That was the first year that this theme park began giving its guests the chance to explore Who-ville. Do strictly-for-the-holiday-season things like frolic & freeze in the Grinch's Winter Playground (which was filled with real snow). They could also try their hand at holiday cookie decorating or participate in a nightly lighting ceremony which was held in front of a 40 foot-tall version of the Who-ville Christmas tree. 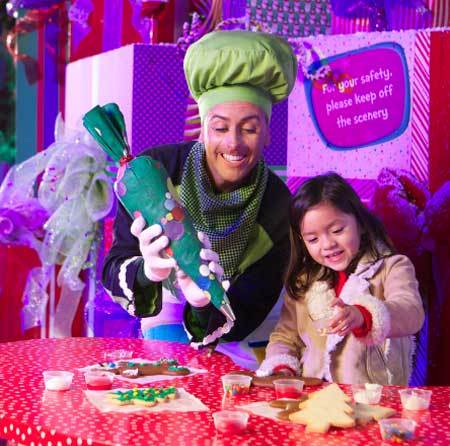 Mind you, this Who-liday celebration wasn't confined to USH's Upper Lot. Guests who climbed aboard this theme park's world-famous behind-the-scenes Studio Tour also got in on the Grinchy fun. For when their tram arrived at the part of the backlot tour where the original sets from this Ron Howard film were on display, these visitors are then treated to a show stop moment. Where a gaggle of Whos suddenly appeared and begin re-enacting popular scenes & songs from that Universal Pictures release.

And just like the Grinch's small heart (which -- let's remember -- grew three sizes the day he learned that maybe Christmas didn't come from a store), Grinchmas at Universal Studios Hollywood just kept bigger with each passing year. Especially on the heels of the August 2013 opening of Universal Plaza (i.e., that 37,000 square-foot grand piazza area that was built at the very center of this theme park as the first phase of USH's five year-long transformation of its Upper Lot), the Who-ildays at Universal City have continued to expand their seasonal footprint.

These days, the Dr. Seuss-inspired decorations actually start outside of this theme park. So -- as guests make their way from Universal CityWalk to the Universal Studios Hollywood arch during the holiday season -- they then find that this theme park's entrance plaza has been transformed in a forest filled with twisty Christmas trees. With the idea being here being that this additional layer of Grinchmas theming will make it possible for USH visitors to get that festive feeling from the second they enter this theme park 'til the moment they leave. 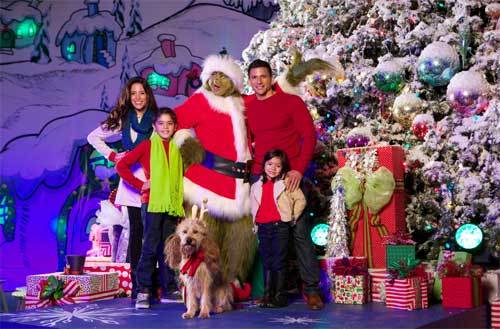 Of course, the festive firs out in front of Universal Studios Hollywood pale in comparison to the 60 foot-tall Grinchmas tree which towers over Universal Plaza. It's here that USH really demonstrates its skill when it comes to translating a property from the screen to a theme park setting. Here -- as guests explore the multi-facted version of Who-ville that's been set up around the Grinchmas tree -- they can interact with the Grinch, his faithful dog Max as well as a cadre of elaborately costumed performers who play the citizens of Who-ville.

And given that these performers have to work in prosthetic appliances which then replicate the look of that Academy Award-winning make-up which Rick Baker created for The Grinch, these Universal Studios Hollywood employees have to really commit in order to take part in this theme park's holiday program. And yet -- in spite of the amount of time & pain that's involved with first applying and then removing all of these elaborate Who make-ups -- many of these folks come back year after year, eager to be a part of USH's Grinchmas celebration.

"We've got an amazing make-up team here at Universal Studios Hollywood. People who are the very best in the business when it comes to taking a character that you've seen up on the screen and then changing that into something that one of our performers can wear as they go out into our theme park and interact with our guests," said Stephen Siercks, director of Entertainment Production for Universal Studios Hollywood. "That's why experiencing Grinchmas has become a real holiday tradition out for a lot of people. They seem to really appreciate that we're constantly looking for ways to improve & grow our Who-liday programming." 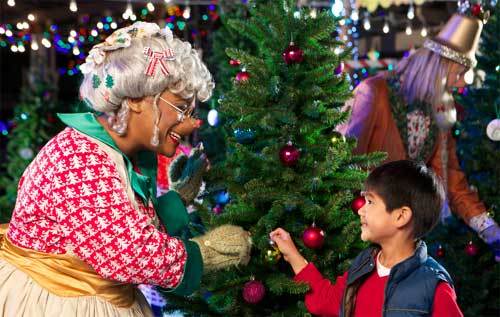 And speaking of improving USH's Grinchmas ... It's worth noting here that Illumination Entertainment (i.e., that subsidiary of Universal Studios which has produced super-popular animated features like Despicable Me and Minions) is currently working on a brand-new CG version of Dr. Seuss' How the Grinch Stole Christmas. Given that this Peter Candeland film is supposed to be released on November 17, 2017 (which will be just one week shy of the 70th anniversary of the original publication date of this picture book), can we then expect to see elements from this upcoming animated feature to become part of Universal Studios Hollywood's Who-liday celebration?

"We're always looking for ways to plus our holiday entertainment programming here at the park," Siercks said diplomatically.

So if you're still not quite ready to say goodbye to the 2015 holiday season, why not consider swinging by Universal Studios Hollywood this weekend? Where -- thanks to Ron Howard's The Grinch -- this theme park finally has a Christmas to call its own.