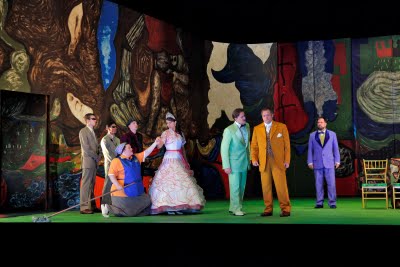 Director Peter Sellars has forged a strong reputation for envisioning contemporary operas and rethinking classic ones. Of present day fare, John Adams' Nixon in China, in both its original and revived versions, may be the most iconic. Notable among the classics are the Mozart-Da Ponte collaborations and several of Handel's operas including the Chicago Lyric's recent Hercules.

Sellars can be uneven. His over-produced stage version of Adams' oratorio, El Niño, of a decade ago comes to mind as well as his under-produced George Crumb song cycle of just this past June at the Ojai Festival. There are times when the trademark extravagant explanations that are a standard part of the Sellars production package lead only to visual confusion and stingy stage-crafting.

Such was the case with Antonio Vivaldi's long-forgotten Griselda, now in production at the Santa Fe Opera. I will review it from three perspectives: as a work, a production, and a performance.

Work (**½) Venice was Opera Central in the eighteenth century and the sybaritic Venetians attended operas like today's crowds flock to rock concerts. Antonio Vivaldi got into the action frequently; about fifty of his reported 95 operas survive. Superstar Cecilia Bartoli's advocacy in concerts and recordings some years ago has stimulated a European revival of the composer's operas. The phenomenon now crosses the Atlantic in the new U.S. production of Griselda at Santa Fe.

The story of the long-suffering Griselda, Queen of Thessaly, comes from Boccaccio's Decameron (also retold in Chaucer's Canterbury Tales). In Vivaldi's version -- with a libretto by an up-and-coming 25-year-old Carlo Goldoni -- longstanding public objections to King Gualtiero's marriage to a commoner prompt him to publicly test Griselda's loyalty. He had already removed their daughter Costanza from her mother at birth fifteen years before and he would to do the same with their son some years later. Now he dismisses his wife from their marriage and her royal place as his queen and casts her out to live in a cave. Griselda grieves but never questions her husband's judgment.

Perplexing twists and turns in the plot, some hard to decipher, give rise to 'simile' arias of metaphorical comparisons with nature that explore extreme states of alienation and emotion. Vivaldi throws down a gauntlet to his six principals with agitated bravura passages in regions stratospheric to cavernous. Ears may weary of the long recitatives and harmonically static arias, some recycled from earlier operas. As a dramatist Vivaldi was no Handel, but if the Venetian's formulas seem a prescription for tedium, his gifts for melodic variation, string sonorities, and dramatizing emotions through vivid arias more than compensate.

Why this story? It may come across as borderline sadistic, but Boccaccio's yarn is an updating of the Greek myth of Medea, another female victim who lost her marriage and her position, but who murdered her own children in revenge. Rather than follow the latter's example into violence, Griselda's turning the other cheek replaces "primitive" behavior with the medieval Christian ethos of faith and self-control. Boccaccio modernized the story from its savage roots, even if Vivaldi would later exploit it for his audience of jaded Venetian thrill-seekers.

Design clashes aside, the actual dramaturgy looked as if produced on a shoestring. With the stage empty save for a couple of chairs, the actors had little off which to play. Stock movements -- including stylized gestures seen in other Sellars productions -- produced clumsy character interactions. Gualtiero was given cruel and arbitrary gestures that mimicked Latin American macho stereotypes. But would he really have called for swat-teamed henchmen with M-16 rifles to threaten his courtiers? His sham test is, after all, only a temporary ruse to prove a point, and many in his kingdom are already in on the game.

In SFO's Crescendo magazine, Sellars states of the East L.A. based Gronk: "When you ask an artist to paint, he sees things in his own way; I have not told him anything. When different art forms meet, they inspire one another. The singers are alive inside the spectacular universe of the painting." The question that follows: were the elements of this mise en scène -- set, costumes, and lighting - conceived independently, meeting only when they collided on stage? In this jumbled production the answer would seem to be yes.

Performance (***½) The singing of five young principals and a mid-career one almost redeemed Griselda's production problems. Supported by a only a string orchestra, they were fearless in the face of Vivaldi's merciless, but also beautiful, vocal challenges. 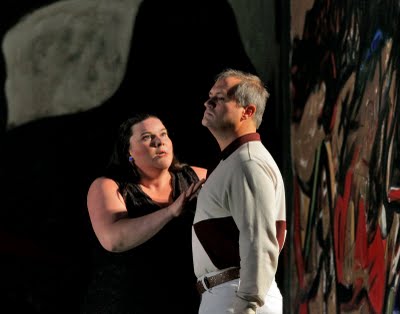 Contralto Meredith Arwady's title character is the medieval version of a battered wife. At one point Griselda is recalled to the palace to become a maid for Costanza, who Gualtiero represents as his new bride. Griselda is unaware she is actually their daughter. The portrayal of calm acceptance to these indignities required a thespian's full craft.

Arwady's star role here was not particularly a gratifying one, with Vivaldi giving her few good arias and only contrite recitatives. One of her special moments, however, comes at the end of Act One when her 'Ho il cor già lacero' (my heart is torn to pieces) is broken up with rests, an effective musical analogy. Sellars also provided Arwady with some interpolated vocal relief by inserting the first part of Vivaldi's Stabat Mater for the less worthy of her later arias. Arwady made the most of what she was given. To hear her deep and true contralto plunge the vocal depths was to follow Jules Verne on a journey to the center of the earth.

Stalwart tenor Paul Groves, a regular at the SFO and survivor of last year's unfortunate Tales of Hoffmann, was a commanding dramatic presence as Gualtiero, his voice strong if not completely comfortable in the rapid vocal figurations of the Baroque style. Had he been given more stage business to telegraph his transition from jack-booted martinet to empathetic husband, his characterization might have come across as even more interesting. 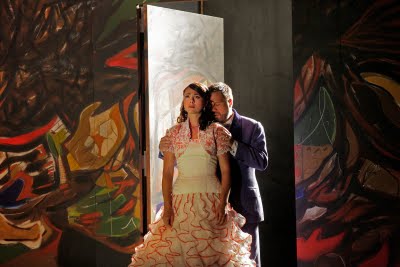 Mezzo-soprano Isabel Leonard soared as a vocally dazzling and attractive Costanza, who is devastated to learn she must marry the king (not knowing he is her father) in lieu of her beloved Roberto. A highlight was her Act Two "Agitata da due venti' (comparing love and duty to two contrary winds). Whether standing, kneeling, or writhing on the floor, she sang in consummate Baroque style, stunning in both legato and coloratura passages, and rich-voiced up and down the register. A major operatic star has arrived on the scene, and the Santa Fe Opera captured her talents in a breathtaking, breakthrough role.

Surrounding Costanza dramatically were two countertenors. David Daniels was the honey-voiced Roberto, her lover and protector, torn in his loyalty to the king by the prospect of losing her to him in marriage. (Daniels remains the gold standard of our time for a pure-toned countertenor.) Yuri Minenko, as his brother, Corrado, knowing the sham marriage was just part of the test, added silvery-smooth vocal assurances for some kind of a happy resolution to the lovers. His Act One 'Alle minacce di fiera belva' (with orchestral horns) casts his mission as a hunter who will pursue his prey relentlessly -- in this case, Ottone. 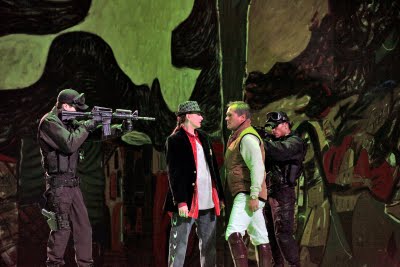 Soprano Amanda Majeski was riveting in her fedora-sporting trouser role as Ottone, in love with Griselda and nominally the villain for opposing the king's harsh treatment of her. Ottone's 'Scocca dardi l'altero tuo ciglio' (the heart is a butterfly drawn to lamplight) projected all the ardor and agony of this character's conflicted feelings toward king and outcast queen. Also notable: 'Vede orgogliosa l'onda' (a lover's persistence like a helmsman trying to reach land in a raging sea).

Making his company debut conducting without baton a slimmed-down Baroque string orchestra, Grant Gershon was placed high on his seat to maintain eye contact with the occasionally horizontal singers on stage. The cast's confident vocal performances confirmed the security they must have felt under his leadership. Gershon's control of the orchestra was also firm and fluid. Momentary appearances of horns in two arias added color; trumpets in the finale bestowed a festive send-off to the work's not entirely convincing happy ending.

In the most inspired production touch of the evening, the totally confused but recently restored Queen Griselda, alone on the stage after all have departed, continues to sweep up after her subjects and her husband.

It was the singing, however, that saved the day for this Griselda.

All above photos by Ken Howard, used by permission of the Santa Fe Opera.
Rodney Punt may be contacted at Rodney@artspacifica.net