Selling an Old Navy item called "pop pants" -- the color's pop, apparently -- Chase once again embodies Clark Griswold, well-meaning idiot and patriarch of the Griswold family. The commercial goofs on the famous scene in "Christmas Vacation" when Clark tries to plug in the Christmas lights on his house to varying degrees of success. D'Angelo and Lewis, as, respectively, Clark's wife and daughter, are there to lend support and eyerolls.

This isn't the first time in 2012 that Chase and D'Angelo have reunited. The pair, along with Dana Barron and Anthony Michael Hall, got together for the 29th anniversary of "National Lampoon's Vacation" in October. That film, the first in the "Vacation" franchise, was release in 1983; "Christmas Vacation," with Lewis taking over for Barron in the role of Griswold daughter Audrey, hit theaters in 1989.

The ever-present Old Navy ads won't be the only chance to see Chase on television in the coming months; he also co-stars on "Community," this despite parting ways with the series last Wednesday. Before exiting, Chase shot a significant portion of the show's fourth season, meaning his polarizing character will be present when "Community" returns in January.

Watch the Old Navy ad above. 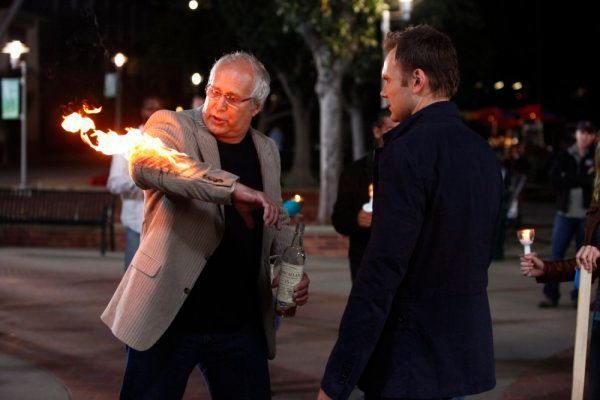 1 / 11
11 Reasons Pierce Hawthorne Should Be Killed Off 'Community'
1) Seeing the character killed off in hilarious fashion would provide some cathartic healing for "Community" fans after the series' many ups and downs.
NBC