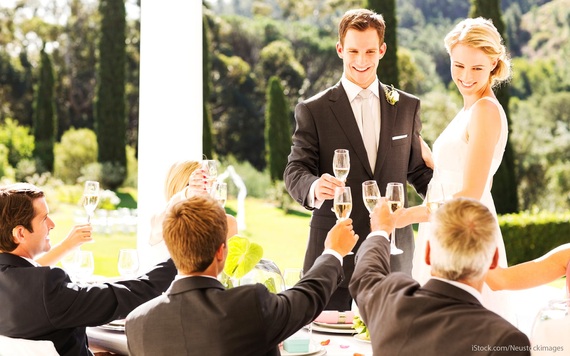 The cost of weddings just keeps going up -- for everyone. On average, couples spent $32,641 in 2015 for their special day -- an all-time high, according to wedding resource The Knot's 2015 Real Weddings Study. But weddings aren't just pricey for the bride and groom. Bridesmaids and groomsmen shell out big bucks for their roles in weddings, too.

To find out exactly how much wedding party members are spending, GOBankingRates asked men and women across the nation who've been in weddings recently what they spent on clothing, gifts, parties, and other expenses related to their bridesmaid and groomsman duties.

The results are surprising, not because of how much people are spending to be in weddings but because of who is spending the most. "We actually found that groomsmen are spending more money, especially when it comes to the bachelor party," said Kristen Bonner, the GOBankingRates research lead for this survey.

So if you're asked to be in a wedding, consider these costs -- and whether you can afford them -- before you say, "Yes."

4 Surprising Facts About the Cost of Being in a Wedding

The cost of being a bridesmaid or groomsman can easily top $1,000, GOBankingRates found in its survey of more than 500 men and 500 women who've been in a wedding in the last three years. "Members of wedding parties have to pay for tons of expenses," said Benjamin Glaser, features editor with money-saving site DealNews. And certain members -- the groomsmen -- tend to pay more.

Across all categories of expenses related to being in a wedding, groomsmen spent more than bridesmaids, on average, GOBankingRates found. Here's how much more.

If you're going to be in a wedding, you'll likely be expected to wear a specific dress, suit or tuxedo. Unfortunately, this item can set you back a couple hundred dollars. GOBankingRates found that bridesmaids spent an average of $214.58 on a bridesmaid dress for the most recent wedding they were in. Groomsmen spent even more on tuxedos: $245.50 on average. 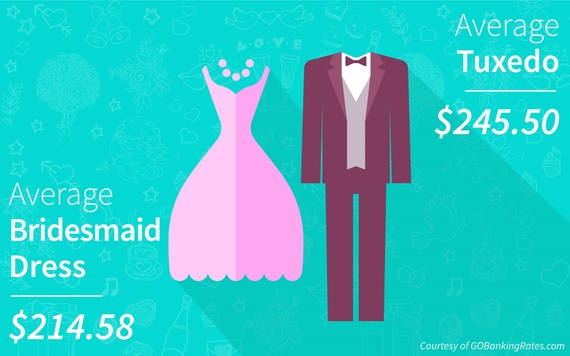 This amount tops the average tuxedo rental cost, which was $196 in 2015, according to WeddingStats.org. Younger groomsmen actually shelled out more for a tux than older groomsmen despite the fact that their average income is lower.

Just because the average costs are this high doesn't mean you'll necessarily have to spend hundreds on a dress or tuxedo, however. "Some couples are easing up, letting bridesmaids choose their own gowns in a matching color or asking groomsmen just to wear matching ties," Glaser said.

The biggest expense for both bridesmaids and groomsmen is the bachelor or bachelorette party. Groomsmen are especially big spenders, though, when it comes to helping the groom enjoy his last days (or hours) as a bachelor. 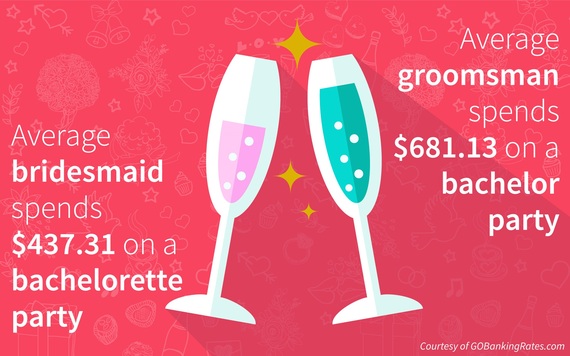 Although the average that male respondents reported spending on bachelor parties is $682.13, when you separate out the amount spent by men in different wedding party roles, the numbers are even more staggering. Groomsmen spent an average of $445.92 on the most recent bachelor party they attended -- including travel, food, drinks and entertainment -- but men who served as the best man in a wedding spent more than twice that much -- $998.78 on average.

The survey only asked for the total amount that was spent, not what the party entailed, such as food and drinks, items for bachelorette party games, and party favors. However, Bonner said the difference in spending between bridesmaids and groomsmen likely has to do with the way they're celebrating, such as men opting for pricier destinations and outings to bars or casinos.

Jessica Winstead, a 28-year-old living in Los Angeles, said she and her boyfriend recently went to a joint bachelor-bachelorette party in Las Vegas and spent more than $300 each for a hotel room, food, entertainment and gas. Even though they spent less than the average of those surveyed by GOBankingRates, they still spent more than $600 total just to help the bride and groom celebrate before getting married.

Similarly, Erin Lowry, founder of the Broke Millennial blog, said she spent about $300 for a recent bachelorette party she attended when she was a bridesmaid last year. The party wasn't in the city where she lives, so she had to pay for a flight and a hotel room.

Even though bridesmaids can end up buying two gifts for a couple -- a bridal shower gift and a gift for the actual wedding -- groomsmen still tend to outspend them. Although just 20 percent of bridesmaids surveyed by GOBankingRates said they spent $200 or more on gifts for the couple in the last wedding they were in, 31 percent of groomsmen reported spending $200 or more. 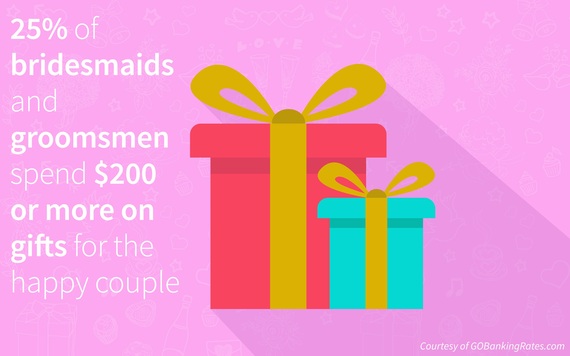 Men could be spending more because they might be more likely to give cash than traditional wedding gifts. The top wedding gift recommendation listed by online guides for groomsmen, such as BestManSpeechWriter.com and GroomGroove.com, is money. Women, however, might be more likely to buy a small gift on the couple's wedding registry or create a thoughtful, yet inexpensive, DIY gift.

4. About Half of Bridesmaids and Groomsmen Spend $200 or More on Other Costs

The cost of other things related to being in a wedding -- such as items for bridal shower games, shoes, makeup artist and hair stylist fees, and travel to and from destination weddings -- also can add up quickly for bridesmaids and groomsmen. 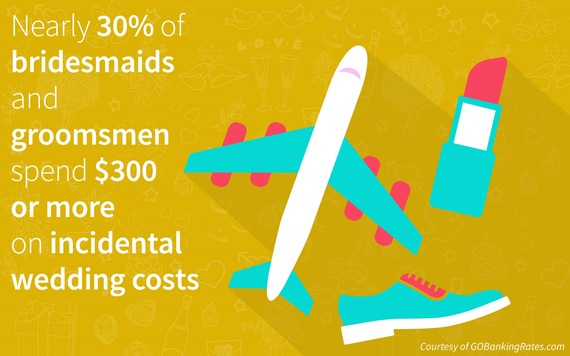 GOBankingRates found that 52 percent of groomsmen and 58 percent of bridesmaids kept additional costs associated with their wedding duties below $200; however, that means nearly half spent more than $200.

Lowry, for example, said she spent about $150 to have her hair and makeup done for the wedding she was in. Winstead said she spent $200 on shoes alone when she was a bridesmaid plus $75 for makeup and hair, $60 for a manicure and pedicure, $50 for jewelry, and $50 for food and coffee for the bridesmaids the morning of the wedding -- a total of $435.

Although bridesmaids reported spending less, on average, than groomsmen for the most recent wedding they were in, they were more likely to say that they spent more than they expected. About 32 percent of bridesmaids said the total amount they spent was more than they budgeted or expected to pay. About 28 percent of groomsmen said their spending exceeded their expectations.

"It certainly isn't cheap to be part of someone's special day, which is why I started a savings account specifically for other people's weddings," Lowry said.

"There are more ways to creatively stay within a budget today than there used to be," Bonner said. "For example, there are dress rental websites, online DIY tutorials for hair and makeup, and personalized gift ideas online."

How to Keep Wedding-Related Spending in Check

To help you ensure that you stick to a budget if you are in a wedding, GOBankingRates created a cheat sheet to give you an idea of how much bridesmaids and groomsmen are spending and to help you track your own spending. Download or print out the Wedding Party Budget Cheat Sheet and use it as a guide. 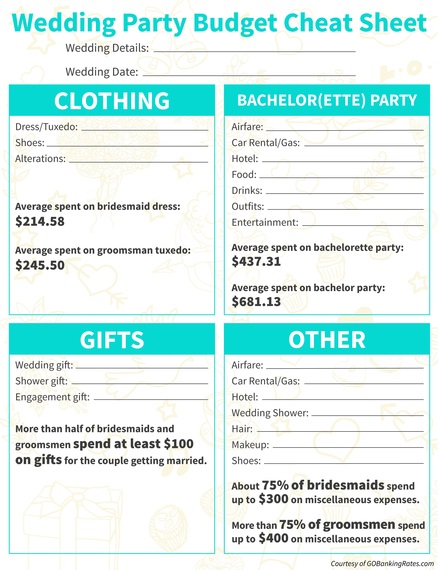 Keep Reading: How to Improve Your Sex Life by Saving Money

Methodology: This survey was conducted by GOBankingRates through Survata and collected 1,005 total responses ? surveying 502 women and 503 men ? from April 1-3, 2016, with a margin of error of 4.4 percent. The survey posed six questions to people who had served in wedding parties in the last three years about how much they spent on various costs associated with being a bridesmaid, maid of honor, groomsman or best man. GOBankingRates also analyzed the results using Survata's data on respondent ages.