DETROIT -- Police officers in the Detroit suburb of Grosse Pointe Park, Mich., have opened an internal investigation after a Detroit blog posted photos and videos that show members of the police force allegedly harassing African-American men, The Huffington Post has learned.

Motor City Muckraker, a Detroit blog run by Steve Neavling, a former Detroit Free Press reporter who now works for Reuters, published a post on Thursday that accused police officers in Grosse Pointe Park of capturing "humiliating photos and videos" of black men and sharing them with friends and family. Grosse Pointe Park, which shares a border with Detroit, is wealthier and predominantly white.

Neavling, who obtained the materials from an anonymous source, posted two videos that show African-American men singing and making animal sounds, allegedly compelled to do so by police officers in Grosse Pointe Park.

The blog also published this photo of a man riding in the back of a trailer that was allegedly taken by a Grosse Pointe Park officer and texted to others with the message, "Got to love the coloreds." 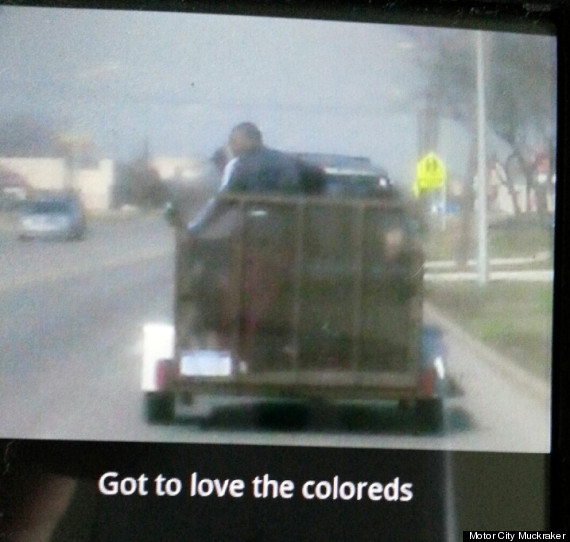 Neavling told The Huffington Post that he has almost a dozen similar videos, but he has elected not to share them at this time due to their "humiliating nature."

On Thursday, November 14 2013, the Grosse Pointe Park Public Safety Department was contacted by an individual who said that he was in possession of video clips and a photo of African American males. The video clips and photo are allegedly made by an officer of this department. The department has begun an internal investigation of this matter. The Grosse Pointe Park Public Safety Department does not tolerate unprofessional conduct by its officers when interacting with any citizen they may come in contact with.

Motor City Muckraker reported that multiple police officers were involved in the behavior shown in the videos, but it only named Grosse Pointe Park police officer Mike Najm as one officer who may have taken some of the photos and videos. Several people told The Huffington Post that Najm's ex-wife may have obtained the materials and distributed them.

Grosse Pointe Park borders Detroit's East Side, but the stark contrasts between the two cities' populations and wealth have been widely noted. Grosse Pointe Park, a suburb of about 11,500 residents, is 85 percent white, according to the latest census, and 49 percent of households have an income of $100,000 or more. In comparison, Detroit, with a population of 701,475, is almost 83 percent black, and the median household income is $27,862.