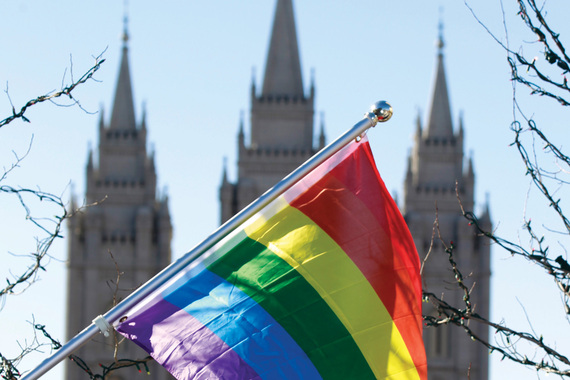 This week, several LBT groups have spoken out against including BYU in the Big 12 based on discriminatory language in the University's honor code.

The letter from Athlete Ally states "...[BYU] provides no protections for LGBT students. In fact, through its policies, BYU is very clear about its intent to discriminate against openly LGBT students, with sanctions that can include suspension or dismissal for being openly LGBT or in a same-sex relationship."

Admission to the Big 12, they maintain, flies in the face of the values of the conference itself, which is strongly LGBT inclusive.

But at the core of BYU's honor code is the stance of the Church of Jesus Christ of Latter-day Saints itself, who owns the university. Church policies on LGBT individuals have become increasingly draconian over the past few months, starting in November of last year when the Church announced a rigid stance on LGBT members.

Under that new policy, developed only months after the Church failed at its attempts to block legal marriage equality in the U.S.:

The policy, while problematic enough, was expanded upon in January, when Elder Russell M. Nelson, the president of the Quorum of Twelve Apostles and next in line to be president of the entire church, pronounced it a revelation from God, which gave it almost doctrinal status.

The "exclusion policy" (as it's referred to on social media) has prompted backlash from within the Mormon community itself, provoking thousands of straight and LGBT Mormons to officially resign from the church and untold others to walk away or diminish their involvement.

But while adults can choose to walk away, LGBT youth cannot. The policy places on the shoulders of LGBT youth an untenable Sophie's Choice: Either accept yourself as afflicted and broken as a result of your LGBT orientation, and live your life here in a state of quiet desperation and singlehood; or be among the lucky few who fall in love with someone of your own gender, have a family, and be expelled from the faith of your roots -- and along with it your family, for all time and eternity.

For some time, many progressive Mormons have drawn parallels between the Church's current predicament and its racist stance on blacks in the late 60s, when black men of African descent were forbidden to hold the priesthood. In fact, in a 1967 article in the Los Angeles Times, the church was referred to as "one of the few uncracked fortresses of discrimination" -- a phrase that could be lifted verbatim and applied to LGBT policies today.

History tells us that external pressure on BYU mounted -- with Stanford University refusing to participate in sporting events in 1969; and in 1970 with six other universities severing ties with BYU over the church's racist practices.

In the end, the pressure against BYU helped ensure church doctrine was changed. In 1978 the church lifted the ban on priesthood and granted it to all worthy males, regardless of race. The change was heralded as revelation from God; and while some reject that claim, I think revelation can be a mysterious thing, often working from the bottom up as well as from the top down -- or in this case, from the outside in.

Like with LGBT Mormons, top leadership really had no impetus to examine what they thought they knew about race until they were tugged firmly enough on the sleeve and told, "Hey, what we have today isn't working anymore. Can you pray for additional guidance?"

But there's an important difference that makes change much more urgent in this case: No one ever reported African American members ending their own lives as a result of the ban on the priesthood.

Let's consider BYU's likely exclusion from the Big 12 another tug on the sleeve of church leadership. Appealing to the moral goodness of our leadership to become more Christlike and change the anti-LGBT policy hasn't worked. Perhaps this will.

And let's not be so quick to do what we always want to do inside Mormonism, and proclaim ourselves victims for righteousness'' sake and our willingness to stand against worldliness.

For it's far more likely what we're actually experiencing is the consequences of our own ignorance and intolerance. Just like in the 60s and 70s, this may well be our Savior's way of helping us see that when it comes to how we treat and understand LGBT individuals, we have a long way to go.