Nostalgia and superstition are guilty pleasures, and one time we allow ourselves to indulge in them, albeit with titters of embarrassment, is on Groundhog Day. This comes on February 2, when the groundhogs allegedly come out of their burrows. If they see their shadows, they will be frightened and return, in which case winter will last for another six weeks. Thousands of people gather around the burrows of famous groundhogs, most notably Punxsutawney Phil in Pennsylvania, and newscasters film their ascent. Officials dressed anachronistically in top hats and frock coats mark the occasion with speeches. Should the groundhog decide to stay, they hold him up for the crowd to see. Critics allege that the result is predetermined, or at least manipulated, by heaters that are placed under the ground.

Groundhog Day goes back to societies in which agriculturalists watched for subtle signs such as the migration of birds or the emergence of animals from hibernation to decide on the best times for planting and harvesting. In England, Germany and Ireland, the prophetic animal is a badger rather than a groundhog. At one time, it was probably the bear, a more imposing creature that probably endowed the day with greater dignity. In Lithuania and parts Italy, it has been a snake.

The idea of using animals to predict the weather, or even climate change, is not by any means irrational. Following an old tradition, the Chinese still use goldfish to predict earthquakes. In Italy in 2009, toads in very large numbers were observed leaving their burrows in Acquilla several days before an earthquake, and scientists who have studied this maintain it was probably due to the release of gases caused by seismic activity. Animals such as bears and groundhogs may be very sensitive to subtle changes in the thawing of the soil and other possible signs of spring. But, for traditional farmers, these indications to the changes in the weather were read in the context of many other clues. A bit like the animals themselves, they cultivated an intuitive sensitivity to climate, which almost everyone today has lost. Furthermore, they did not use the emergence of animals from hibernation to predict the weather in vast geographic areas but only in the local community.

Groundhog Day is set on the same day as the Roman Catholic and Eastern Orthodox celebration of Candlemass, when lights are lit to celebrate the presentation of Jesus, "light of the world," in the temple. The slightly nervous laughter that usually accompanies Groundhog Day, may reflect a Protestant mockery of Catholic rituals. But Candlemass itself goes back to the traditional Celtic celebration of Imbolc, the beginning of spring, which was also set in the first days of February.

With irony, and even a little sneering, Groundhog Day celebrates a rural way of life, which we can now barely remember, yet somehow miss. It is a loss we hardly name, yet still feel intensely. Holidays are times set aside to reflect on the meaning of our past, and Groundhog Day, while seemingly trivial, turns out to have a history as old and complex as perhaps as any commemoration that we have.

Our nostalgia will not long be satisfied by a few top hats and campy homilies. Groundhog Day holds a secret, more concealed than any subterranean stove -- the groundhog represents humanity, as we confront a profoundly uncertain future. From time to time, we contemplate our prospects, like the animal emerging from its burrow. If they are too terrifying or confusing, we return to our hole, to watch Survivor on television or surf the net. 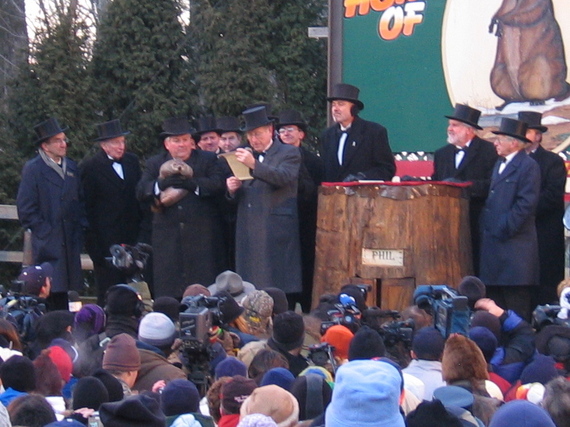