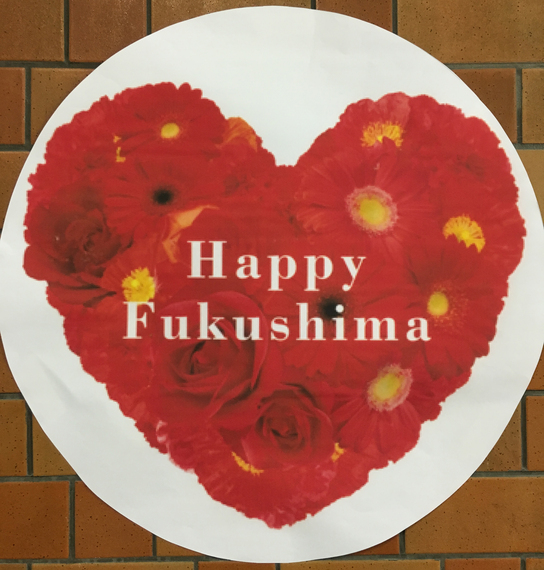 Signs covering Fukushima Station are a distraction from the fact that 100,000 people are still displaced in the Prefecture.

Burn clothes: Wear 'em, toss 'em. That's the spirit in which Beth Balaban and I packed for our final filming trip to Fukushima for Son of Saichi. We also brought burn pillows, burn shoes, burn socks, burn slippers, burn blow up mattresses... Safe to say, nothing in our suitcases is coming home with us.

On our previous three trips we've stayed outside the evacuated contamination zone, traveling in and out for brief periods daily. This time we're staying inside Yamakiya, a village evacuated after the earthquake, tsunami and nuclear power plant meltdown five years ago. And even though radiation levels here aren't of the sci-fi-turn-your-skin-neon-green variety, scientists we've talked to admit that even after being part of the nation's $10 billion clean-up effort, it's still not a place they'd want to live.

Yamakiya's evacuation didn't come right away after the March 2011 disaster. It came a few months later when prevailing winds and seasonal rainfall took a toxic road trip, traveling like the Shinkansen over hills and valleys, and along Rte. 114 past the home of Hidekazu Ouichi, a lifelong farmer and son of Saichi, a Hiroshima survivor.

We're here now because Hidekazu got word from the government late last year that he could - finally - move back home April 1st. But when he picked us up from the Fukushima train station, we found out the government has changed its mind again about lifting the evacuation orders. No, they now say, he can't move back until September.

He's moving back anyway. Another 31 families are, too. (Most former residents are rejecting any offer to live here.)

On the 30-minute drive to Yamakiya, I realize I'm more worried about what's measured in pixels and decibels than becquerels or microsieverts. There's a television screen embedded in the dashboard of Hidekazu's new Toyota, and Japan's national obsession - cute, quirky mascots - are on full display. Eyes on the road, Hidekazu! 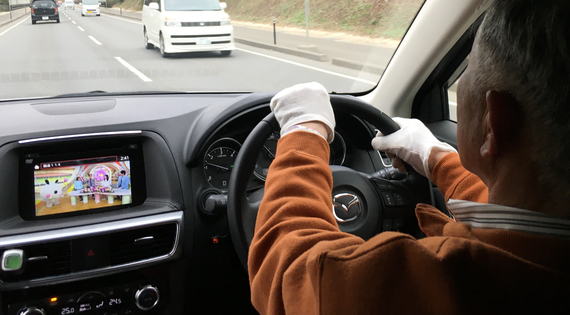 Now that he's home, Hidekazu finds it hard to break his lifelong habits and those of his ancestors. The family farm has always been land to live off, always a place of sustenance, and it's difficult for him to see it any other way.

That's why we're not surprised when he opens the freezer to show us feet from a wild boar he and his friends caught in the backyard. A ghost town for the past five years, this area became overrun with wild animals - especially boar which Hidekazu says have gotten so used to gallivanting around town that "they roam freely inside abandoned houses, and come right up like a dog and wag their tails at you." 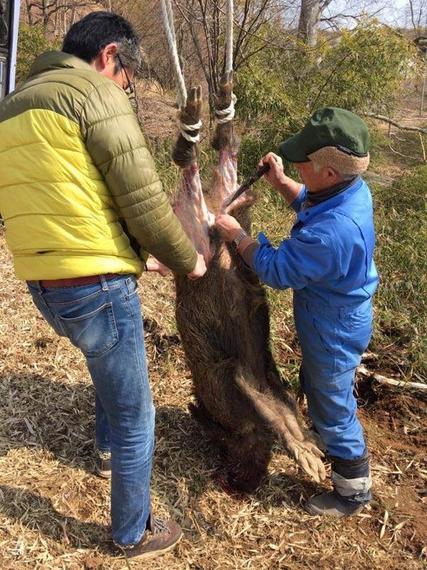 The bad news is that wild boar - tasty as their feet might be - eat mushrooms which are among the most contaminated plants in Yamakiya's forest. Cesium builds up inside the body of boars because of it. When Hidekazu tested this boar to see just how radiated it was, he measured 12,000 becquerels. (One becquerel is defined as the decay of one atom of a radioisotope per second. So if your Geiger counter detects the radiation of one decay coming from a sample - say, a boar - in one second, then that sample has one becquerel of radiation.) 12,000 becquerels is astronomically higher than the 500 allowed by the government. 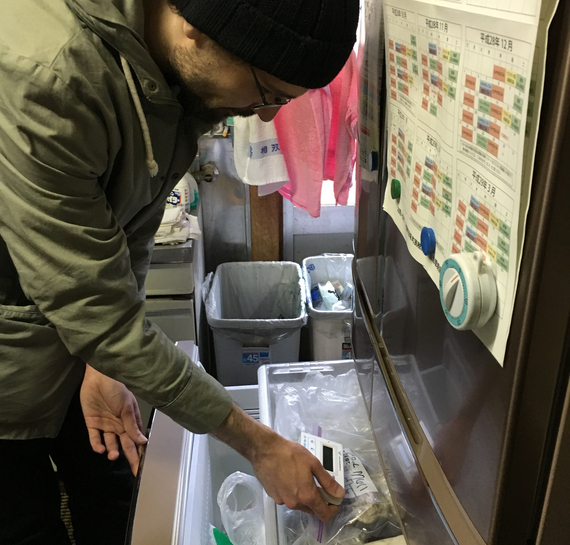 Hidekazu offered to cook the feet up for us for dinner. We politely declined.

Oh, who am I kidding? We told him he was crazy and there wasn't a chance in hell we'd eat it, and neither should he! But if our previous trips have told us anything, it's that Hidekazu will eventually convince us to eat or drink something that will surprise us and amuse him. I suspect it's just a matter of time before the killer bee liquor comes out of the cabinet.