What was on your holiday wish list?" If you're over 50, advertising and marketing executives think it's the same things that have been on the list of 50-plus consumers for the past five decades -- not much and not very exciting.

Amazingly, most "experts" still subscribe to the outdated and outright ridiculous belief that all 50-plus consumers are poor, overly frugal, highly technophobic and averse to switching brands. As a result, they spend all of their efforts trying to attract 18-year-olds with little money and attention spans roughly equivalent to the squirrels in my back yard.

The notion that 50-plus consumers are extremely brand-loyal and therefore not worth targeting with marketing dollars defies common sense. The truth is, we are less brand-loyal than ever because we're smarter than ever. We know how to research. We've learned that the shiniest object isn't necessarily the best object. We don't purchase to impress. We purchase to get high value and utility and because we have many new interests, we have many new needs.

Most of the brands I buy didn't even exist 10 years ago. My Christmas wish list this year included: a Garmin Forerunner 410 GPS watch, an Amazon Kindle, an Apple iPad, a Roland electronic drum set, a Flip camera, a Finis Swimp3 waterproof MP3 player and Joby Gorillamobile for iPhone. I'm pretty sure I wasn't marketed to by any of these companies.

How dismissive are television advertisers and marketers when it comes to the 50-plus demographic? Enough that Nielsen ratings come to a screeching and premature halt at age 54. And because Neilsen doesn't track ratings over age 54, your local television station doesn't care what you think. Literally. When the station does market research, the first question they ask is, "How old are you?" If the answer is over 54, they discontinue the interview. That made sense two decades ago. Today, it's so laughable that it could be an SNL skit.

NBC Universal recently called a press conference to report that its new research reveals that the 55-to-64 demographic is as vibrant as younger demographics in ad spending. They even went so far as to say "54-65 is the new 18-34."

Kudos to NBCU, but it's not like they just discovered the new world. There is nothing in their aha! moment, their marketing epiphany, that hasn't been said a hundred times, very clearly, by the likes of Ken Dychtwald, Mary Furlong, Chuck Nyren, Matt Thornhill, Dick Stroud, Brent Green and a dozen others. In some cases, major corporations and media networks hired and paid the above to tell them exactly that. And then they pretty much ignored what they learned.

Of course, I'm not implying that everyone over 50 has money or leads a vibrant, active lifestyle. Fifty-plus is not only the largest demographic; it's also the most diverse -- in every imaginable way. It contains poverty and wealth; obesity, morbidity and extreme vitality.

But here's the simple, obvious and undeniable equation. From the whole, subtract the group with poor health and finances. What's left is a very large and growing number of men and women who will continue to be the greatest consumers of all time for another 30 or 40 years. Mark my words -- in 30 years, it will be commonplace for 90-year-olds to spend large sums of money traveling, skiing, dining out and buying the latest and greatest gadgets. The money spent by 90-year-olds will determine the success of many businesses.

Change is coming in a way that will be too big to ignore. The proof is on the holiday wish lists of today's 50-plus consumers. Smart companies are not waiting to react. They have already positioned themselves by beginning to actively court the 50-plus consumer in a thoughtful and respectful way. The others will learn that disliking a brand lasts longer than liking one. 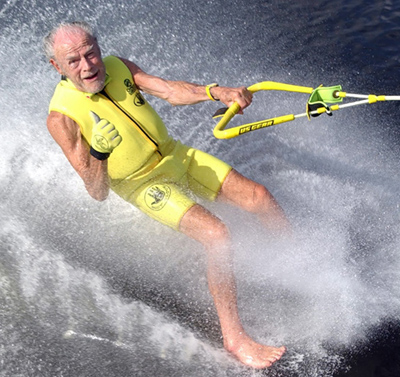