It's hard to believe now, but it wasn't that long ago in this country when, if you stood in a hospital hallway and looked through the glass window of the nursery, you could point to all the babies wrapped in pink and know exactly what they'd be doing in 20 years.

The babies swaddled in blue? Who knew? They had so many choices and adventures in front of them. Scientist? Salesman? Soldier? But for the girl babies, the choices were prescribed: wife, mother, maybe a teacher. And the expectations for girls were low. I still remember struggling with math when I was in grade school and being told by a nun, "Don't worry, you won't need it.''

You're reading this on the new Women's Page official launch day on Huffington Post, so it seems like a good time to take stock of how far women have come in this world. From my vantage point, I can't think of a more exciting time to be a woman: We've finally reached our era of great expectations.

Believe me, it's been a long road. In 1966, when I was convincing TV executives to produce my show That Girl, about a single girl living on her own and pursuing a career, they asked me "would anyone watch a show like that?" The men at the network were afraid America wasn't ready for a girl "living outside of a family unit." These were the days when most women felt they had two choices if they wanted higher education: you could become a teacher or a dental hygienist. (Yes, even me -- in case you're wondering, my degree is in education. But you should still floss.)

If you wanted money -- say, to start a business or buy a house -- you either had to do it through your husband, or you had to pick a state to live in where banks loaned to women. If you wanted a job, you'd look at the "Want Ads for Women."

Sex discrimination was perfectly legal. Women were paid less because they weren't men. End of story. (As we know, women still are getting just 77 cents to a man's dollar but at least we have a claim.) And phrases like "glass ceiling,'' "the mommy track'' and "paternity leave'' weren't even in our vocabulary.

Here are other phrases you didn't hear because they didn't exist: "sexual harassment,'' "reproductive freedom '' and "Rape Crisis Center''. 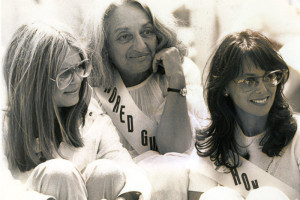 Sometimes, when I look back at the work women did -- women like Gloria Steinem, Shirley Chisholm, Betty Friedan -- I think of all of us as pioneers, hacking a trail through the wild. When I helped to start the Ms. Foundation for Women in 1973, we were doing something new: giving seed money to help women kick-start organizations to help other women. The funding came from Ms. Magazine and the royalties from Free to Be... You and Me. These days, with funding from multiple sources, the foundation gives out $4 million in annual grants. Think of all the trails that blazes!

Look at a nursery full of babies now and who knows what will happen to that infant girl? She could grow up to be an astronaut or doctor. Maybe she'll start a company and create jobs. Or maybe she'll be a lawyer and become a Supreme Court justice. When Sandra Day O'Connor became the first woman ever to sit on the Supreme Court in 1981, it changed the lives and expectations of women around the country. And she knew what a big job was ahead of her -- that if she failed, it would not just reflect on her, but on all women.

And 10 years later, when Ruth Bader Ginsburg joined the court, much was written about how they would get along -- not just because they were two women (the myth being that women did not know how to share power), but two women with opposing views. O'Connor answered the speculation with her signature straight talk, "It's important to be the first, but it's even more important not to be the last."

If there's one thing we trailblazers figured out, it's that you need to lift up many women, not just one woman. For women there's safety in numbers. If you have only one woman at the table, she's a pest. Two women? That's a team. But three? Now that's a coalition. Look at our Supreme Court: three women justices. Little girls are now growing up knowing they can sit on the highest court in the land, take a corner office at a company, or an Oval one in Washington. And they don't have to give up being a wife and mother if that's what they want as well.

I often think about my own mother, who gave up her singing career (and her radio show) when she married my dad. That was the expectation in her day. Later in life, she told her daughters that as much as she loved being a mom, she wished she hadn't walked away from her singing. It's always haunted me that my mother gave up her whole life to be a good wife and mother when, really, we could have gotten by with half.

So now, after all the marches and the consciousness-raising and the law changing, it's up to the next generation to protect the hard-won rights of women everywhere. These rights have to be defended and protected with vigilance, or they'll be chipped away. It's no different than our democracy. We must be ever-vigilant for both.

A lot of women cleared a lot of rough brush in those wilds to get us to a place of entitlement today. With hope in our hearts, we pass it on to the next generation with these words: Use it. Enjoy it. And grow it for the generation after you.

I was thrilled and inspired by the hundreds of wonderful responses to this post, but none more so than the email written to me by my friend Gloria Steinem who, in her wise and uniquely Gloria way wrote:

"Thank you for reminding us how very far we've come -- and inspiring us to keep going. As for who will take our places, I see thousands, maybe millions who are doing just that. But I think "passing the torch" was a guy thing. In our women's version, no one gives up her torch, we use it to light others. Think of Fannie Lou Hamer singing, "This Little Light of Mine." More torches mean more light!"

Thanks, Gloria -- I love not having to give up my torch!