There's always something that rudely awakens us to the reality of age. The blank stare of the 30-something at the office when I mentioned "fiddling while Rome burns." The moment I hesitated to use the words "pay phone" to describe a telecom job on my resume. Or simply that slightly panicky feeling I've felt when I've left home without even a tiny tube of concealer in my makeup bag.

But now the veracity of my age is starkly clear to me each day in black and white. With green trim. It comes in the Sharpie scrawl on my daily cup of Starbucks.

Wherever I go and give my name, Joan, to the cashier I almost always get back "Jone" hastily written on the side. That's J-O-N-E. Sometimes it's Joe, or JoAne, or Joni. Always the four letter, Mitchell version. (No flower to dot the i, like the one I added in junior high.) I've had Jen, Jodi, Juan and John. It happens at counters near home, in Penn Station, by my Brooklyn office, in airports and far away cities.

"Grande skim latte, I tell the earnest kid with dark, liner rimmed eyes whose bare black tank reveals one arm etched from elbow to wrist in permanent swirls of blue and red. "Name for the cup," she asks brightly. Somehow the sound and spelling of the name Joan, stated by me in clear voice, is apparently a challenge.

I started taking pictures of my name on that white cup each day, turning my disbelief into a kind of photographic essay. I have dozens of iPhone shots. Most are of Jone with a few rare Joans thrown in, set on the edge of the sugar n' cream station as signs of the time. Mine and theirs. I ordered cappuccinos for myself and a friend; Ireen and Jone is now my most prized photo in the series. 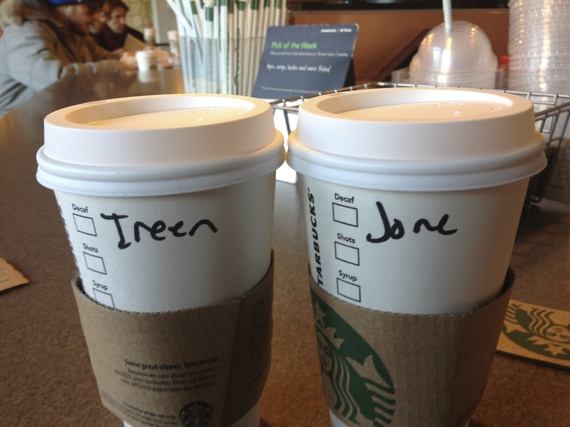 My mother, who always hated her name Estelle, chose my name for its au courant glamour. In the vein of a young Kiera, Dakota or Chelsea, her choice of Joan summoned up Blondell, Crawford, and best of all Fontaine, whom she adored as the meek wife of widower Laurence Olivier in the film Rebecca. Ironically, Fontaine played a character whose name is never cited in Du Maurier's novel, and in the movie version this omission meant she was, to me, forever, wonderfully, Joan.

I don't expect the pierced, tatted, and dreaded baristas to know a damn thing about driving up to Mandalay or fleeing Mommie Dearest. Still, I've rationalized it's not just an age thing, revealed against my will, frankly, when I order a latte, but perhaps a brewing national crisis in literacy, right here, in the proverbial teacup. Are all the English majors doing Media Studies instead?

And haven't these kids heard of Joan of Arc? I know they're too young for Joan Armatrading or Joan Jett. And I guess it's ambitious to think that Joan Baez is at least iconically somewhat famous as a '60s rebel. What about Joan on MadMen for Chrissakes? It's a retro use of our name, sure, but she puts the Joan into print, doesn't she? In Star, Us or Entertainment Weekly? Aren't the Beatles back and on iTunes? Who do they invite "out to the pictures" in Maxwell's Silver Hammer? Jo oh oh oan!

I realize you don't necessarily read lyrics when you don't have an actual album in hand, but they do show up on Shazzam if requested.

Someone told me that Tinkerbell is the most requested name at Starbucks. I have yet to check it out with the company's PR department, but have sharpened my ears at the counter hoping to detect a trend. There's the occasional Wendy or Peter. Is she Wendi? And maybe that's on purpose, like an Ashley, who's really Ashlee.

I look longingly at contemporaries who can say Sarah, or Jennifer or Liz; their names cross the generations. When I state that I am Joan, I'm practically a Lorraine, or Barbara or Debbie, sheepishly self-identifying as someone unlikely to know the music on the download of the day, even though I sometimes do, thank you very much.

Suddenly I see a freedom in given names where parents didn't give a damn about how to spell them. Cyndi, Jayson, Shameekqua, Kellee, Li-An. They probably don't care what comes back on the cup. Will they be forever names of the 1990s, or always rooted in the 2000s? Or do their creative spellings liberate them from the shackles of a time frame when displayed in the public square of the coffee counter?

Maybe I should just offer up my middle name that shows mom was far ahead of her time after all. For some reason it's Sydne, without a final-y. A renegade move for mom's generation. No one ever spells it correctly. At least not anyone my age. 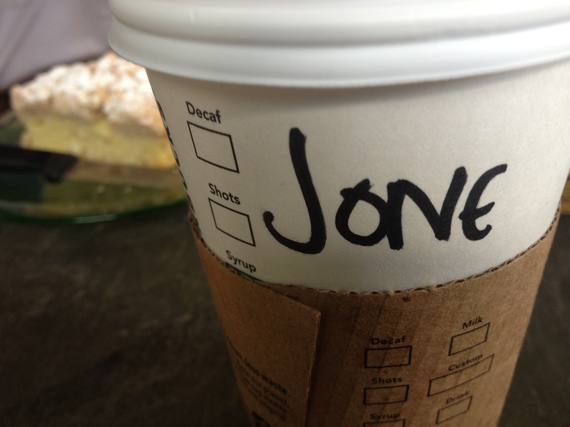