Everyone's talking about it. It's the topic of the moment. I'm doing it right now. Even President Obama's doing it.

It's learning to code. codeX is doing it in Africa. Our mission is to train 100,000 African developers (or more) in the next 10 years (or less).

Africa is home to 200 million young people, soon to be the largest working age population in the world. Less than a third will graduate from high school and only 12% will get any sort of tertiary education.

At the same time, Africa's billion people are getting online faster than you can say "hit me on Whatsapp." The number of Nigerians on Facebook doubles every quarter. Kenya has one of the highest tweeting populations in the world. Check out Chief Kariuki's Twitter stream!

So who is going to build Africa's digital economy? It has to be Africans, because they know what the rising consumer class wants and what problems need to be solved. They also know how to solve them, once they have the tools. And at the moment, far too few do. 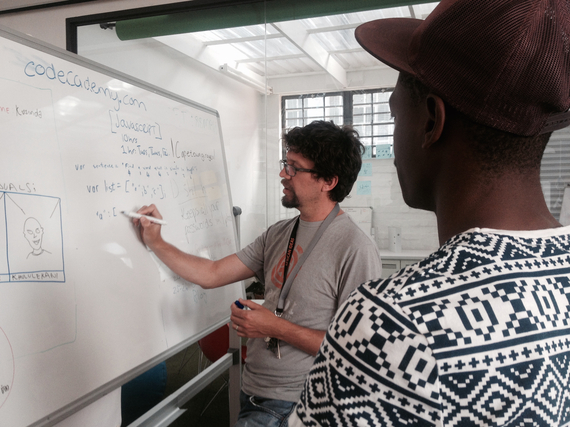 I'm writing this sitting in a computer lab in Kayamandi, a township of mainly informal shacks, outside of Stellenbosch. It's only a 10 minute drive from Spier Wine Farm, where I've spent the last 3 incredible days at the first WPP Stream Africa, talking with and learning from some of the world's most talented humans. Everyone there showed incredible support for codeX, and voted for us to win The Pitch, the last major event of the (very) un-conference.

Sixteen hours after I stood onstage talking about how codeX addresses the Pitch brief for a social enterprise that tackles youth unemployment and empowerment, I'm watching Lindani Pani, one of the coders from our codeX pilot, mentor a group of young would-be coders through the Javascript course on Codecademy. The course is in English, but he's advising them mainly in Xhosa, and they are flying through the modules. They don't want to leave when the elderly staffer comes to lock up. And when she finds out they are learning "how to control the computer," she asks me if she can come to the next session too.

Running Open Days is part of our recruitment strategy to find the best talent, no matter where they come from. We've partnered with libraries and non-profits in some of Cape Town's poorest areas to give computer access and mentors for free to people who want to learn coding basics, and we'll take the stars into codeX in 2015. (We also have a crowdfunding campaign to run a 2 week bootcamp in January specifically for girls, because they are much harder to recruit.) 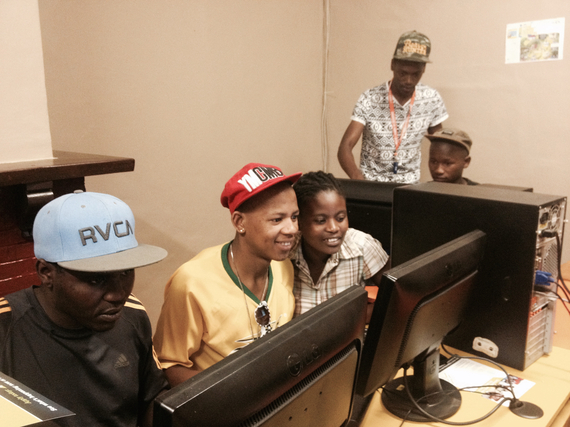 Lindani took a minibus taxi here from his home in Khayelitsha, another township nearby, where more than a million people live. Three months ago, Lindani was working as a salesman at a big box store, making $300 a month that he used to (just barely) feed his twin sons. He is one of the few who had a job at all. He had never seen a line of code, but he knew that computers could be controlled from taking a PC networking course at a local computer training center called Silulo Ulutho. And he wanted to learn how to do it.

In the last 12 weeks, Lindani has built a personal website, a blog, an app to manage money in group saving collectives known locally as stokvels, and an app to increase transparency and efficiency in minibus taxis--since he uses one every day. Working in teams, using agile methods, he's learned to code, but he's also learned to learn -- about user experience, about business models, and importantly, about his own learning experience itself. Today, he's already passing what he's learned onto another 6 young people from the surrounding shacks who showed up on a Saturday to learn to code.

In South Africa, a starting salary for a junior developer is about $1000 per month, and it goes up exponentially from there. So once Lindani finishes codeX, he's looking at about a 300% salary increase, just for starters.

And that's if he decides to go work for someone else at all. His real ambition is to start a company doing development work for other people, because he knows that while there are a whole lot of great ideas on the continent, there are not nearly enough people who can execute them. Yet.

But what if there were an oversupply of developers in Africa?

What problems could be solved once people are armed with the technological tools to solve them?

Perhaps an app for informal moneylenders, the main source of accessing capital for most Africans, to track lending and borrowing? Perhaps a logistics management tool for health care workers delivering AIDS medicines around informal settlements? Perhaps a website to reduce corruption in the construction industry?

Those are just a few of the prototypes our coders have already built. And that's 8 of them in the first 3-month pilot (which we had 800 applications for).

We need your support to do it. Please get in touch if you want to get involved.