It was in kindergarten when I first learned I was Asian. Sure, there had always been signs -- I was nearsighted, loved rice and caused an unfortunate tricycle accident at age three -- but I'd always just assumed it was typical of American families to speak two languages at home and get insulted by Pizza Hut employees.

It all changed when I arrived at KinderCare, a child's paradise of apple sauce, alphabet books and... other kids. While I had certainly seen other children before, I'd never seen so many in the same place, all looking somewhat different. One intrepid boy finally gathered the courage to welcome the new alien in their midst, coming up to me and saying, quite eloquently, "Ching chang ching chong choo." Ever the clever linguist, I responded by smacking him on the head with a Tonka truck. I had to sit in timeout for the rest of the day.

Despite my crude introduction to ethnicity, I never thought much about being Chinese -- mostly because there weren't any other Chinese people around. According to the 1990 U.S. Census, the small town in Massachusetts where I lived was 98.98 percent Caucasian. The 0.27 percent of the population that was Asian was pretty much statistically insignificant, like the little bit of bacteria that doesn't get killed off by hand sanitizer. Not that I'm equating Asians to bacteria. It's a bad analogy.

Growing up, there was only one other Asian girl in my elementary school, Lisa. The fact that we had rhyming names made it a lot easier to mix us up, even though she was Vietnamese and stood a foot taller than me. We quickly became best friends, bonding over a shared love of stickers and Fun Dip (at that age, I suppose it's pretty easy to make friends with anyone). But when Lisa's family moved to California in seventh grade, I cried for days. My mother managed to find the silver lining -- now that I was the only Asian left in the entire school, she didn't have to introduce herself at parent-teacher conferences anymore. Everyone knew she was Teresa's mom.

Even though our family was considered "exotic," the cultural learning went both ways. When I was twelve, I accompanied a friend to mass. I had never been inside a church before, so I had no idea what to expect. "Don't worry," my friend whispered. "Just do everything I do." So I bowed, I prayed, and I followed her up to the altar where I proceeded to grab the cookie out of the priest's hand. It was not very good. Only later did I find out that I'd spit out the body of Christ in front of the entire congregation. That was the first and only time I've taken Communion. 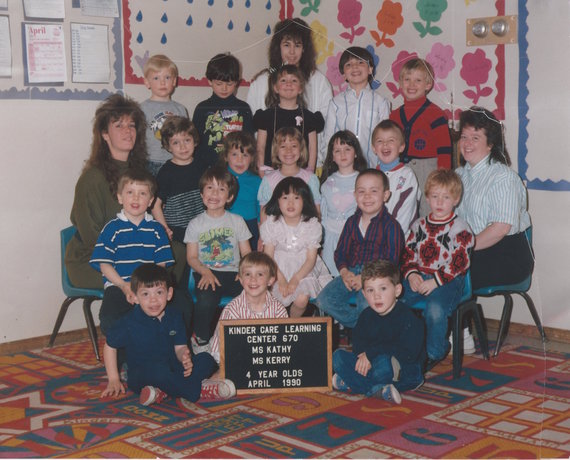 WHERE ARE YOU REALLY FROM?

I don't know how many times I've been asked, "Where are you from?" followed by, "No, where are you really from?" I usually say I'm from Boston, but I'm really from Indiana, where I was born. In our small town, my family would often get such questions from very polite, very curious strangers. "So, Taiwan. That's where they make stuff, right?" "Do you people celebrate Christmas?" "How much do you hate China?" "Hey, why don't the kids have accents?" The amateur anthropologists would often end the conversation by breathlessly exclaiming, "You're so well assimilated!" as if they had expected us to start karate-chopping fish heads at any moment.

There were always certain expectations that came with being Asian. We are good at math. We are socially awkward. We know kung fu. We are terrible drivers. Of course, all these stereotypes are interrelated -- we are good at math mostly because our Tiger Mothers read calculus textbooks to us instead of Goodnight Moon. This, in turn, ensures that we are poorly socialized and ostracized by our classmates, so we do kung fu to cope with our loneliness. After honing our kung fu skills to master gravity, flying from rooftop to rooftop, we recognize the banality of on-the-ground transportation. Thus, we never properly learn how to drive.

Obviously, these are the relatively harmless stereotypes. The uglier stereotypes of Asians -- that we are cheap, bigoted and cold-hearted -- are not necessarily true either. For instance, a few years ago, our family took a trip to Taiwan to visit my grandparents. In Taiwan, the first thing we did was go to Costco, to buy a gift for a family friend's engagement party... which is being cost-effective, not cheap.

When we arrived at the hotel for the engagement party, we were greeted by a beautiful ice sculpture based on the Robert Indiana design, at which my father squinted, confused and asked, "What does L-O-V-E mean?" ...which means nothing, because every foreigner wants to know what love is. (Wait for applause on Foreigner joke, get nothing, cry self to sleep).

SEARCHING FOR ASIANS AT THE END OF THE WORLD (OR, OMAHA).

Last year, I spent the afternoon at a rooftop bar in downtown Omaha, looking for Asians. I was with two of my best friends, both blonde-haired, blue-eyed Midwesterners who could find their likenesses in an American Girl doll. Looking for Asians in Omaha had become a ritual of sorts, borne by a few cocktails and the observation that I might be the only one around. From our vantage point on the roof, we spotted many common species native to Nebraska: the Ample-Breasted Chickadee, the Red-Faced Bar Creeper and the Couple Wearing Matching Denim Overalls. But no Asians. Maybe we should have expected this after a friendly Nebraskan asked me what it was like to be "an Oriental."

It turned out to be a white lady with straight, jet-black hair.

Last week, I spent the afternoon walking around the campus of UCLA, looking for non-Asians. Everywhere I went, I ran into someone who looked like me, often traveling in packs. It got me thinking: America is supposed to be a melting pot, but maybe we're not so much melting together as we are melting apart (ooh, that could be a rap lyric. Hit me up, Drake).

To take it even further, if America were a soup -- let's say, minestrone -- it seems all the carrots are on one side, all the beans are on the other and the pasta's just hiding out in the corner, hoping not to be overtaken by carrots and beans. But the great thing about minestrone soup is the variety -- can you imagine a soup with only carrots? That would be terrible.

What I'm trying to say with this pretentious soup metaphor* is -- If you've never met an Asian, find one: We're fun! If you're Asian and only hang out with other Asians, keep in mind that non-Asians like bubble tea too. All hail diversity, carrots are disgusting, everyone Wang Chung tonight. End thesis.

* -- I'm not entirely certain that was a metaphor.

So, what is it like to be an Oriental? Well, ma'am, there are its advantages. Given that many Asians can speak different languages, we can openly insult you to your face -- anytime someone switches seamlessly from English to a language you can't understand, just know that they're calling you a jackass. Since many Americans can't tell Asians apart, we can sneak into bars with other Asians' IDs -- and if we're ever caught, we can claim innocence based on "no speak English."

Asian kids rarely get kidnapped (why steal one when you can easily buy one overseas?), and we don't have to worry much about identity theft; unless another Asian has jacked our credit cards, the cashier would probably find something suspicious: "But you don't look like someone who'd have three consecutive vowels in your last name..." Thus, being Asian affords me peace of mind.

The only downside to being Asian is that if you're female, you have to deal with the fetishists. And if you're male, well, you're probably short. Sorry. It also gets tiring to keep up the peace signs/bunny ears for every picture we take (and we take a LOT of pictures).

In spite of minor annoyances, Asians in America have come a long way. When I was a kid, every time we saw other Asian people in town -- part of the 0.27 percent that wasn't us -- we would always give the customary "Hey, you're Asian too" head nod. We felt a kindred spirit to those who had made it here, all the way to the other side of the world, enlightening the people of southeastern Massachusetts to our presence.

But it seems different now. Asians are on the rise. We have a sitcom. We have a senator (yeah, just one, and she's from Hawaii, but still... we have a senator!). We have one-quarter of Tiger Woods. The small town where I grew up has ballooned to 1.8 percent Asian in two decades, and we haven't peaked yet. So watch out for us, because we're taking over. After all, with our squinty eyes, straight hair and aversion to sunlight, we're pretty similar to vampires... and vampires are really "in" now.