College classes taught over the Internet have boomed over the last decade as millions of students have taken -- or at least registered for -- Massive Open Online Courses (MOOCs).

To help understand the growth of online education and changing attitudes toward it, we have some handy infographics based on survey responses from 2,800 Chief Academic Officers and academic leaders, released earlier this year by Babson Survey Research Group.

As Babson's research shows, total enrollment in online courses has consistently increased since 2002. Growth did decline over the past two years, but the proportion of students taking at least one class online continued to rise to 32.1 percent in 2011. 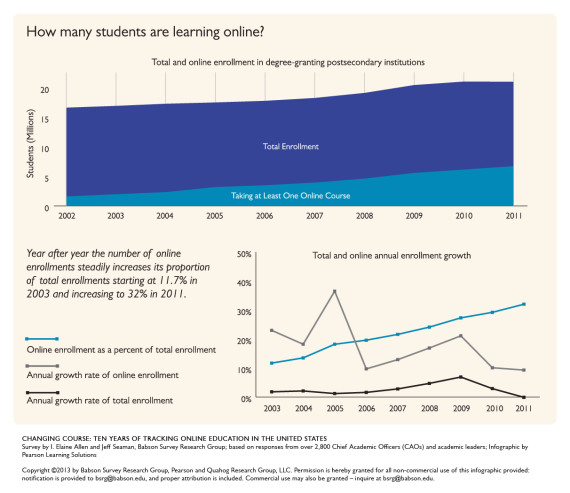 Despite the popularity of MOOCs, academics have been slow to declare online courses equivalent in value to those taught in person; faculty are far less likely than administrators to express excitement about online courses, Inside Higher Ed notes. Although professors are warming up to them, according to Babson's survey, academic leaders still largely don't believe online education can surpass the quality of in-person teaching. The San Bernadino Sun reports even the professors who teach MOOCs say the classes shouldn't be worth college credit at this point. 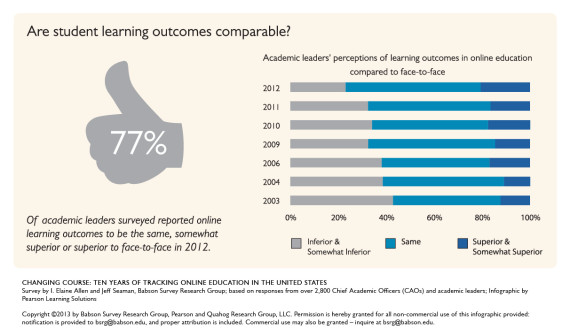 One of the biggest barriers to broader acceptance of MOOCs cited in the survey were the low retention rates for such courses. For example, one class offered by the Massachusetts Institute of Technology in 2012 saw only 5 percent of students complete the course, out of 140,000 who signed up to take it. Another course taught by a University of California-Berkeley professor saw just 3,500 finish out of 50,000 who registered. 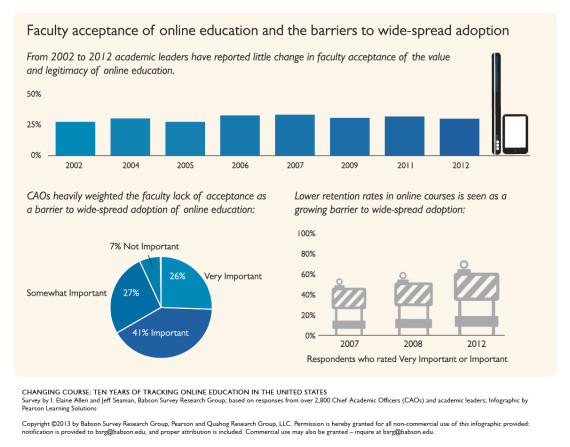