Sick of bars, sick of networking, sick of walking down the street looking at thousands of faces but waving to none?

Grubwithus, a site that sets up group meals composed of strangers trying to meet new friends, might be able to help you out with that.

What it is: Grubwithus lets you sign up for a meal with a group of strangers, so that you can meet new friends in a relaxed setting without the pressures of a networking event, or the hassle of a bar.

Co-founders Eddy Lu and Daishin Sugano thought of the idea after relocating to Chicago and having trouble meeting new friends.

"We tried going to bars and clubs to meet people. We just wanted to meet people," said Lu. "It's awkard to ask a guy at a bar, 'Hey you want to hang out sometime? We tried to find these places where people just want to meet friends, so we said, 'You know what, lets build it ourselves.'"

They decided that the best way to meet and get to know strangers would be through meals.

"The place we met the most friends were parties where you get together over food," said Lu. "You're sitting there with someone for two hours and it's better than a bar because you can't just walk away. Here, I'm eating dinner, having fun, I might as well talk to the person next to me."

How it works: On the site, users can choose from a rolling schedule of meals offered on different dates, for different prices, at different restaurants. The site will show how many seats are left, as well as the menu planned for the evening. To join a meal, you simply click "Reserve Now" and check out with your credit card information.

From the advice of experts, Grubwithus forms an initial list of restaurants to hold the dinners at. Currently, the site sets the times, dates and places of each meal, though the site is privately testing a feature that would let users set up their own meals.

"Right now its mostly driven by us, where we set the date, the time and all that, but more and more users have started to request and do their own meals on the site," said Lu. "We're seeing its going to get more and more user driven. We're building out a platform to let anyone have a meal, with a theme if they want to."

Users pay for the meals ahead of time, so as to skip the awkward bill-splitting that usually accompanies a group meal. The price of a dinner can range from $15 to $60 dollars a person, and might include anywhere from five to 24 people (though Lu says it's usually somewhere between six and ten).

The first person to book a meal will pay the least of anyone going to the meal, and the price jumps 50 cents with each person who signs up. That first person is being rewarded for being adventuresome, since the last person to sign up can see everyone else who's planning to attend.

Afterwards, users fill out a form where they can list new facts they've learned about the people they've met. Those facts help build each person's profile.

"Most people dont like writing a whole bunch about themselves, but you'll write an interesting fact that you learned about another person," said Lu. "They would never put it on their own profile, so it's a self building profile."

Though users can't communicate before their first meal together, afterwards, they can message each other individually, or as a group.

Why you'd use it: Much as people who moan about having love trouble can now turn to online dating sites, Grubwithus provides a way for those who just want to meet new people, to meet new people. Unlike networking events, fraught with professional pressure and thick with the thwap of business cards passing hands, Grubwithus meals are just about meeting people who might want friends, rather than connections.

And while bars are certainly a natural venue to chat up some unknowns, being forced to sit for a set period of time with a set group of people means that users will almost definitely get to know people they might otherwise have passed by. Lu said that people have gotten jobs, met significant others, and even found new buddies to play online games with.

"What's happening is that people have actually made friends," said Lu. "We're supper happy it actually worked. And it worked for us too."

How to get it: Grubwithus is currently available in New York, Chicago, San Francisco, DC, and Los Angeles, and will soon be rolling out in Boston and Seattle. To get started, just visit their website. 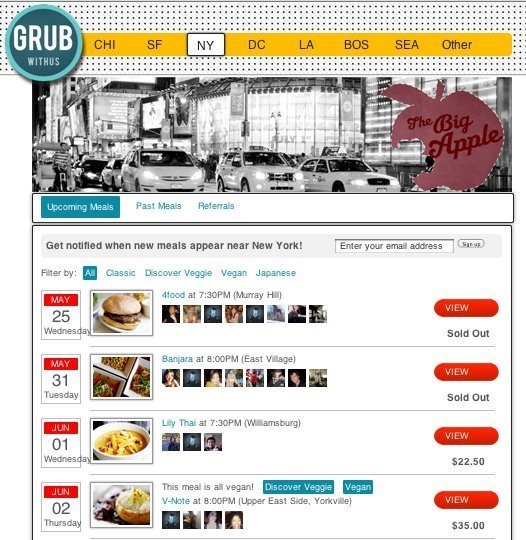 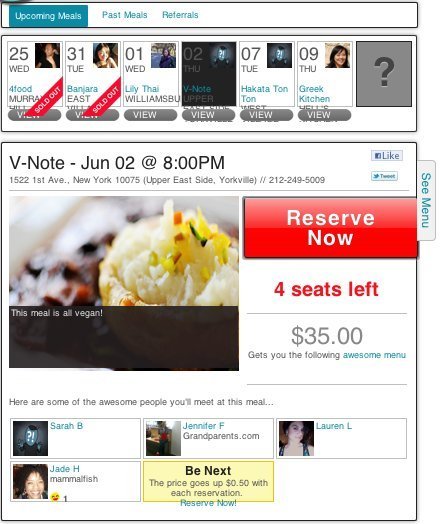 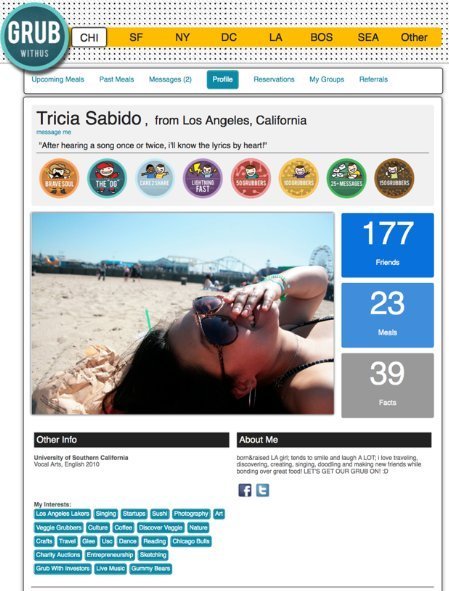 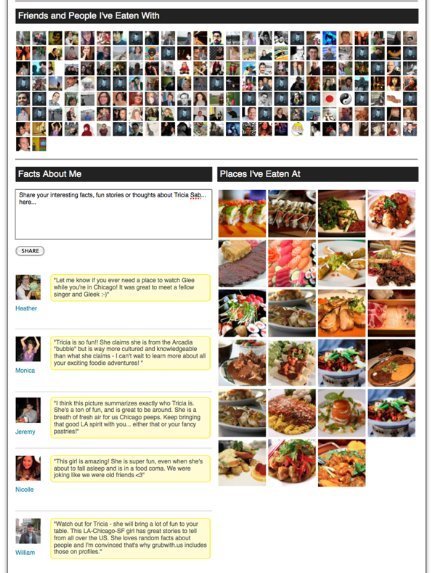 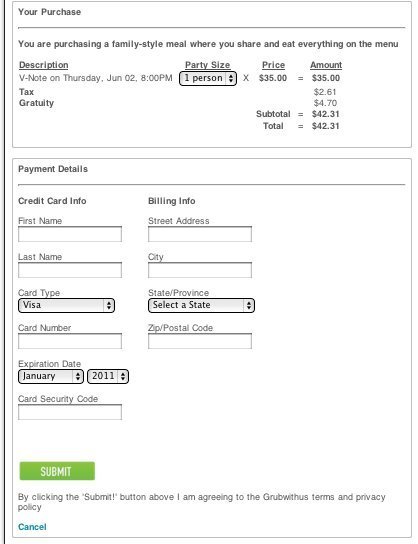