“We are unimaginably heartbroken to announce the loss of our beloved Grumpy Cat,” wrote Tabatha, Bryan and Chrystal Bundesen in a statement.

Some days are grumpier than others... pic.twitter.com/ws209VWl97

The mixed-breed “encountered complications from a recent urinary tract infection that unfortunately became too tough for her to overcome,” the statement read.

“She passed away peacefully,” it added, “at home in the arms of her mommy, Tabatha.”

The family from Morristown, Arizona, noted how Grumpy Cat, whose real name is Tardar Sauce, had “helped millions of people smile all around the world — even when times were tough.”

It vowed that “her spirit will continue to live on through her fans everywhere.”

Tributes poured in on Twitter, where fans said they were “heartbroken” by the news.

Heartbroken 😥😥😥 Sending my love to Tabatha and all your family. That came as quite the shock 🖤🌈

RIP grumpy cat. I was lucky to meet you in London. pic.twitter.com/T3wZCM1UZS

R.I.P. You were a special kitty cat & the world was a little brighter w/you in it. I'm so sorry, Grumpy's family, for your loss. ❤️

Grumpy Cat became an online star as a kitten after this photograph that Bryan Bundesen shared online of her looking very grumpy indeed went viral.

Happy birthday @ConanOBrien! @RealGrumpyCat, you can at least pretend to be happy. #Grumps #TalkToThePaw pic.twitter.com/gI2iL75Dg2

Model and designer Georgia May Jagger:

She appeared in Broadway musical “Cats,” and inspired and starred in the 2014 Lifetime movie “Grumpy Cat’s Worst Christmas Ever.”

She had an animatronic figure made in her honor by the Madame Tussauds waxworks museum:

And CNN called her “the unlikely star” of the 2013 South by Southwest festival.

Remember Grumpy Cat with some of her most-liked images below: 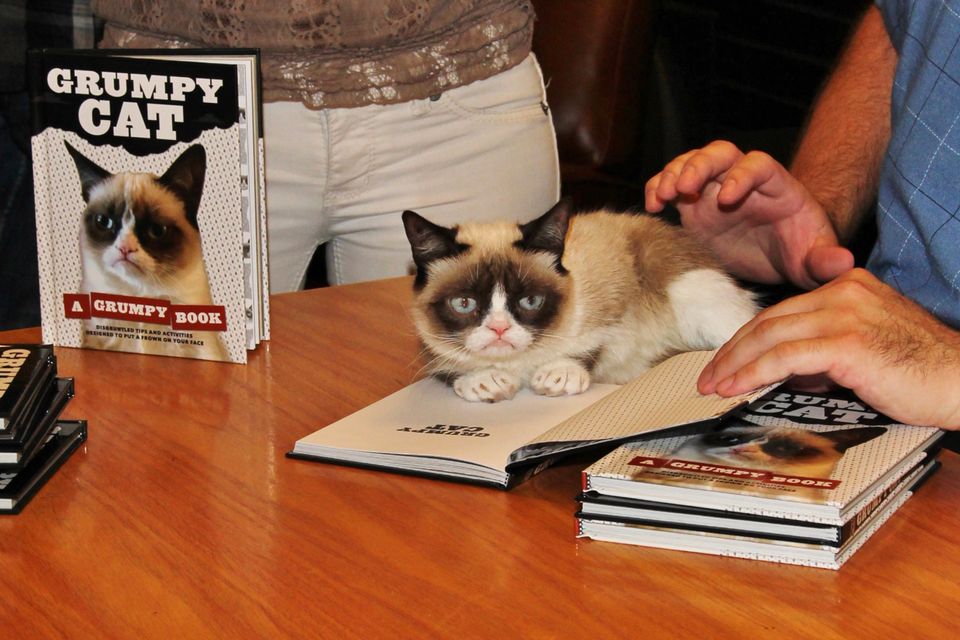 1 / 7
Grumpy Cat does not look impressed at her book signing in Los Angeles. (Credit: AKM-GSI)