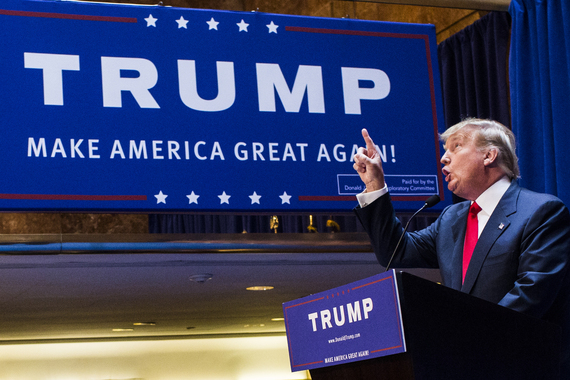 On a phone interview with CNN on July 28th, Donald Trump expressed his criticism of establishment elite:

"This is more than me; this is a movement going on. People are tired of these incompetent politicians in Washington that can't get anything done," said Trump. "They can't make deals; they can't do anything. They go and they - all they care about is getting elected."

It's not a stretch to say the landscape of American politics has changed, with a direct correlation to the current state of affairs in America. In a post-industrial capitalist society, Americans of all creed and color are experiencing an overall decline in quality of life.

On opposite ends of the political spectrum, both Sen. Bernie Sanders and Donald Trump promise change. While their vision of change differs in the most extreme way possible, the part of the American psyche they appeal to is exactly the same.

To understand this, we have to add context.

The middle class is losing more of its wealth as the upper class, fueled by capital gains, continues to swallow up more influence and wealth, further dividing the classes from one another.

The rift amongst occupation and income in America, even amongst those who obtain a college degree, is widening at an alarming rate.

The higher education system has become more economically polarized. Although the higher-education system encourages upward mobility and economic opportunity, the ability to capitalize on those opportunities are fairly slim for individuals from lower-income backgrounds.

Additionally, views on race relations, state violence and discrimination are more divisive, as seen in a CBS/New York Times poll.

The American Dream of equal opportunity, independence, and upward mobility seems a distant memory. As a result, many Americans are beginning to place the blame on ineffective political structures and turn to new ideology in hopes to help fix the system that often works against them.

At the same time, Trump mania is sweeping across the nation and stirring the pot of the once relatively stagnant U.S. political scene. Given Donald Trump's financial independence, immense name recognition, perceived authenticity, and successful business acumen, he has amassed a large constituency and constructed a highly effective upheaval of conventional political campaigning.

Then there's Bernie Sanders, whose "democratic socialist" positioning -- along with his short disheveled hair, hunched shoulders and agitating style -- naturally renders him a political outcast in Washington. 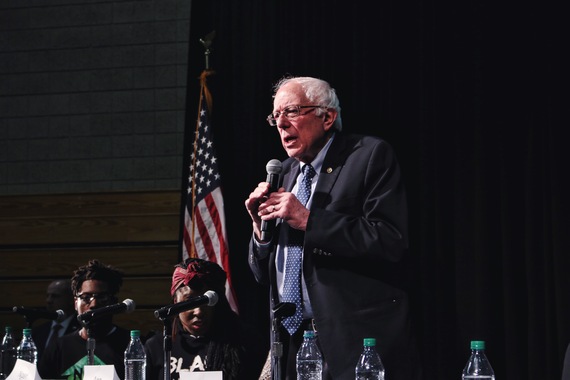 This raises a couple of concerned eyebrows and two very important questions: Why do Trump and Sanders resonate with voters? What does their presence in the American political scene expose about the current state of American society at-large?

Over the past few decades a series of profound changes have taken place. Increased socioeconomic disparities and changing demographics fueled by increased racial and ethnic diversity has led to a massive cultural and societal divide. As a result, an increase in starkly differing opinions on American socio-political issues and voter polarity have followed suit.

According to a Washington Post article in 2014, Democratic and Republican voters today are far more divided by race religious beliefs, ideological orientations and policy preferences than in the past. These trends manifest themselves in various ways, leading to increased gridlock in Washington and in the everyday life of many Americans. 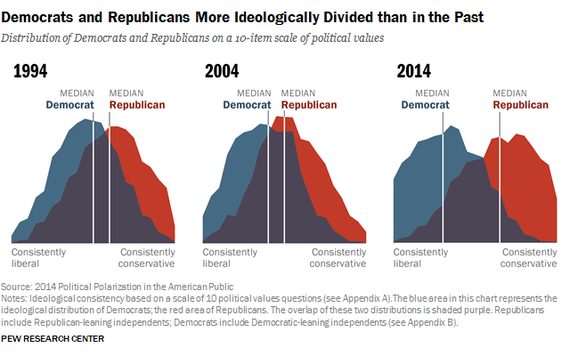 The graphic below shows the extent to which members of both parties have become more ideologically consistent, and therefore, trend further away from one another. As a result, today 92% of Republicans are to the rights of the median Democrat, and 94% of Democrats are to the left of the median Republican. 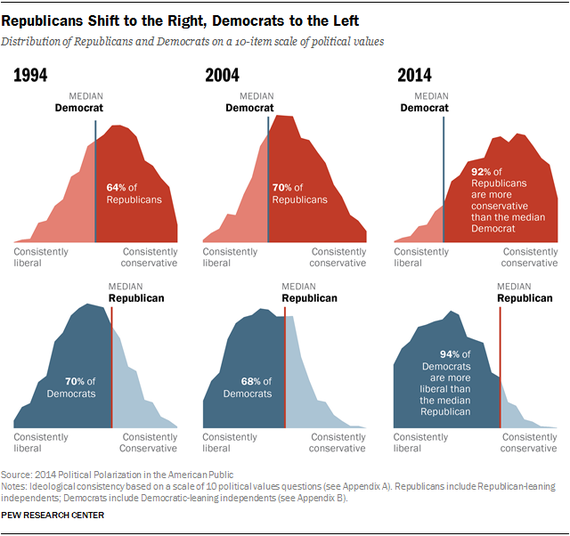 Partisan animosity has also increased substantially over the same period. In both parties, the proportions of those who share a highly negative view of the opposing party has more than doubled since 1994. Most of these intense partisans believe the opposing party's policies "are so misguided that they threaten the nation's well-being." As seen in the figure below. 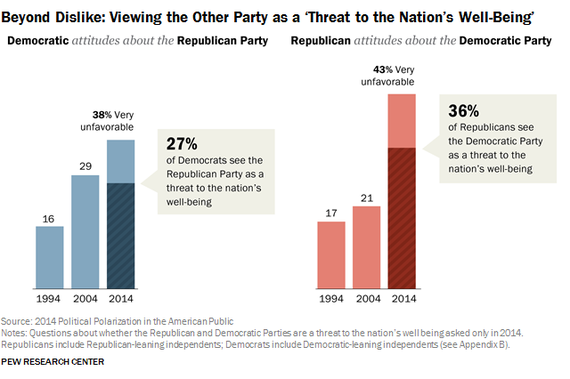 What is the cause of this massive cultural shift? People are angry. In recent times, this populist anger initiated by the 2008 economic recession lit a fire under American liberals and conservatives, alike. Propelling the Tea Party in 2010 and Occupy Wall Street in 2011.

Over the years, excessive partisanship and massive ideological divisions have led to a disconnect between the voter base and party elite. The void is immense. As a result, this left many voters across party lines feeling as though their voice isn't being heard. This chaotic state, particularly within the GOP, serves as the perfect breeding ground for radical ideology. In response to the turbulence within American society --the fear-mongering, xenophobic machine that is Donald Trump-- has cunningly played well to the base, and positioned himself as the voice of the people.

Bernie Sanders was also known as a forthright antagonist while he served in the House. In 1990, Sanders called Congress "impotent", and scorned the two major parties as inseparable instruments of the rich. In 2003, he grilled former Federal Reserve Chairman Alan Greenspan, for being "out of touch" with the needs of the middle class and working families.

Other interesting parallels between both candidates can be seen in their rise into prominence. At first, both were seen as underdogs, with willingness to sacrifice ideological purity to 'tell it how it is.' Neither campaign has received donations from Super PACs or special interest groups. And both have an ability to bring new voters into the political process, mostly through support from a new wave of Americans who resent the current economic climate.

Oddly enough, the majority of their constituents are also fairly similar in many ways.

According to a recent Gallup poll, most Democrats and Republicans voters agree on the top four issues in the campaign: the economy, national security, jobs, and healthcare. Where they differ lies in Republicans placing more priority in the federal budget deficit, foreign affairs, the size and efficiency of the federal government, immigration, and taxes, as opposed to Democrats placing more urgency on issues relating to the income/wealth distribution, the environment, and education.

Where Donald Trump and Bernie Sanders are most effective lies in their uncanny ability to speak on behalf of the widespread outrage and frustrations felt by Americans, while simultaneously constituting an element of antiestablishment appeal. All of which serve to aid in their highly effective upheaval of conventional political campaigning. Both seemingly serve to expose fallacies, contradictions, and hypocrisy within American politics, as citizens are beginning to correlate the near-universal decrease in quality of life in America to the ineffective policies leaders enact.

This is true in almost every state where pollsters are speaking to Republican constituents. Trump leads with 38 percent support in New Jersey, 34 percent in South Carolina, 42 percent in Florida, 30 percent in heavily-polled New Hampshire, 31 percent in Ohio, 22 percent in Pennsylvania, 36 percent in Texas, and 25 percent in California.

And while the vast majority of Donald Trump's supporters reside within the GOP camp, even those who traditionally vote Democratic find themselves able to slightly agree to a portion of his strikingly skewed views.

Sanders also appeals to an antiestablishment strain that isn't particularly Liberal. Some Republicans believe that Sanders embodies conservative values. In Vermont, Republicans on the Burlington City Council sided with Sanders on Fiscal issues. His promise to redistribute power from Wall Street to mainstream America is a message that resonates with most Republicans. According to a New York Times/CBS poll conducted in May, 51% percent of Republicans think large corporations have too much influence on American life and politics today. In addition, back in his home state of Vermont many of the low-income parts are Republican, largely populated by Libertarians who generally share a skepticism of government intrusion into individual judgement.

In an article featured in The Atlantic, Author Clare Foran interviews Political Science Professor Chris Ellis, who offers an interesting take on partisanship:

"Once you get out of Washington 'conservative' can mean all sorts of different things. Voters are often left of center on some issues and right of center on others. So someone like Trump or Sanders who talks about themselves in a way that doesn't fit into a pre-ordained box could be appealing to a lot of people," says Chris Ellis, a political science professor at Bucknell University. (Foran, The Atlantic)

So, is there still hope for the future? Will Donald Trump 'Make America Great Again?' or will Bernie Sanders bring us "A Future to Believe in?' Despite all the hoopla surrounding both candidates, I'm still malcontent. Do either represent a true socio-political paradigm shift? or do they only serve to speak on frustrations? In my opinion, neither candidate is a true depiction of the radical disruption and renovation of the political process that many Americans eagerly seek. Old, angry, white men fighting for control of the country is akin to the traditional American power dynamic.

In an interview with NPR News on December 21st, President Barack Obama posed a question for his successor:

"I might just ask somebody, 'Why do you want to do this?' "he said. "And I suppose they would give a cliché answer because that's what candidates do, but I will tell you as president, if you are interested just because you like the title or you like the trappings or you like the power or the fame or the celebrity, that side of it wears off pretty quick. At least it has for me."