[This originally appeared in Quail Bell Magazine, a place for real and unreal stories from around the world.]

Author's Note: "Guadalajara in 35mm" was on display at the Virginia Center of Latin American Art in January 2013 and also is on permanent display at Virginia Commonwealth University, University of Guadalajara, and Villas Miravalle.

Give someone a camera and they'll give you memories--tangible ones that you can develop and print and keep for as long as the paper keeps. The children of Villas Miravalle, a shelter for sexually abused minors in Guadalajara, Mexico, gave us a set of memories. Meanwhile, we hope that we gave them a sense of empowerment. Clicking a camera takes strength. It means intentionally acknowledging a certain visible truth for posterity.

We were a dozen Virginia Commonwealth University students, half of us studying Spanish interpretation and half studying public health for a couple of weeks during the summer of 2012. At the last minute before our planned visit to Villas Miravalle, I thought to bring the children disposable cameras to play with. So a couple of my classmates and I scrambled to find the cameras at drug stores and supermarkets. We eventually scrounged up ten of them.

If only we had had three or four times as many cameras. Though shy at first, more and more children emerged from their rooms to join our group in the courtyard. We started out with exactly eight little girls. At some point, I lost count of how many children were clamoring for cameras, so I asked the children to take a picture and pass the camera to someone who had not yet had a turn.

We ended up having less time than any of us had expected. When dark clouds eeked out warm rain, we collected the cameras in a frenzy. With monsoon season in full swing, flash floods were not just a hypothetical occurrence. Some of the children pouted and whined about our sudden flight, while others rushed toward us with hugs. Though only little more than an hour had passed, it was time for us to leave.

The children would stay behind--but we had proof that the encounter had happened. Almost 270 photographs worth of proof, I later discovered at a pharmacy in Richmond, Virginia. The children had used up every picture on every camera and most of the images were fully-formed. There were thumbs and blurs, sure, yet there was also thought and feeling in each picture. These are the ten photos I chose from those 270. 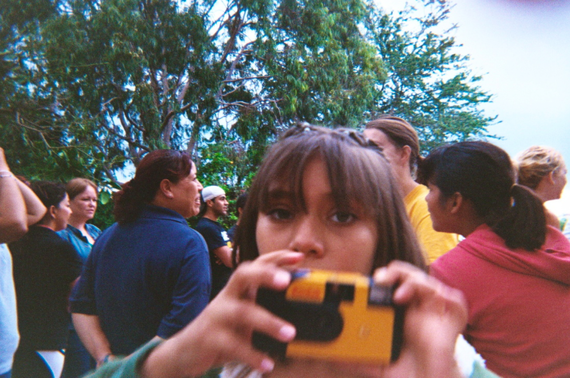 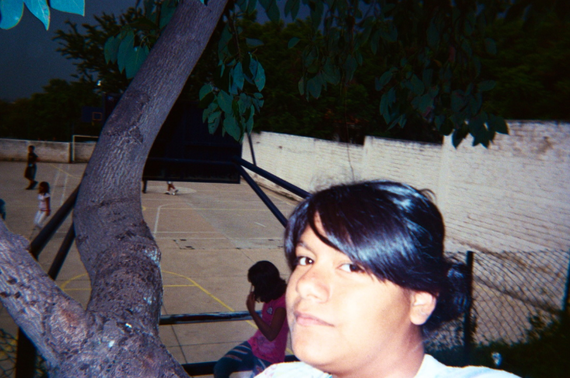 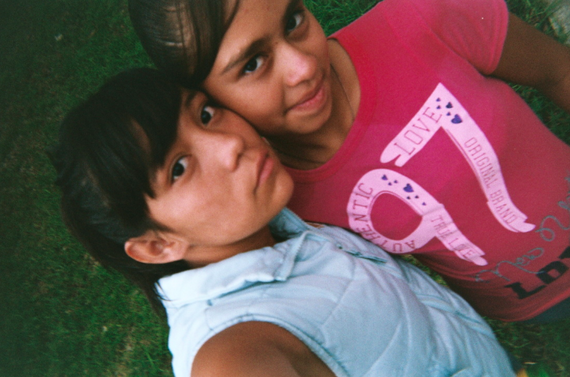 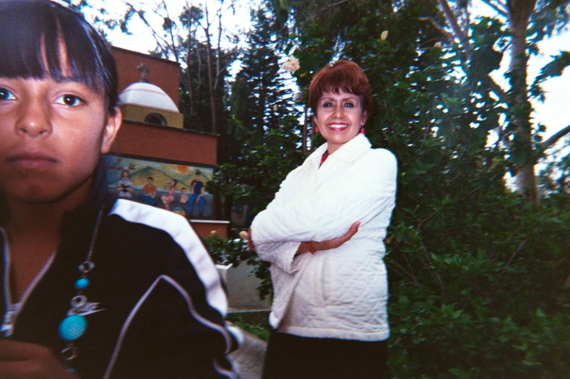 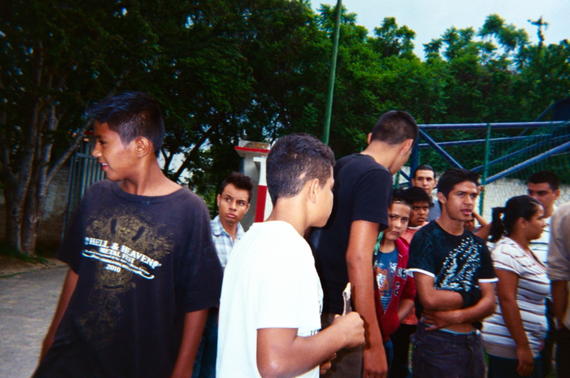 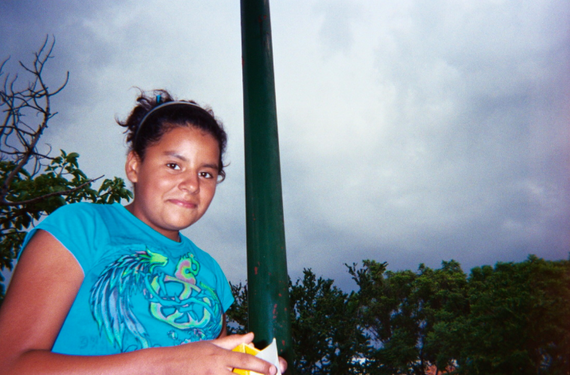 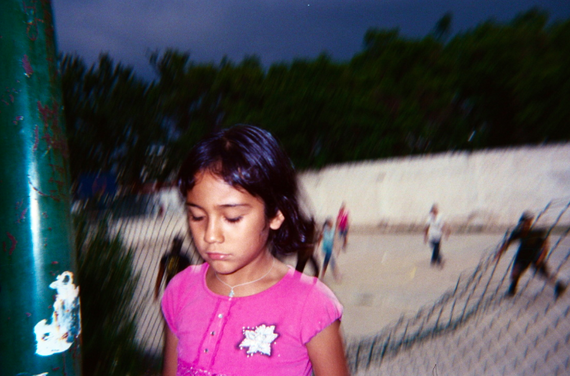 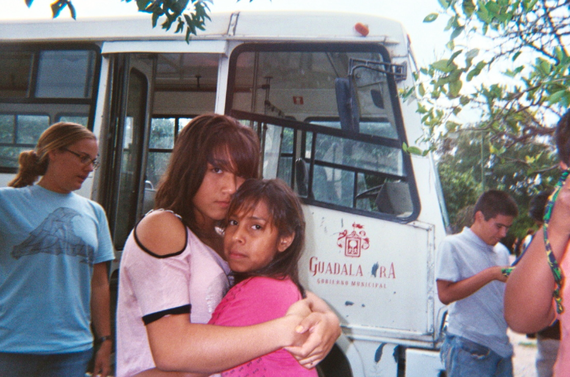 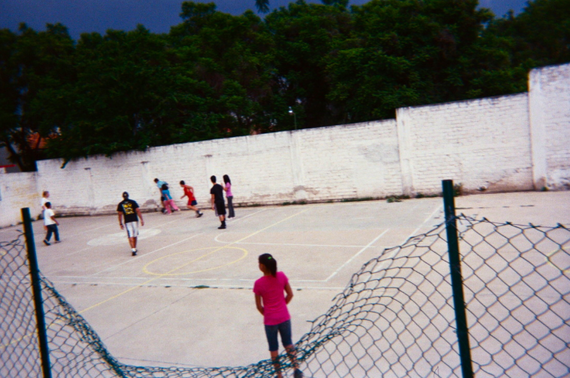 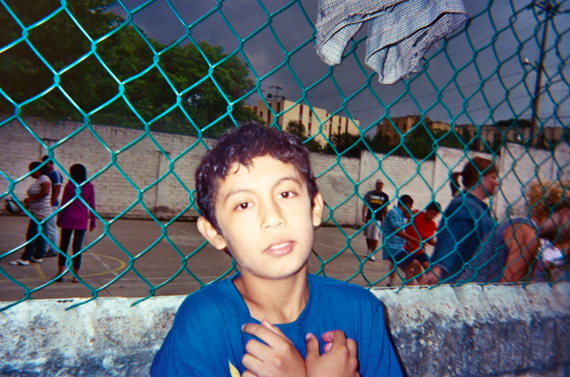 "As I walked through the gates to visit the children of Villas Miravalle, I felt a patchwork of emotion. I was excited to see the kids again, but I felt a sense of abandonment, as I had returned to the United States to complete my professional degrees leaving behind the kids who I have always considered family. I think my heart froze when I saw one of the little girls again. Her 3-year-old face will always be embedded in my memory. Now she is 7, and quickly growing up.

A group of boys yelled out to me as they always had, as I would arrive to the Villas. "¡Maestra! ¡Maestra!" When I saw them, I barely recognized them as the skinny 13-year-old kids I had taught to garden and brought out on excursions around Guadalajara. They were adults now, but once our eyes connected I immediately remembered our trips to the wax museum and the guards chasing us out of the department store while riding the escalator for the first time. I will be forever grateful that they let me into their hearts and shared with me the stories of the lives they had before arriving to Villas Miravalle. These kids have experienced horrors that no human should ever have to face. These are the kids that changed my life and have molded me into who I am today."

-Lynn VanderWielen, the VCU PhD student who coordinated the visit to Villas Miravalle. She taught English at the shelter after completing her undergraduate studies at the University of Wisconsin.

"I remember arriving at the shelter not exactly sure what to expect. Many children and adolescents gathered around and started hugging and holding hands with our students, seeking approval, comfort and love. Our students just hugged back, began playing games with the boys, teaching girls how to take photographs, started a basketball game. Others toured the garden and saw the pool where children had to share towels because there weren't enough for all. We wanted to stay longer but the sky got black and a bad storm which would leave us stranded was imminent. The children didn't want us to leave and I believe we all left frustrated that we could not stay longer, felt we had done so little for them, yet had made them feel happy for a little while. The compassion of our own students was an eye opener for me."

"Today we went to a shelter for children who have been victims of sexual violence, either through families, communities or through prostitution. I had imagined a small dark place that was dilapidated and miserable. What we found was a big green campus with a simple pool, jungle gym, basketball court, fantastic staff, and children who are on their way to healing. This isn't to say that all is well. In fact, the director gave us a laundry list of things they need badly and challenges they have in the face of so much trauma and poverty. Nevertheless, it didn't take long for us to feel welcome and start interacting with the kids who were happy to see us. In fact, we had to leave quickly because of the storm that would possibly flood us out. Our students were very hesitant to leave. I hope that as a group, we can find some way to continue our support for this magical place. We owe Lynn VanderWielen a big thanks for sharing her special space with us!"

Support the cause! Make the exhibit part of your home forever by ordering the accompanying booklet. The booklet is beautifully printed in full-color on high-quality cardstock. Enjoy the children's photographs and participants' words in a larger format spread across 16 memorable pages. 10% of your purchase of the "Guadalajara in 16mm" booklet will benefit the Virginia Center for Latin American Art. Order the book.