WASHINGTON -- Under dreary, rainy skies, thousands of protesters gathered in the nation's capital on Wednesday to mark the 10th anniversary of the first arrival of terrorism detainees at the U.S. naval base at Guantanamo Bay, Cuba.

The protest, organized by Amnesty International, the Center for Constitutional Rights, National Religious Campaign Against Torture and Witness Against Torture, started at Lafayette Park across from the White House and ended on Capitol Hill at the U.S. Supreme Court.

Protesters were lead by 171 people dressed in orange jumpsuits and black hoods, representing the remaining detainees at Guantanamo.

Outside the White House, demonstrators in military fatigues re-enacted the alleged poor treatment suffered by some Guantanamo inmates. Others wore on their backs photographs of detainees who died at the facility.

"We are here with our rage and energy, even with our hope, to ask Obama and the Supreme Court to close Guantanamo," [protest leader Frida] Berrigan said.

President Barack Obama failed two years ago to close the infamous Guantanamo Bay prison, and with Wednesday marking the 10th anniversary of its creation, debate is raging over whether a law he signed will ensure it will stay open for decades to come, jailing even United States citizens. 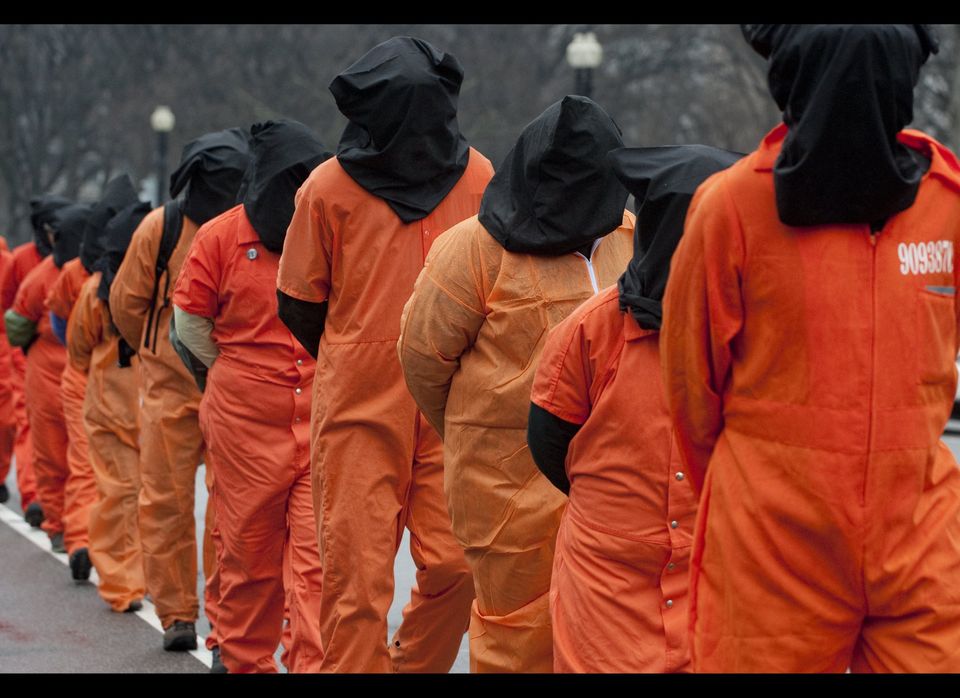 1 / 9
Guantanamo Protesters March From White House To Supreme Court
Protesters wearing orange prison jump suits and black hoods march during a protest against holding detainees at the military prison in Guantanamo Bay during a demonstration on Capitol Hill on Jan. 11, 2012, the 10th anniversary of the arrival of the first group of detainees to be held at the prison. Protesters marched down Pennsylvania Avenue from the White House, past the U.S. Capitol before finishing at the U.S. Supreme Court.
Getty