It is undeniable that Americans LOVE football players. They are like the modern version of gladiators of ancient times. We put them on a field and watch them do battle, screaming and cheering and even praying for our team to have the victory.

We don't want them to fight to the death like ancient history, yet we aren't doing enough to ensure their safety. Yes, I'm talking about concussions and CTE, otherwise known as Chronic Traumatic Encephalopathy. Science is telling us that CTE is caused by a history of repetitive brain trauma. It is a progressive disease that can start from that very first concussion.

My fellow high school classmate and friend, Scott Ross, died of complications due to CTE. He was only 45. He was a proud, gushing, loving father, a fearlessly doting uncle, and an all-around earnest, faithful and passionate guy. Scott started playing football as a kid. He more than excelled and was lucky to land at El Toro High School and play on a CIF Championship team. He was a rock star at school, had the nicest, most popular and beautiful girl on his arm, and the world was his oyster. It was no surprise that Scott was offered the moon and more to go to USC and fight on. We were all so incredibly proud to know him. He was a Southern California legend, for sure. Even with this success, he was always so compassionate and kind to everyone he met and never boasted or acted like he was better than anyone else. Imagine, if you will, a true "Everybody's All-American." 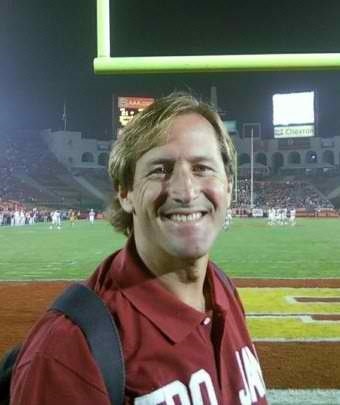 He slayed the dragon at USC, broke record after record as a monster linebacker and was a true celebrant of the Trojan spirit. As a senior in 1990, while receiving All-American honors, he was named USC's most valuable player, most inspirational player and the defensive player of the year. Once he left college, he played for the New Orleans Saints. YES! Our very own Scott Ross made it all the way to the NFL. Sadly, he was cut after one season. His mother said it so brilliantly. "Scott was cut from the Saints because of a bad hip and a degenerative back condition. In essence, he played at 110% of his body's capacity and it finally caught up to him. He had more heart and desire than lasting brawn." What we came to learn in the years to follow was that Scott's body, and his brain, had suffered irreversible damage. He received a clinical diagnosis of CTE meaning that he exhibited every symptom of the disease. It is said that not only concussions, but also sub-concussion levels can help lead to CTE, without ever presenting symptoms as they occur. 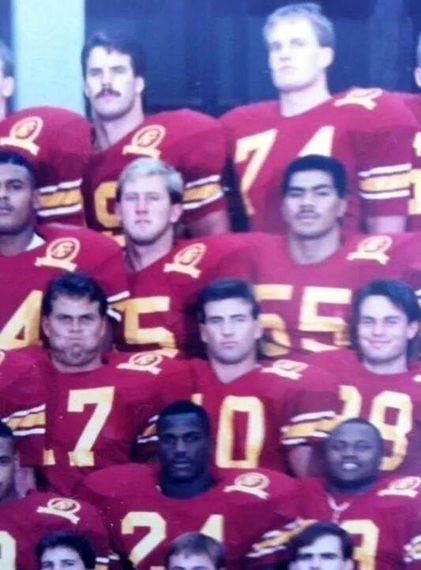 Pictured above is Scott with some of his teammates at USC. Next to him is the late Junior Seau, who also died at the young age of 45 from CTE.

Scott tried to live normally after football. His life presented a series of complications, and up until his very last day on earth he was seeking and searching for solutions because his brain and body weren't functioning the way that they should. At his memorial, many people testified to his kindness, his generosity, his bursting love for his daughter, his adoration for his family and how he was the ultimate son, friend and teammate all with the heart of gold.

We lost him. We lost our gladiator to CTE. Only a couple of months before he died, I had a great conversation with him about high school football, how he wanted to create a presentation that he could share with high school football programs to discuss avoiding concussions. We talked about helmets and I shared how I was concerned about the kind of helmet my own son had on his high school team. Scott reminded me that although good helmets were important, they can also offer a false sense of security. He said he was trained to use his head as a weapon, and his helmet created that feeling that one was invincible. It was his true belief that "Proper training and education are the keys to solving the concussion related problems in football." We talked about how ground-breaking research may be able to find out the specific reason why this is happening. He didn't want to just help himself. He wanted to help in a bigger way. I had already contacted my son's head coach to ask him if he'd be willing to hear Scott's thoughts.

In honor of a truly exceptional person who fell from CTE, I implore all of us to think of guys like Scott as we raise our kids. I'm not suggesting our kids avoid the sport. Let the kids play! Let's consider protecting them like the mama and papa bears we are, though. We all know as parents that we can certainly learn from the past. Do they need to be playing tackle football from the start? Once they are older, are they in a program with coaches that really understand the consequences of concussions? Have the coaches and parents been exposed to a formal program and a set of guidelines to avoid helmet to helmet contact and what to look for if a player is showing any signs of trauma, both on the field and at home? Are we helping to spread the word about CTE and the research that can save our kids from multiple concussions and their side effects?

Even if Scott's story doesn't move you to learn more, then consider the great Brett Favre, the great Steve Smith or the great Tony Dorsett? Research shows these are just a few of the players that are having symptoms that we suspect are precursors to ALS and CTE due to playing football. How many gladiators will fall before we get very serious about it?

Scott's family and friends adored him, and I'll never forget the USC Marching Band rocking his memorial service, the crimson and gold around his mother's neck as she held her two fingers high. I'll remember his father speaking proudly of his son, and his cousins sharing who he really was. The room was filled with fellow teammates from El Toro High, USC and the New Orleans Saints. Hundreds of his hometown friends were there to celebrate his legacy. That is what happens when someone so dear touches so many lives in a positive way. 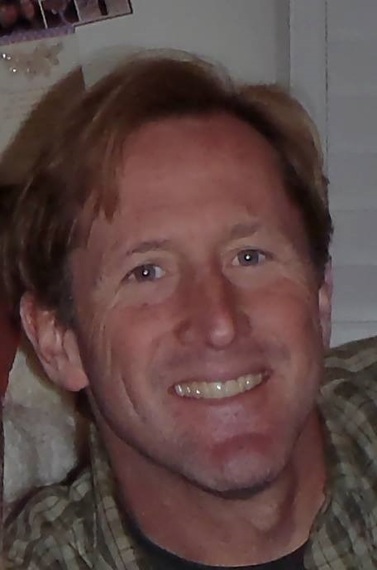 I've heard people say we shouldn't let our kids play football at all. I don't think this is the answer. I know my incredibly smart and talented friend Scott Ross didn't think it was the answer, either. We need to work together to find a solution. Awareness is a good first step.

For more information on CTE:
http://www.sportslegacy.org/research/cte/

All photos used with permission from the family of Scott Ross.

Mom of four that has been parenting for 20 years and has learned a few things.