Everything I have to say here has been said elsewhere. Perhaps I am oversensitive, or egotistical, but I feel it incumbent upon me, as a visual artist who writes publicly, to voice my thoughts, even if they are not original. There are many thoughts on offer, and I feel honor-bound to identify which ones I subscribe to. This is what I believe:

I believe that our civilization is like a prosperous garden carved out of a dangerous forest.

The forest is the state of nature. Wild animals prowl it, and violence is its law. In the forest, the weak tremble and the strong plunder. Because the forest is governed by violence, it is inhospitable to the peaceable arts and industries. Therefore, no matter how strong the strong, they cannot plunder much, because there is not much to plunder. The forest is impoverished and poorly populated. And yet, it is home to a frightening population.

In the garden of our civilization, we have agreed amongst ourselves to delegate violence to a single authority, which governs by our consent and at our pleasure. Having abandoned a daily warlikeness, we devote a large part of our energies to increase in prosperity. Though some have more, all have much, compared with the meanness of the forest.

Just like the forest, our garden grows plants and animals, the things of nature. Because our garden has persisted longer than the life of any of us, and because its produce is the produce of nature, we have come to think that our garden is natural. But it is only partly natural: it represents what nature can produce, when its aimlessness, its brutality and its self-devouring, are tempered by reason, insight, wisdom and work. In this way, our garden is profoundly unnatural.

We have, to a great extent, forgotten, because we never knew, that our garden is carved out of the forest, and will one day revert to the forest if we do not constantly tend it. We pull up weeds and drive off pests and crows, and we think that we are tending the garden. But this is only the gentle part of our eternal war with nature. We are also fighting wolves.

Most of us have never seen a wolf, and will never see one. There is a reason for this. The garden is surrounded by a wall, which separates it from the forest. It is not a terribly strong wall, and must be attended by guardians. Each of these guardians has pledged his or her life to the defense of our civilization -- our garden. We have forgotten that they stand eternally on guard, their backs turned to orderly rows of plants, their eyes scanning trees. They keep the wolves off from us.

The magazine Charlie Hebdo was -- is -- a house of guardians. Its staff pledged themselves to guarding one of the bedrock requirements of our civilization: its freedom of speech. At a personal level, freedom of speech is the first right, the essential one; without it our enforced silences turn us into unwilling liars. These lies make our lives shabby, shadowy things. At a civilizational level, freedom of speech is a guarantor of peace and progress. It is a chief means by which human beings are able to resolve their differences. It has only one significant alternative, and that is force.

Freedom of speech is not forged at its center. It is forged at its boundaries. Charlie Hebdo endlessly patrolled the outer wall of civilization, checking that its defenses remained sound. It was by definition an un-pretty task. Their job was to speak the unspoken, to test that it had not become the unspeakable.

In 2005, Charlie Hebdo spotted a breach in the wall. The Danish daily Jyllands-Posten published a group of cartoons depicting Mohammed. This decision led to worldwide violence and threats of violence, against Denmark, against Jyllands-Posten and against the cartoonists. The Danish government initially explained that it could not simply dictate to Jyllands-Posten what it could and could not publish. Other European governments were not so supportive. Our own was not so supportive. The Danes eventually apologized.

Resolution of disagreement by means of speech, the instrument of reason, had been replaced by resolution through force. The wolves were inside the garden. Charlie Hebdo republished the cartoons in solidarity in early 2006.

Charlie Hebdo, however, was not the only house of guardians of the freedom of speech. Every Western newspaper owes its existence to this right, and serves this right as a key component of its job. At the moment that speech was replaced by force in late 2005, every newspaper, regardless of its own editorial opinion of the cartoons, had a duty to reprint them in solidarity. One newspaper alone can only sound the alarm. All newspapers together can drive out the wolves. On this matter, the American press was absolutely craven, to its eternal shame.

Charlie Hebdo, and a very few others, stood and did their duty, and because they were a lonely few, they became readily identifiable targets for the enemies of free speech. Following publication of similarly provocative material in 2011, the offices of Charlie Hebdo were firebombed. Last week they were the victims of more violence.

There have been many responses to this event. I haven't got much use for all those social media profile pictures that say "Je Suis Charlie." Nor do I care much for the editorial cartoons expressing how terribly tragic it all is, and how the people shall not be silenced. This is not how you honor the dead. It is only how you tamp down that dreadful nausea this atrocity has induced in every civilized stomach. The dead died for something. They died to exercise -- on their own behalf and yours -- their freedom to draw and share the outrageous. If anyone wants to honor them, sharing that work is how it's done.

In this context, I would like to acknowledge the public stands on the matter taken by two people and one newspaper. Art critic Jerry Saltz, with whom I have had any number of disagreements, understood the proper honor and acted on it right away, posting Charlie Hebdo cartoons to his Facebook wall and, when challenged on it, responding with a curt, "We draw whatever we want to."

And Salman Rushdie, on Bill Maher, calmly explained, "what we can do is not give a fucking inch."

The newspaper I would like to acknowledge is my own -- The Huffington Post. Deputy Media Editor Catherine Taibi, with the approval I assume of Arianna Huffington, ran a short article entitled "These Are The Charlie Hebdo Cartoons That Terrorists Thought Were Worth Killing Over." I have never been prouder to write for The Huffington Post. In general, I am seeing more reprints of the cartoons this time than occurred in 2006, and I am heartened. When the wall of the garden is breached, it is all hands to the repair. Not all hands have shown, but more have than last time.

For my part, I am not much of anyone. This was the picture I chose to post: the drawing, and the man. 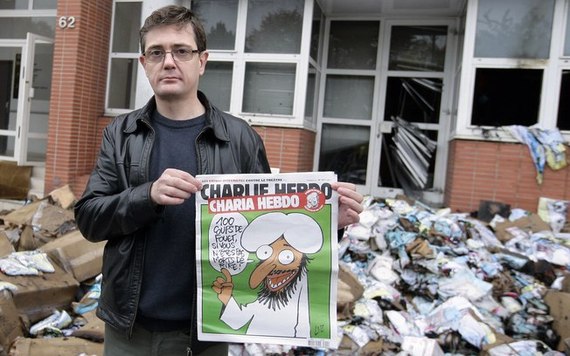 It is Charlie Hebdo editor Stéphane Charbonnier outside his firebombed office in 2011, along with the issue of Charlie Hebdo the firebombers were expressing their disagreement with. This is what Stéphane Charbonnier said the next year: "I am not afraid of reprisals, I have no children, no wife, no car, no debt. It might sound a bit pompous, but I'd prefer to die on my feet than to live on my knees." He was murdered on January 7, 2015.

I did not know Charbonnier, and if I had known him, I might not have liked him. I did not read his newspaper, although I knew in a general way what it was, and the stand it took in early 2006. The man I see here is pale and clammy, with poor posture and a lousy physique. His clothing is indifferent, his hair unkempt. He has, of course, just had his newspaper burned down by terrorists. But he strikes me as an awkward man, a nerd, a guileless enthusiast made terribly vulnerable by his enthusiasms, as a child is vulnerable. Like a child, he cannot let go of the sting of evil. It gnaws at him and enrages him when the world does not turn out as he expected it should. He determines himself to act, blankly considering the consequences but having made his decision in the first moment. His company, I imagine, is fatiguingly intense, his mannerisms sometimes abrasive, his inability to consider compromise more annoying than anything else. This is much how I imagine our own Thomas Paine, actually. In case it is unclear, the man I imagine is someone I would have liked. My imagining is no doubt largely inaccurate, but that's all I've got of him now.

He was a guardian. He and his colleagues fell in service to the garden of the West. We stand in their debt, and cannot afford to lose what they died to defend.