Karen Abigail Monahan is ten years old and lives with her mom and dad, Jennifer and Timothy Monahan, in Liberty, Missouri, a suburb of Kansas City. She is likely in the fifth grade and undoubtedly knows that she was adopted from Guatemala.

Someday soon, this little girl will sit at a computer and type her own name, or that of her parents, into a search engine and find a tale of mystery, intrigue and an international child trafficking scandal that contributed to the end of American adoptions from Guatemala.

Karen will discover that it is believed she was born Anyelí Liseth Hernández Rodríguez to Loyda Rodriguez and her husband, Dayner Hernández, a middleclass couple from Guatemala, who had two other children (Karen/Anyeli's full brother and sister) at the time she was born and abducted. She will find pictures of herself and photos of her tearful Guatemalan mother, who along with her father, immediately and repeatedly reported that their child was abducted from the front yard of their home on November 3, 2006. She will discover that the Guatemalan government determined after extensive investigation that she was kidnapped from her family and that her visa was issued illegally when she was brought to America in 2008. 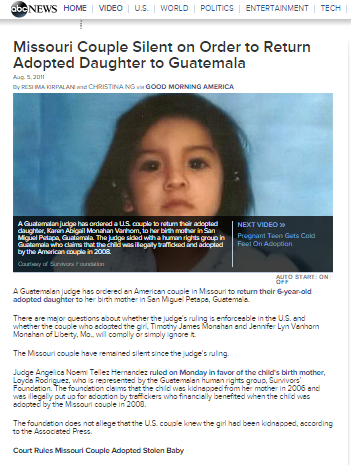 Her mother, Loyda, she may discover, took part in a hunger strike to bring attention to her case and to other kidnappings perpetrated to create adoptions from Guatemala, and neither her mother nor her father ever stopped trying to have her returned, or at the very least, to see her.

Will seeing headlines like this and reading the stories like this make her feel as one would feel seeing oneself on a milk carton? Will she have been told, or perhaps heard, rumors at school or around town? She was four when she came to America. Will she have any childhood memories that will be triggered by seeing her baby pictures? 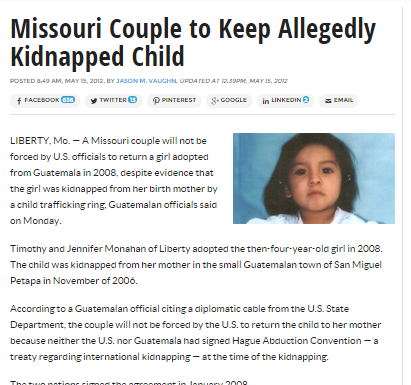 If Karen/Anyeli doesn't uncover the story as a curious teen, she likely will as a young adult when she applies for a driver's license with post-911 restrictions in place. Karen's American-issued amended birth certificate - like that of all adoptees - will indicate that she was born to her adoptive parents. The filing date on her U.S. birth certificate, however, will be four years subsequent to her birth, when she was adopted and came to America. The delay in filing date raises red flags for adoptees.

In her case, there is no telling what will happen next being that her Guatemalan birth certificate and passport were nullified. She may never be able to obtain a passport and thus would not be able to travel to her country of birth, or visit her Guatemalan family, and return.

The Guatemala government is demanding her return, and the U.S. government has responded with silence. In violation of international treaties, The State Department has failed to insist on DNA tests to prove or disprove the kidnapping allegations.

Karen/Anyeli will be able to read the details of her case in many online accounts, including most recently, "The Limits of Jurisdiction" by Erin Siegal McIntyre, who combed "over five thousand documents obtained and leaked from various sources in Guatemala, interviewed dozens of parties, and gained insight from criminal investigators and experts associated with the case in both countries."

She will learn that her American adoptive parents found her through Florida adoption agency Celebrate Children International (CCI) and were aware of problems from the very start, and that the person who claimed to be Anyeli's Guatemalan mother turned out not to exist. She will learn that:

"Loyda Rodríguez's DNA was compared to the DNA sample kept on file for Karen, drawn in July 2007. Two independent labs, one in Spain and one in the US, sent their findings back to Guatemala. Both agreed: Rodríguez and 'Karen' tested 99.98% positive for a maternal match."

The Monahans were told to let it go and try to adopt another child. But they loved her by then and feared if they didn't continue despite the red flags, that she would languish in foster care, or worse. In order to make it happen, American adoption attorneys and Guatemalan lawyer Susana Luarca Saracho, had the two-year-old declared abandoned, and the adoption proceeded despite irregularities and police reports of her kidnapping.

"The case," says McIntyre "pits American against Guatemalan interests, a family against a family. It can be seen as a study in the failure of cooperation and international diplomacy, or as an examination of influence, wealth, and power. The situation forces questions about the definitions of what is right, what is moral, and what, exactly, is criminal."

Reading the strange odyssey, Karen/Anyeli will discover that nearly a dozen Guatemalans, including government officials, have been charged with serious criminal offenses related to her adoption, including dereliction of duty, human trafficking, and falsifying documents. Two women, a nursery director and a lawyer, have been found guilty and are serving jail time for their involvement with this case.

While Karen/Anyeli's adoptive parents and the U.S. government ignore the controversy and illegalities surrounding her adoption, it remains to be seen how learning about it, which seems inevitable given the news coverage, will affect the child at the center of it. Will she want to meet the family she was taken from, who has loved her, fought for her, and longs to see her? Will she understand why her adoptive parents did not cooperate with the Guatemalan government or the parents she was stolen from?

One wonders, too, how Timothy and Jennifer Monahan continue to justify hiding behind their attorneys and PR firms, ignoring the pleas of Loyda Rodriguez to see her daughter. One wonders if they live in fear of allowing visitation between the child and her kin, terrified, ironically, that Loyda would kidnap her own child back.

Another American mother, also named Jennifer, faced with a Guatemalan adoption that raised suspicions, chose to blow the whistle on the baby brokers. In doing so, Jennifer Hemsley forfeited her own desire to mother the child she had bonded with, but she did not abandon the child. Hemsley continues to pay for the child's foster care and private schooling in Guatemala. Hemsley shared with me that "it's profoundly sad to not be with her every day", and to just visit and see her grow up in pictures; but, she says, "It's not about me. It's always been about her." Hemsley wrote:

"The children who are torn from the only mother and father they know, who are deprived of their truthful origins and original family...may suffer tragic consequences far into the future...."

She believes most who adopt enter into the process with the best intentions and with trust in the agencies, facilitators, and attorneys, as well as "the US government and other entities, to monitor the safeguards established to protect the system from corruption. But the system failed...

"In Guatemala, despite being known for issues of impunity and a weak judicial system, there have been arrests, sentences and imprisonments. But in the US, there has been no justice and no accountability. Those that profited millions through illicit adoptions and outright kidnapping enjoy the fruits of their crimes with no laws or regulations in place to hold them accountable."