Our newly-released gubernatorial forecasts shows plenty of close races. A new poll shows the Republican leading in Iowa. And is it possible that pollsters have called nearly everyone in New Hampshire? This is HuffPollster for Wednesday, September 17, 2014.

HUFFPOST'S GUBERNATORIAL FORECASTS GO LIVE - On Tuesday, HuffPost launched a new page with polls-only forecasts of the outcome of 36 races for governor in 2014. We have also applied the same win probabilities and house effect correction model to the gubernatorial estimates that we launched a few weeks ago for U.S. Senate contests.

As with the battle for control of the Senate, the 2014 elections feature a large number of close and highly competitive gubernatorial contests. In estimates based on all available public polls compiled by HuffPost Pollster, the Democratic and Republican candidates are separated by less than 3 percentage points in five states: Colorado, Florida, Maine, Michigan and Wisconsin. The leading candidates enjoy slightly greater margins in six more states -- Arkansas, Connecticut, Georgia, Illinois, Kansas, and Massachusetts -- where the outcome remains far from certain. 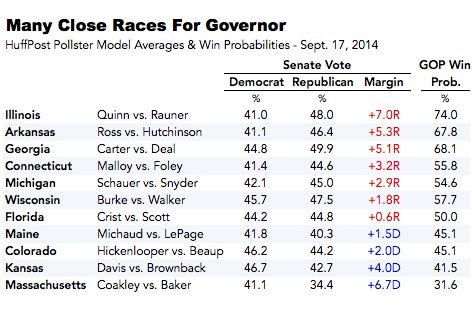 To summarize the details of how the model works: We begin by collecting every publicly released poll on the 2014 gubernatorial races. We then use a statistical model to estimate the trend in support for each candidate based on all the survey data, adjusting for sample size and pollsters’ “house effects.” Interactive charts of those support trends are available on the HuffPost Pollster home page. As explained in more detail previously, we do not treat polls equally; instead, the model considers the true poll average to be that of nonpartisan polls with a record of performing well.

The model then calculates a “win probability” for each race that takes three additional factors into account:

NEW POLL GIVES GOP THE LEAD IN IOWA - From a just-released Quinnipiac survey: "Neutralizing the traditional Democratic lead among women voters, Republican State Sen. Joni Ernst leads U.S. Rep. Bruce Braley, the Democrat, 50 - 44 percent among likely voters in the race to replace U.S. Sen. Tom Harkin in Iowa, according to a Quinnipiac University poll released today. Ernst leads among men 56 - 39 percent, while Braley leads among women by a smaller 50 - 44 percent margin, the independent Quinnipiac University poll finds. This survey of likely voters can not be compared with earlier surveys of registered voters….By a 45 - 39 percent margin, Iowa likely voters have a favorable opinion of Ernst. Braley gets a 38 percent favorability rating, while 41 percent have an unfavorable opinion of him." [Quinnipiac]

Breaks a string of better polling for Braley - The previous three surveys of the race released in September -- from CNN, Loras College and CBS/NYT/YouGov -- found Braley up by 1 to 4 points. The last poll to show either candidate up by more than 4 points was a Loras College poll conducted immediately after the Republican primary, which gave Ernst a 6-point lead. HuffPost Pollster's model, not yet including the new Quinnipac results, rates the race as a tossup. [Iowa chart]

GOP GAINING STRENGTH AHEAD OF MIDTERMS, SURVEY FINDS - Megan Thee-Brenan: "A New York Times/CBS News poll shows that President Obama’s approval ratings are similar to those of President George W. Bush in 2006 when Democrats swept both houses of Congress in the midterm elections. A deeply unpopular Republican Party is nonetheless gaining strength heading into the midterms, as the American public’s frustration with Mr. Obama has manifested itself in low ratings for his handling of foreign policy and terrorism. The generic ballot question, which measures national sentiment for the House of Representatives vote, shows a notable swing of voters toward the Republican Party and away from Democrats. Voters’ dissatisfaction with their own representatives has hit a high as nearly two-thirds say they are ready to throw their own representatives out of office." [NYT]

A QUARTER OF AMERICANS ARE WORRIED ABOUT EBOLA - CNN: "While President Barack Obama acknowledged Tuesday that the chances of an Ebola outbreak in the United States 'are extremely low,' roughly one in four Americans are worried that they or someone in their family will become a victim of the virus, according to a new survey. The CNN/ORC International poll, which was released Tuesday, indicates that 27% of Americans are concerned, compared to 73% who are not worried. More people, 41%, are worried about being victimized by terrorism….According to the new survey, more women than men fear that someone in their family will contract the disease, 32% to 21%." [CNN]

DEMOCRATS SPENDING MORE IN SENATE & HOUSE ADS - Wesleyan Media Project: "In the past two weeks, advertising in federal and gubernatorial races has not only increased in volume compared to the same period in 2010, but is more negative as well. Democratic advertising has outpaced Republicans advertising over the past two weeks in House and Senate races, while Republicans hold an edge in gubernatorial races....'Clearly, Democrats are starting to reverse the early Republican lead in the ad war,' said Travis Ridout, co-director of the Wesleyan Media Project. 'Forecasts of House races suggest that the Republicans will keep control of the chamber, but Democrats are working hard to hold on to–or tip—every competitive seat,' he added....Figure 1 depicts which party held the ad advantage in each media market over the past two weeks, with separate maps for House and Senate advertising. Blue, which indicates a Democratic ad advantage, is much more common than red, which indicates a Republican ad advantage. [Wesleyan.edu] 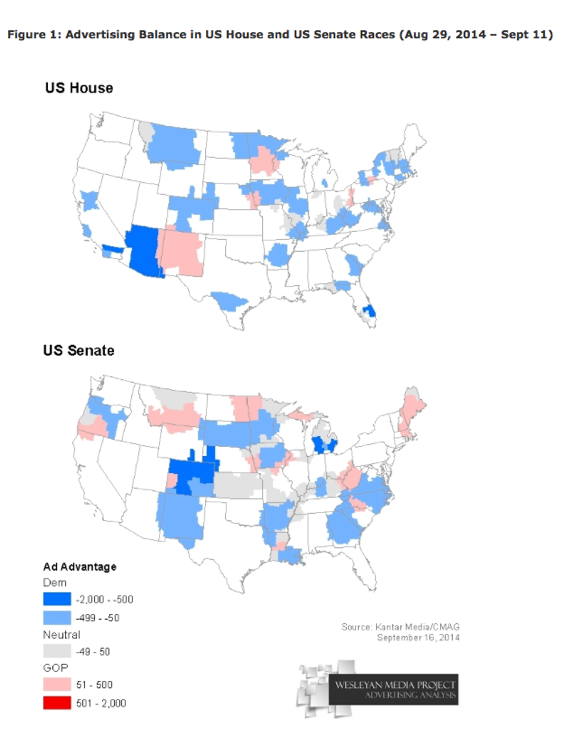 -Harry Enten: "Democratic Senate candidates and the outside groups supporting them have enjoyed advertising edges in almost all the competitive Senate contests over the past few weeks. Three of their larger advertising leads have been in Colorado, Michigan and North Carolina — the three states where we’ve seen the biggest movements toward Democratic candidates in the FiveThirtyEight forecasts. New Hampshire, one of the few competitive states to move toward the GOP over the last week, is also one of the few states where Republicans have had an advertising advantage." [538]

REVIEWING NEW HAMPSHIRE'S 'PLENTIFUL' POLLING - Steve Koczela: "This is the fifth poll on the [New Hampshire] Senate race released since the primary, which was just seven days ago….If five polls seems like a lot for one state, it’s nothing new for New Hampshire. The state’s small size and large share of closely watched races mean New Hampshire residents are polled far more than residents of any other state….From the 2012 race through to this writing, there were 117 publicly released polls in New Hampshire, with a total of 85,209 individual interviews (phone calls, online interviews, etc). This works out to one interview per 16 New Hampshire residents. Next closest is Montana, with one interview per 25 residents. The rest of the states have at most one per 44 residents. While a few other states have had a higher number of polls, no other state has seen such a concentration of polls per resident of the state." [WBUR]

Everyone's been called? - Koczela's calculations cannot include most of the internal surveys conducted by campaigns that are never publicly disclosed, though their volume is presumably just as heavy in New Hampshire as the public polls. Consider the Obama campaign alone, which completed interviews with as many as 6,000 New Hampshire voters a week during the last two months of the 2012 elections, including both traditional and analytic model polling. Factor in response rates that in most cases now fall below 10 percent, and it's probable that nearly every New Hampshire voter -- especially those with listed landline phones -- has been called by a pollster in recent years, most more than once. [HuffPollster on 2012 Obama polling]

-Trust in mass media returns to an all-time low. [Gallup]

-The majority of African-American and Hispanic news consumers don't fully trust the media to portray their communities accurately. [AP]

-Charlie Cook gives Republicans the edge in November's Senate election, but outlines what could go wrong for them. [National Journal]

-Harry Enten hits Michigan's Mitchell Research for taking a mulligan on a survey. [538]

-Nate Silver explains the details of his Senate forecast. [538]

-Carl Bialik breaks down the differences between the policy preferences of Scots and other Brits ahead of Thursday's vote on Scottish independence. [538]

-Mark Mellman (D) finds the U.S. no longer isolationist on ISIS. [The Hill]

-Ben Highton looks into why the Election Lab forecast is looking better and better for Democrats. [WashPost]

-Brent Benson plots the rise of internet usage and the decline in landline phones on one chart. [MassNumbers]