If you're looking for a fashionable ride, look no further: Gucci has upped the automobile game.

According to the New York Times, the fashion label has partnered with iconic Italian car company Fiat to create the Fiat 500 By Gucci, the latest collaboration between the two brands.

Set to debut during New York Fashion Week on September 8, the sleek little Fiat 500 sports Gucci's signature red and green stripe down its side, while the soft-top convertible has a stripe on the roof, writes the Daily Mail.

The famous interlocking G's, of course, show up on the car's wheels.

It's the fourth time the two Italian brands have partnered, writes the Times. The North American head of Fiat, Laura Soave, said that the new special edition “amplified the Italian style” of the small car, versions of which have been tooling around European streets since 1957.

Despite its luxury partnership, Fiat 500 is no Porsche -- the car is known for being practical and affordable, as current Fiat's (not the Gucci edition) retail in the US for around $15,500.

But Frida Giannini, the creative director of Gucci, has upped Fiat's style factor. In May Fiat released an ad campaign featuring top model Natasha Poly (below), whose sultry photo shoot by Mert Alas and Marcus Piggott make the Fiat 500 look like the most fashionable car around.

But if its fashion and not cars that really excited you, no worries -- unsurprisingly, there's a special accessories line debuting to go with the Fiat 500 By Gucci, including slick black duffle bags and pouches with the green and red racing stripe.

Keep your eyes peeled on September 8 for the car's official debut in New York... and in Milan: we wouldn't be surprised if we saw Giannini cruising around in her signature Fiat during Milan Fashion Week.

Go to Fiat's special website, 500ByGucci.com, to see up-close snaps of the car. 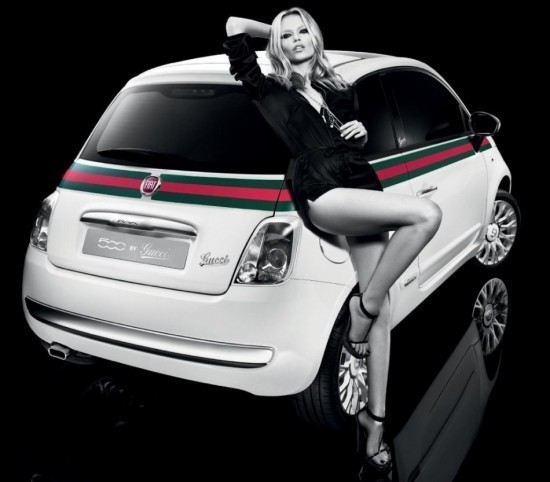