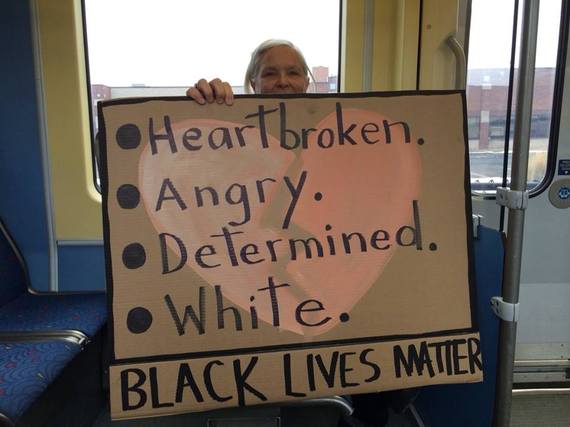 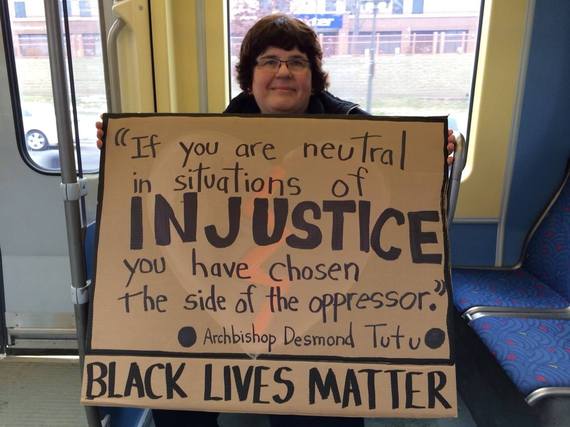 My friend Kendrick calls us "guerilla grandmothers." My longtime friend Karen posts, "We have become the old ladies in white tennis shoes -- Women's International league for Peace and Freedom." Although in Minnesota it's black boots for winter, otherwise Karen's spot on. As a White person, and as I inch up towards age 60, I have definitely shifted how I engage in public response to racial profiling, police brutality and lack of accountability in Ferguson, Staten Island, and my hometown of Minneapolis.

At my age, and also as a White in a struggle that calls for the leadership of Blacks, I find myself in a new social location, quiet and off to the side. I find myself singing Ella Baker's words, from Bernice Johnson Reagon's 'Ella's Song', "The older I get, the better I know that the secret of my going on/ Is when the reins are in the hands of the young who dare to run against the storm..."

Because, oh, these young organizers! The night Eric Garner's killer was determined to be "Eagle Scout" blameless, I needed to be out somewhere with other people, so I went to an organizing meeting. It was led by, and overwhelmingly populated by, folks much younger than me. Of varied races, genders, sexual orientations, organizational affiliations (or not). I knew five or six folks there; the 18-year-old who went with me knew many more. The meeting's facilitator -- a highly effective young Black woman -- started the meeting presuming we would be marching down a highway and shutting it down. "That's dangerous!" part of me wanted to shriek, but instead I sat back quietly. Because what do I know about what's dangerous for young Black people? Fifteen hours later, this group marched down Highway 35W to City Hall. No muss, no fuss, no violence, no injuries! (Thanks to great leadership, including trained marshalls, and also thanks to good choices by the Minneapolis Police Department, who behaved like human beings instead of stormtroopers.)

As younger, faster people hoofed it three miles down the highway, laid on the cold cement for four-and-a-half-minute die-ins, and chanted with megaphones, I stayed back at the entrance ramp with Kendrick. She held a large sign over the highway bridge where the cars on the side of the highway that was still moving could see it: Racism kills. She talked with pedestrians crossing the bridge. I stood where traffic crawled slowly from the closed down freeway's exit ramp, holding a sign that said Black Lives Matter, and smiling.

This was Minneapolis, so the majority of people, of all races, honked and gave me a thumbs up. Many people asked what was going on. And then there were the cars I could begin to recognize down the block, hostility emanating from them as visibly as if their radiator was overheated and sending up steam. The ones who were going to roll down the windows and yell at me. Snarling words which, more than 90 percent of the time, were the same. ALL LIVES MATTER! How can that beautiful sentiment sound so much like a curse? So I would smile my plump white grandmotherly smile and say, "Of course all lives matter!" (Invisible words embedded silently: Of course they do, honey! Isn't that so obvious that there's no need to talk about it? Now, back to the urgent matter at hand...)

Another planned action was to disrupt traffic around the Vikings game on Sunday, when the Vikings played the New York Jets. Kendrick and I figured we would play our same role, holding signs and talking to the congested traffic. But we arrived pretty late, and our eyes and Twitter feeds indicated not much was happening at the stadium. So we decided to hold signs and just ride the light rail back and forth as hordes of Vikings fans thronged off and on.

We did this for several hours. During this time, not a single Vikings fan smiled at us, gave us thumbs up, or spoke to us. The white ones -- 98 percent of the lightrail-riding fans -- looked angry to me, in a Minnesota kind of way. That is to say, they read my sign, looked up and glared at my face, and looked away, silently conveying that great Minnesota diss: What. Ever.

I looked back at this throng in purple and yellow, many sporting plastic Vikings helmets, my grandmotherly face conveying, I hope: "I only want the best for you and from you. And I think you can do better here."

I posted our little "power of two" protest on Facebook, because I thought it was kind of interesting and I wanted to show off the signs Kendrick made. I was unprepared for the response I got. Several White friends gushed about how inspiring the action/I was in a way that seemed completely out of scale to me. What I eventually realized is that too many White people are simply stewing in blogs and news accounts and Facebook updates and feeling helpless. If that's you, Grandma is speaking now, so listen up: This isn't a time to sit home with your feelings. This is a movement! With the reins securely in the hand of young Black leaders, in Minneapolis and in Ferguson and in countless other cities, do what you can to support whatever they're doing -- go to their events, give them bail money if you have it, tell them how inspiring they are -- and meanwhile deploy your own identities and skills, whatever they are.

You've read enough; you know what happened. Now act. Find a buddy to support you. Think creatively about how to speak out in unlikely places. Vow to bring this matter up with three White people a day. We older folks can also be good at working with institutions to change their policies and procedures... some cities have successfully changed police behavior. Policy work, educational work, political advocacy, direct action... do what fits best for you, but do something! Say something! This is a moment to seize.

In the words of veteran activist Ricardo Levins Morales: "This is the beginning of a long historical wave. So take a deep breath, bulk up on your history, and turn your anger to slow burn. This is going to take a while."