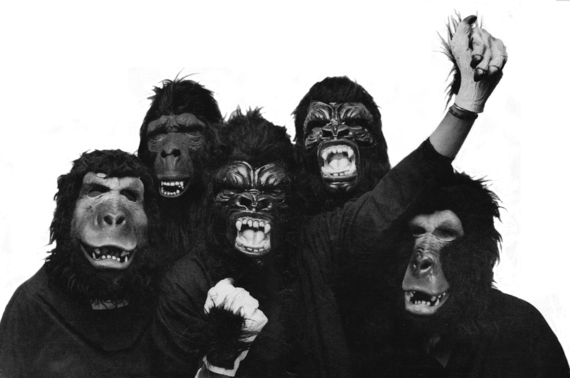 The art protest group Guerrilla Girls recently performed in front of a packed, yet intimate, crowd in Westchester, NY. A stage sat in ArtsWestchester's gallery, appropriately surrounded by its "SHE: Deconstructing Female Identity" exhibition, which explores what it means to be a woman in contemporary America.

For more than 30 years, this group of anonymous women has exercised guerrilla tactics in gorilla masks to draw attention away from them and toward the lack of diversity in the art world. We don't know their faces or even their names. They've taken the names of dead female artists as pseudonyms.

Sitting in that gallery, I was excited to be witnessing (and later taking a selfie with) such iconic figures in my industry; proud to be sitting among artwork by female artists; and pleased to be sitting in a full house of open-minded individuals.

I was then also immediately concerned as I realized that we still need to specify "female artists" and "African American artists" instead of just "artists," and that, despite the full house in the gallery that night, we still have a long way to go.

After the Minneapolis Institute of Art (MIA) requested an "intervention" from the Guerrilla Girls, the masked mavens researched MIA's collection to discover that it owned 90,000 works. Of them, only 49 were created by African Americans, and only 11 of these were on display in the museum.

Correspondingly, the highest sale of a living woman's artwork is 12% the price of the highest sale of a work by a living male. It's a sad state of affairs when, during the Q&A portion of the night, two art students were advised, and perhaps rightfully so, that "maybe [they] don't want to be in the high art world... [because] who wants to be in a world that doesn't want [them] anyway?"

In our 70-cents-on-the-dollar world, in which breastfeeding is frowned upon yet women (as a famous Guerrilla Girls poster points out) have a much greater chance of getting into a museum as a nude on the wall rather than as an artist whose work is exhibited, we need to ask whether museums are actually telling the full story of our culture. Clearly they are not. Guerrilla Girls are trying to change that, but it's up to all of us to help them.

The wit, candor and dynamism of these women filled the room with energy. The honest and hard-to-swallow facts they presented caused guests to direct that energy toward seeking justice. If, somehow, the understandable excitement that guests showed for this performance about women in the art world could be translated to the actual art world, we'd be richer for it. Better to not need the Guerrilla Girls at all than to need them to exist in order to call out society's sexism and discrimination, even if it is done in a witty and entertaining way. I love Guerrilla Girls for what they do: they play a necessary role in the progress of our society. Yet, I hope that one day they won't need to exist at all.

Full Disclosure: Mary Alice works for ArtsWestchester, which hosted this event. She is in no way affiliated with Guerrilla Girls, nor was she compensated for this article, which she wrote by her own free will.