Cazwell and Luciana are hotter than a chili pepper this summer in the first single from Cazwell's highly anticipated full-length album Hard 2 B Fresh, releasing from Peace Bisquit in August. Produced by up-and-coming Russian duo Fagault & Marina, and directed by J.B Ghuman, "Guess What?" marks a new direction for the rapper, best known for blazing up YouTube and VEVO with his hip-hop rhymes. This latest is a gnarly, horn-ridden electro anthem with contagiously catchy lyrics and a hard-pounding beat.

"Luciana has a voice like fire," proclaims Cazwell of his collaborator. "I felt such immediate chemistry with Luciana. We literally met the day before the video shoot. Both being Cancers helps too. ... She came up with the hook, and I kinda worked my lyrics around it. I knew my rhymes had to match the power of that chili-pepper voice. I wanted something that would be fun for clubs and showcase both of our skills."

In order to take his music to the next level, Cazwell set out to work with new producers and explore different themes on the record. "As an artist, you gotta pay attention to the trends but not let them control the direction of your work. Beyoncé's 'Grown Woman' track doesn't sound like any other pop hit out right now; still, she went with it. I respect how she takes chances. My most successful tracks were not influenced by anything playing on the radio."

He adds his patented Cazwell humor to the track. "I'm not really as narcissistic as I proclaim to be in the song. I mean, sure, I'm a little self-absorbed, but I don't have an inflated ego or anything. I consider myself to be pretty easy-breezy."

Cazwell earned his credibility with a steady flow of danceable hip-hop tracks, including "Ice Cream Truck," "Rice & Beans" and "I Seen Beyoncé at Burger King." His hypomanic take on pop culture has helped him to rack in over 10 million views on VEVO and YouTube and sell over 1 million downloads. In addition, Cazwell has proven his skills behind the turntables, deejaying music festivals throughout the world.

Luciana is a UK-bred, U.S.-based vocalist best known for her collaborations with Bodyrox ("Yeah Yeah") and TV's Betty White ("I'm Still Hot"). She got her start in music in 2009 when she was commissioned to help launch Nicole Scherzinger of the Pussycat Dolls. Her magnetic personality soon landed her a deal with Interscope Records/Violent Lips. Since then, she has appeared in several chart-topping collaborations with major artists including The Cataracs, Tiesto & Wolfgang Gartner, Richard Vission, Taio Cruz and Dave Aude.

"When I saw the 'Ice Cream Truck' music video, I asked, 'Who is this Cazwell, and why aren't I working with him?" says Luciana. "My team set about making it happen."

Luciana's lyrical style artfully blends with those of Cazwell, as does her personal style. Their chemistry can be seen in the song's music video, styled by Gabe de Dios. The shoot had many fun antics, including a visit from the fire department after distressed neighbors noted massive amounts of pink smoke leaving the set.

"It was love at first sight and sound," laughs Luciana, adding, "Guess what? I have a fag-hag crush on Cazwell."

Check out photos from the video shoot (photos by Terry Hastings):

PHOTO GALLERY
The Making Of &#039;Guess What?&#039; With Cazwell And Luciana
Download
Calling all HuffPost superfans!
Sign up for membership to become a founding member and help shape HuffPost's next chapter
Join HuffPost 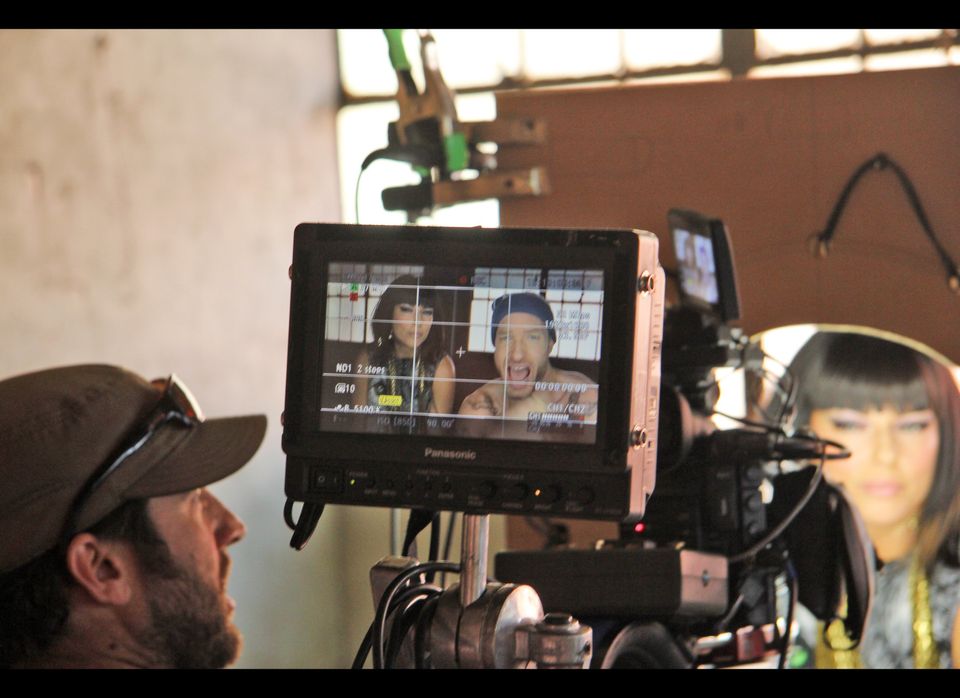