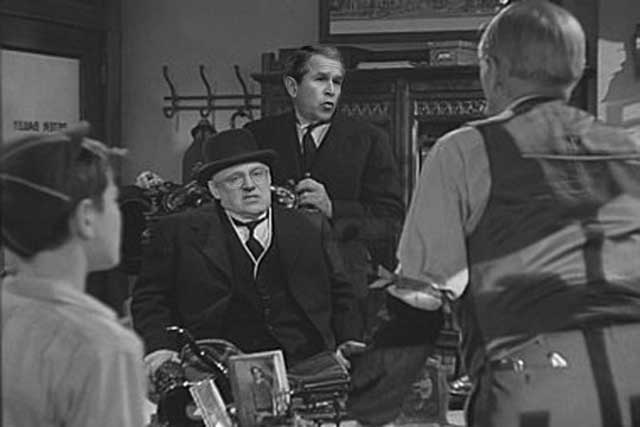 It was an eerie foreshadowing of things to come perhaps. Former vice president Dick Cheney, at President Barack Obama's inauguration, looking an awful lot like a cross between the Grim Reaper and Mr. Potter, the sinister banker from the classic film It's a Wonderful Life.

Well, he hasn't disappointed. The world's most infamous dick proved yet again that he never tires of scaring the bajesus out of Americans. The human Orange-Alert gravely warned that because of Obama's policies there's a "high probability" that the United States faces "a 9/11-type event where the terrorists are armed with something much more dangerous than an airline ticket and a box cutter - a nuclear weapon or a biological agent of some kind" targeting a major city. Boo!

Cheney warned that the proposed closing of the Guantanamo prison, along with greater restrictions and limitations on interrogation tactics, puts the nation at severe risk of terrorist attack: "The United States needs to be not so much loved as it needs to be respected. Sometimes, that requires us to take actions that generate controversy. I'm not at all sure that that's what the Obama administration believes."

It seems Darth Vader believes the Obama team's simply gonna sit arm-in-arm with our enemies and sing Kumbaya while America's targeted for a horrific attack: "When we get people who are more concerned about reading the rights to an Al Qaeda terrorist than they are with protecting the United States against people who are absolutely committed to do anything they can to kill Americans, then I worry."

Let it be known for the record that the biggest terror attack in U.S. history occurred on Cheney and Bush's watch, and that acts of terrorism around the world increased significantly while those two fear mongers were at the controls. Lastly, that seven years passed since the 9-11 attacks is not necessarily something Americans should rest assured by. Keep in mind it was eight years between the 1993 and 2001 World Trade Center attacks. Maybe it's still a bit too early for Cheney's self-aggrandizing.

Cheney defended the harsh tactics he and his former boss employed in the war on terror. Protecting America is "a tough, mean, dirty, nasty business," Cheney asserted. "These are evil people. And we're not going to win this fight by turning the other cheek."

And he ought to know. He's the toughest, meanest, dirtiest, nastiest most evil person to ever hit Washington.