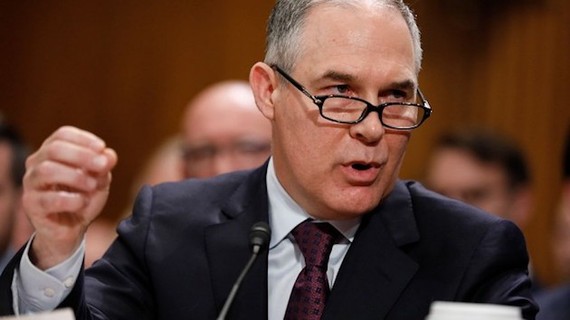 Like Pruitt, they're climate science deniers. And, like Pruitt, most of them are funded by Charles and David Koch, the billionaire brothers who own the coal, oil and gas conglomerate Koch Industries.

That funding helps explain why they all consistently misrepresent the scientific consensus on climate change. After all, money buys influence, and since 1997, Koch foundations have paid a network of think tanks and advocacy groups more than $88 million to spread climate science disinformation -- more than twice what ExxonMobil, the second-biggest denier-network funder, has spent. Likewise, Koch Industries has contributed $38.5 million to federal candidates over the last 25 years and spent another $117 million since 1998 on lobbying.

The Kochs didn't endorse Trump for president, but there's no doubt they would consider a guy like Pruitt heading the EPA a dream come true. When David Koch ran for vice president on the Libertarian Party ticket back in 1980, his party platform called for abolishing the EPA (and a number of other federal agencies, along with Medicare, Medicaid and Social Security). Although Pruitt won't be able to go that far, his six-year track record as Oklahoma's attorney general suggests he will do what he can -- with the help of Koch-funded members of Congress and the rest of the Trump administration -- to defund the agency and undermine its authority.

In advance of Pruitt's nomination hearing before the Senate Environment and Public Works Committee on January 18, a coalition of 23 nonprofit groups sent a letter to the entire Senate urging his confirmation. "Attorney General Pruitt has consistently fought for Oklahoma families and communities," the letter states, "and has been a stalwart defender against federal intrusion into state and individual rights."

In fact, Pruitt has consistently fought for the corporate polluters that have financed his political campaigns, dismantling his office's Environmental Protection Unit, halting efforts to reduce poultry manure in Oklahoma waterways, opposing a wind energy transmission line, and suing the EPA 14 times to block stronger air, water and climate safeguards that would better protect Oklahoma families and communities.

The groups that signed the letter endorsing Pruitt include such high-profile, climate-science-denier organizations as the American Energy Alliance (AEA), whose president, Thomas Pyle, is a former Koch Industries lobbyist; the Competitive Enterprise Institute (CEI), whose top climate disinformer, Myron Ebell, oversaw the Trump EPA transition team; and Heritage Action, the political arm of the Heritage Foundation. Heritage economist David Kreutzer, who maintains there is no justification for Obama administration climate policies, also served on the EPA transition team.

Those three groups and at least 15 other letter signatories have received generous support from one or more of the Koch brothers' numerous foundations, including American Encore, the Charles Koch Foundation, Charles Koch Institute, the now defunct Claude R. Lambe Charitable Foundation, and Freedom Partners Chamber of Commerce, a de facto Koch bank that distributes contributions from wealthy conservatives to free-market, anti-government groups. A number of the organizations on the letter are also funded by Donors Trust, a secretive, pass-through money laundering operation that received more than $13 million from the Kochs' Knowledge and Progress Fund between 2005 and 2014.

Eight of the signatories, including AEA, CEI and Grover Norquist's Americans for Tax Reform, collectively received $30.2 million between 2010 and 2014 from American Encore, a "social welfare" nonprofit organization the Kochs established in 2009 as the Center to Protect Patient Rights (CPPR). The organization has been one of the Koch network's primary conduits for funneling dark money -- private donations not subject to public disclosure -- to conservative campaign funding groups.

American Encore is no fan of environmental protections. A December 2016 blog post on its website calls for slashing "excessive and burdensome regulations" on hydraulic fracturing, opening up the Atlantic and Pacific coasts to oil drilling, and canceling the Obama administration's Clean Power Plan to curb electric utility carbon emissions.

A significant chunk of the American Encore-CPPR budget came from Freedom Partners, which gave the organization a whopping $115 million between 2012 and 2013. From 2012 through 2015, Freedom Partners also donated nearly $38 million to five of the groups on the Pruitt support letter: AEA, American Commitment, Club for Growth, Heritage Action and the 60 Plus Association, which spent the bulk of its $16.5 million in Freedom Partner grants on political advertising.

Like American Encore, Freedom Partners' goal is to roll back consumer, public health, environmental and workplace safeguards. It recently posted A Roadmap to Repeal, a list of Obama administration initiatives that can be repealed in the new administration's first 100 days and others that would require a longer term strategy.

In the short term, Freedom Partners calls on the Trump administration to rescind the moratorium on new federal land coal leases, abandon the Paris climate agreement, and block any proposed EPA programs related to the Clean Power Plan. It also recommends that Congress repeal a number of regulations finalized during the last 60 legislative days of 2016, including rules that protect streams from coal mining, cut heavy-duty truck carbon emissions, and reduce methane leaks from oil and gas operations on public lands. Over the long term, Freedom Partners wants the administration and Congress to kill the Clean Power Plan and the "Waters of the United States" rule, which extends federal protection to headwaters and wetlands that feed drinking water supplies.

How much impact could Freedom Partners and the rest of the Koch network have? Quite a bit, actually. They are planning to spend $300 million to $400 million over the next two years to influence politics and public policy, and Marc Short -- Freedom Partners' president up until February 2016 -- was just named the White House director of legislative affairs. Formerly Vice President Mike Pence's chief of staff when Pence was in the House of Representatives, Short likely will find a receptive audience on the Hill -- at least from one side of the aisle.

The welcome Pruitt got at his Senate Environment and Public Works (EPW) Committee hearing two weeks ago may be an indication of things to come. Republican committee members fell all over themselves to praise Pruitt and attack the EPA for, as Chairman John Barrasso put it, creating "broad and legally questionable new regulations [that] have done great damage...." Democratic committee members, conversely, pressed Pruitt on his financial ties to fossil fuel interests, his efforts to weaken environmental safeguards, and his scientifically indefensible claim that the role human activity plays in causing climate change is "subject to continuing debate."

Why were Republican EPW Committee members so hospitable to Pruitt?

Like Pruitt, most of them are on the Koch gravy train and their campaign coffers are flush with fossil fuel industry cash. Nine of the 11 Republicans on the committee together received $368,000 in campaign contributions from Koch Industries over the last five years. Even more telling, the company was among the top 10 donors for seven of those nine beneficiaries and the top donor for two -- Jim Inhofe of Oklahoma and Jeff Sessions of Alabama, who is in line to become the Trump administration's attorney general.

By contrast, none of the 10 Democrats on the committee received Koch money, let alone any coal or oil and gas industry support. The only energy-related businesses that contributed to their campaigns in the last five years were three diversified electric utilities that are heavily invested in nuclear power: Dominion Resources, Entergy and Exelon.

Donald Trump campaigned as a populist who promised to stand up to Washington lobbyists and "drain the swamp." The back story on Scott Pruitt -- and the vast sums spent by the Kochs and other fossil fuel interests to promote their agenda -- tell a very different story.

Still, one may fairly question what any of this actually proves. Does money really dictate the positions that a nonprofit think tank or U.S. senator takes, be it on climate change or any other policy issue?

As it turns out, none other than David Koch addressed this very question in an interview with Brian Doherty, author of the 2007 book, Radicals for Capitalism: The Freewheeling History of the Modern American Libertarian Movement. Koch was talking specifically about funding think tanks and advocacy groups, but what he said could easily be applied to elected officials as well.

"If we're going to give a lot of money, we'll make darn sure they spend it in a way that goes along with our interest," Koch told Doherty. "And if they make a wrong turn and start doing things we don't agree with, we withdraw funding. We do exert that kind of control."