This is the first of what I hope will be one of many conversations with ECC member photographers. Ed Kashi of the prestigious VII Photo Agency has been one of the most prolific contributors to the ECC Instagram feed, sharing incisive photographs on a wide range of climate change issues from Nigeria to Brazil, Dubai to California. He's a regular contributor to National Geographic Magazine and is constantly exploring new ways to communicate using photography.

It's been called the 500 year drought, Kashi writes. For many in California who have lived through previous droughts, now in it's fourth year, the impact is being felt from domestic use of water to the mighty agricultural industry of the state. "Last year I went to the Central Valley to produce a short film about the drought", he says, "and the devastation was evident in a wide range of areas, from domestic water run dry to hundreds of thousands of acres of arable land plowed under due to no irrigation water. It was a window into the larger forces and issues impacting the state's most precious and vulnerable resource".

He described how, even in wetter times, water usage in California is always a sensitive political issue. "While there are very real, age old issues about how California manages its precious water resources even in a good year, the current drought draws into sharp relief the conflict between the north and the south, between the every day use of water that people take for granted against the industrial and agricultural needs of the state." 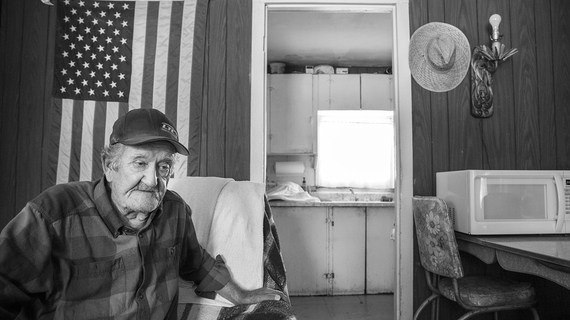 (Doyle McGill in Farmersville, Ca. on June 29, 2014. Ed Kashi/VII for EverydayClimateChange on Instagram)

Ed shared with ECC excerpts of an interview he made with Doyle McGill, 84 years old, from Farmersville in California's San Joaquin, or "Central Valley". The town's municipal water was shut off a year ago. Now he has to rely on neighbors and friends to bring him water in a tanker to fill his sinks with water "for basic necessities like his toilet".

"I've lived here since around 1940", McGill told Kashi. "This is the driest I've ever seen it since I came here from Arkansas. I've been watching the history of California and this is the worst drought ever. It's everywhere. North. South. Wherever you look. The same thing. So we'll just have to wait and see what they come up with, but it don't look good right now anyway you look at it, not for the farmers, agriculture and cattlemen who are pushing the same thing, it's like we here are trying to get by the best you can with what you got. With no water." 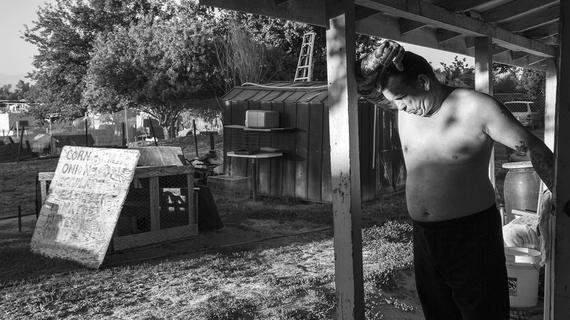 Thinking back, McGill continued, "Hell I don't know it's just living better than most places I guess. In this area there's a lot of agriculture and that's what most people come here for, to work on the farm you know pick cotton and all that way back in the 30's, 40's, 50's. A lot of them still come from out here but I don't know anymore it's pretty rough. Especially on the people right now in this area working on the farms, you know, there's no-no-no farming due to the water shortage so they go to these food places and they got no way to make a living. I mean thousands of them were working last year this time they're not there anymore because there's no water, no water to do it."

Ed Kashi interjected..."I lived in California for 25 years and always viewed the Central Valley as a place you would take long, boring drives through to get from San Francisco to Los Angeles, or to work there on a story about migrant labor, agriculture and related stories. This assignment gave me an intimate glimpse into the richness and history of this incredible place where much of America and the world depends on for a myriad of foods and fibers. This work opened my eyes to the importance of the Central Valley and the stakes of this drought on both the people and economy of California."

"That's the backbone of the world. The farmers. Without farmers, there's nothing", McGill carried on with Kashi. "And a lot of them here in California are hurting real bad. But, like I said, we just, we just got to tough it out and wait. A lot of 'em are losing thousands and thousands of trees over there. I noticed in the paper, one guy that's he's already quit trying to water 'em and he's pushing 'em up already. The almonds over there... There's just no water... Pushing dead trees up and getting rid of 'em. That's bad when it gets that way. But, cattlemen...they're hurting, big time... all I know, is just sit and wait and see what we can do... That's all we can do."

"Like I said", McGill concluded, "this is the driest I've ever seen it since I've been in California. But I guess we have to wait and see what happens. All we can do. Really." 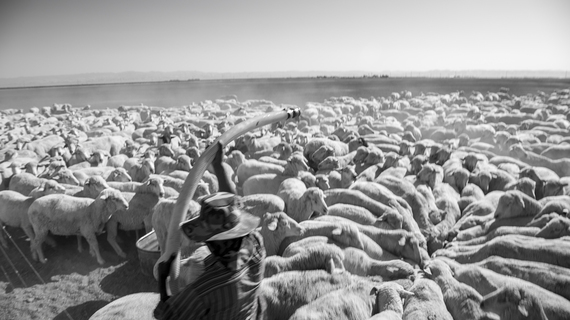 (Sheep herders gather their flock to graze and water them in the intense summer heat in Mendota, Ca. on July 3, 2014. Ed Kashi VII for EverydayClimateChange on Instagram.)

"I found those words sobering last July", Kashi reflects, "but with another year confirmed and the hottest months yet to come, Doyle's words are more relevant and powerful than ever. It will be incumbent upon the residents, farmers and industries of California to conserve and hopefully innovate out of this difficult time. After all, the painful impact on food prices and other commodities will be felt by many Americans and others around the world who rely on California, which is the breadbasket of the United States."

Japan, too. 60% of Japan's caloric intake comes from imported food. Most of its food imports come from the US, and the lion's share of US agricultural exports to Japan come from California. So, the California drought is sending ripples out across the Pacific and further. Kashi's work gives us both the personal fall-out due to a drought, exacerbated by climate change, and how it should matter to the rest of the planet.

(Aerials of the Westlands Water district, the largest in the USA, showing the extent of fallowed land due to the drought in California, on July 5, 2014. Ed Kashi/VII for EverydayClimateChange on Instagram)