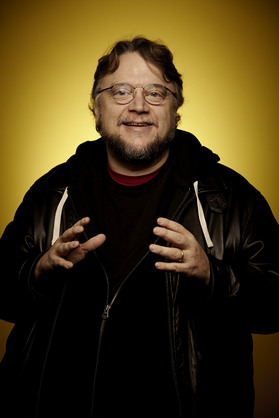 After over 30 years in the business, del Toro has solidified himself a place in Hollywood history. His films such as Pan's Labyrith and the blockbuster like Pacific Rim has been embraced by the motion picture elite as well as the public.

From Tom Cruise to director Peter Jackson, Hollywood's best and brightest have clamored to work with him.

I had the opportunity to speak with del Toro about the secrets of his success, his writing process, Mountains of Madness and a glimpse into his brilliant book, Cabinet of Curiosities.

When you were growing up and you were becoming a filmmaker, did you ever feel like you were weird or something was wrong with you in some way?

In many, many ways I felt like that. I was an outcast completely and I was so weird, and actually the world had to get weirder, so that I could I fit in. For decades, we were defending pop culture to be a source of magnificent images or magnificent ideas, and then little by little I saw it change. In 1997, we were a huge minority at Comic-Con.

You're well-regarded as a filmmaking genius. Why give away your secrets in your book, "Cabinet of Curiosities"?

Thank you, Jeff. Well, it's only a fraction of my secrets...They say 50% of what you do you can't explain; you cannot even articulate. The other day, I wrote a little piece about Alfonso Cuaron and Gravity. Alfonso is one of my best friends for over 20 years. We've seen each other's process, each other's movies. I followed Gravity step-by-step. Technically, I saw the first cut, the second cut, and the final cut. I still can't tell you how he did it...I wouldn't have been able to make it. And I've been making movies for over 30 years as a fan and 20 years professionally.

So, you can share the process so that fans and lovers of film may feel less lonely. Because one of the curses of our craft is that it's a very lonely craft. When I read interviews with my heroes, you know Hitchcock, Cronenberg, Fritz Lang, sometimes they say something that makes perfect sense.

When you're writing, what do your first drafts look like? Do they look as bad as everyone else's?

My daughter put it so beautifully the other day. She said, "You have to write the crap to get to the good stuff." And I said, "Oh my god, she's a genius." I could not have put it better. She was so succinct and so clear.

So what percentage of your rough draft actually makes it into the final cut?

The more you are a craftsman, the more you hone your craft, the more that makes it. 90% of what I shoot is precise. But in the beginning you fall a lot. It's a matter of craft and expressing it. I think it was Chomsky that said, "the limit of your language is the limit of your universe." Vocabulary, really treating words like they are musical notes and they are, at the same time, [is like] treating them like pieces of art. Mark Twain that said, "the difference between the perfect word and the almost-perfect word is the difference between lightning and the lightning bug."

Where do you get your inspiration from?

I generate much, if not more, inspiration from books and paintings and illustrations than I do from movies. I think it's extremely important for you to generate your inspiration from things other than pop culture, because pop culture is the great dessert. You need some entrees, you need some appetizers; you cannot just live off dessert. I find that whatever school of painting speaks to you can be a very nutritious supplement for visual discipline. Whatever writer - Henry James, Oscar Wilde, Victor Hugo, Mark Twain - whoever speaks to you is also great nourishment rather than just keeping up with pop culture.

Let's talk about Bleak House for a second here because...wow. In your book, Cabinet of Curiosities you have a creepy picture of your life-size statue of H.P. Lovecraft.

Lovecraft is one of the guys I love the most, and I adore having him in the house. It's like that's my family, in a strange way, my family that has been with me since childhood. These are the people that I sit with. Right now, the same guy that did Lovecraft is doing an Edgar Allen Poe, who will be sitting next to him. Soon, Edgar Allen Poe is going to be sitting in a leather chair next to Lovecraft.

What's the status of Mountains of Madness?

It's unfortunately not getting financed yet. It will take a while. We'll find a way to get it made. The two movies that most people ask me about are Hellboy III and Mountains of Madness. Everybody wants those two to happen, and unfortunately they are the two where the constant news is there's no news or there's only bad news. I think the sadness is we live in a world that has artists working in an industry that is incredibly conservative. Hollywood is incredibly conservative, and more now than ever. They are afraid to try new ideas, they're afraid to try new stuff, and frankly it's sad. But I hope one day we get it made.

Even with a movie that you made like Pacific Rim, with such a huge budget, you still have problems getting the budget that you want?

You do because with Mountains of Madness I've been holding for an R-rating. Now, I know the way I'll do it. I want to do an unrated cut and a PG-13 cut and release them at the same time, you know? That way the people that want to see the sort of harder version of the movie can go and see it consecutively with the softer version. Or maybe separated by two weeks.

Full disclosure: I received a complimentary copy of Cabinets of Curiosities in exchange for an honest review.