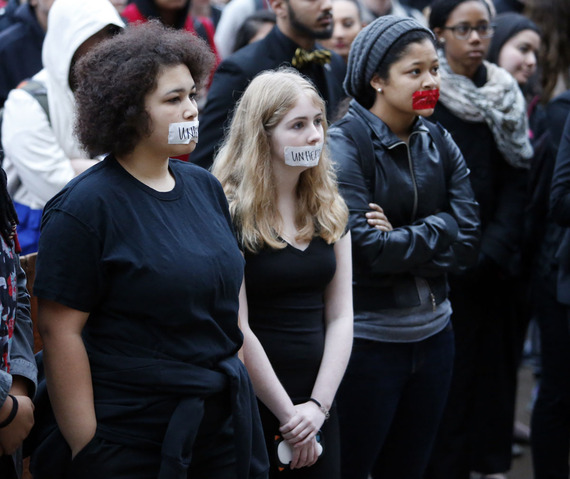 As many witnessed the infamous SAE chant video, these occurrences become commonplace, where racist remarks emerge and go viral, quickly flooding news feeds and shaking up the Internet. Whether seen on live television, or through camera phone footage, the underbelly of America's race issue keeps emerging to the surface in dramatic fashion. In a time where technology, digital media and other influential aspects of society show evident signs of progress, longstanding questions remain regarding the state of race relations in America.

With these unsettling, yet unsurprising scenarios unfolding in a timespan that recently celebrated the 50th anniversary of Martin Luther King, Jr.'s landmark march in Selma, Alabama -- the country has reached yet another conversational crossroads. For the past several months, compelling think pieces have stirred debate over racially-charged instances igniting national outrage, while countless news outlets have hosted expert panels and town hall specials to unite diverse viewpoints in hopes of bringing greater clarity to troubled times.

While a fire to force change fuels passionate protests, there are still a few critical truths that tend to be overlooked, but require great attention. Though these necessary and assertive attempts provoke dialogue, refute racism and combat injustices, there's a reason the dynamics of privilege still escape these periods unscathed. One of the most fundamental is how we, as a country, understand racism.

The Realities Of Racism

Racism is real, but the concept of racial hierarchy is a myth. Unfortunately, the notion of racial superiority is so deeply woven into the fabric of society, that it's nearly impossible for even the most conscious individuals to escape elements of its existence. Of greater note, there is simply no merit to the idea that white people are superior to any other race. As living, breathing human beings -- we're all, in fact, created equal. Racism, by form and function, is an ideology imparted as psychological law, used to set order and impose self-governance according to a fictitious ranking system.

Racism was intentionally formed to fuel classism. Before being considered people, black people were considered property. By controlling the access and allocation of assets -- money, property and resources -- people of color were forced to accept a default positioning as second-class citizens. Thus, throughout history, blacks and other minorities have been staggeringly underprivileged and considered systematic non-priorities. The mission of racism is bigger than pinning black against white. Rather, the purpose is to preserve a power structure by sustaining control.

Understanding the framework of racism transitions into the second truth: White people don't want to take responsibility for their honest place in history. It's not a secret that America was built on the backs of enslaved and exploited minorities. The brutal realities of our history haunt this nation to such a degree, that reliving them through music, motion pictures and intense dialogue is often too piercing for white people to digest.

However, to properly address the issue of racism and appropriately dispel the fraudulence of its foundation, white people would have to accept that everything America has been built upon, structurally and systematically, is birthed from a vicious lie. More so, it would need to be acknowledged that this lie is intentionally perpetuated through core competencies like language and education, as well as America's economic makeup and faulty legal system. As a consequence of accepting this truth, the concept of reparations, or other methods of repaying minorities for years of malice mistreatment would need to be seriously considered.

It is also important to provide clarity around what people are really fighting for. The overarching desire is not to live in a "post-racial" America, but to exist in a "post-racist" America. The goal is not for all races to be considered the same, but for each race to have a private identity and culture that is separate, but respected equally. Martin Luther King, Jr.'s dream was not grounded in the aspiration that race would be eliminated, but that every race could live peacefully in America, individually, with each having the freedom to enjoy the same liberties.

A post-racial country insists a mass assimilation to one collective culture and identity, ultimately falling into dominant ideals. A post-racist country references the destruction of racism as an active ideology, stripping its power and condemning the enforcement of such discrimination going forward. This is not to say that all races practice exclusivity and withhold from sharing their culture, but each reserves the right to privatize the unique nuances that define them.

Another significant point of discussion is how blacks are expected to respond to instances of racism. When moments of ignorance or insensitivity arise in relation to the black experience, people of color are faced with the option to defend themselves, educate the masses, or defer from responding altogether. For those aware of history and the inner-workings of discrimination, the choice to defend their truth is instinctual.

Making a decision to teach, though admirable and sometimes productive, means voluntarily taking on what could be delivering an endless course in blackness void of certainty that white people will legitimately walk away learning anything. Consequently, many black people don't want to teach because they simply lack a desire to, or feel it's not their responsibility -- and understandably so. It's exhausting to be reminded you're not valued equally. It's tough pushing to close a deficit you didn't choose to have. These things are what upset many black communities.

For the many that confidently believe classism does not play into racism, the framework of class may need to be put into a clearer context. If you neutralized race, making all equal, classism would then determine value and ranking in society according to worth (money), assets and social status.

Therefore, the measuring stick of power would then be determined by the accumulative differences in wealth among communities. Which, due to the established racial dynamics that placed people of color at a disadvantage, would still position whites atop the class system due to amassed wealth and control; resuming top priority for resources, opportunity, service and the like. Today, that system is also what drives racism.

For many, white privilege is merely a myth. Hearing privilege discussed amongst distinguished intellectuals and scholars is often interpreted as reactive speech to somewhat prehistoric realities of racism. Instead of enhancing the universal perspective of injustice and inequality, their attempts to elevate awareness land as misinformed lectures void of applicable lessons. Consequently, a substantial percentage of the population classifies dialogue about white privilege as imaginary and irrelevant, finding no value in addressing an ideology that seemingly has no tangible traits.

Consequently, when turmoil strikes subjugated people in traditionally segregated cities, the finger is pointed to a lack of skill or ambition, not privilege. When young people of color find their identity in a lifestyle of criminal activity out of the desire to feed their family, we turn to messages in music as a fault of misguidance and stupidity, not privilege. Yet, what the vast majority fails or refuses to realize is that privilege is not a physical battle of black against white. Privilege is a mental war of politics and positioning.

The movement for justice and racial equality is complex and multifaceted. For real change to occur, there must be an emphasis on developing a deeper cultural sensitivity and awareness, but also accepting an assortment of unpopular truths that have continued to kept this country bound for several decades. It's time that transparency takes precedence to face the realities of these truths, making even greater and more effective strides toward eradicating racism.