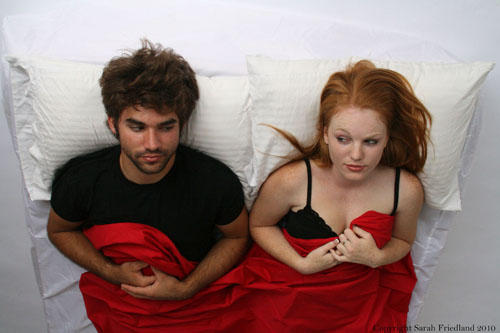 Hey God, is that you in my underpants? Does the nature of the God students believe in, and the kind of religious community they come from, make a difference in their sex lives?

University students today came of age during a period of moral panic over young people's sexual license, which was showing up in pregnancy, sexually-transmitted diseases, and a coarsening of popular culture that made Elvis' hip movements look demure by comparison. The national campaign for abstinence-until-marriage sex education, promoted by the Evangelical and Catholic communities, was at its height. If you were a conservative Christian girl whose breasts were sprouting, the most pious thing to do was to take a virginity pledge, with your loving father at your side. The True Love Waits campaign, launched by the Southern Baptists in 1993, involved the following pledge: "Believing that true love waits, I make a commitment to God, myself, my family, those I date, and my future mate to be sexually pure until the day I enter marriage."

Does sex wait for God? Are young believers of different faiths more or less likely to think that sex is morally wrong? And if they do, are they less likely to be doing it? Do they feel God's presence there in the bedroom? What is the religious geography of sinfulness and guilt?

You could easily imagine that your religion should have nothing to do with your love life. Sex is a private act. Nobody is looking when you unhook her bra or unzip his pants. Besides, all the monotheisms -- Judaism, Christianity and Islam -- consider sex outside marriage a sin, whether you are in love or not. Period.

But you'd be wrong. In 2008 and 2009 we asked close to a thousand students, mostly freshmen and sophomores, at the University of California, Santa Barbara, to tell us about their sex lives. In this anonymous web-based survey we also asked them to which religious denomination they belonged. Almost everybody who claims to belong to a religion also believes in God. A lot of students -- just shy of a third -- don't identify with any religion. But just because somebody doesn't belong does not mean they don't believe. About a quarter of those unaffiliated nonetheless believe in God. Most commonly, they believe in a higher, ordering power or cosmic force, but not God, not the big Who. True atheists are a tiny minority in the sample -- about eight percent.

With all these God-believers, it is striking that most students -- nearly 60 percent -- don't think sexual intercourse before marriage is wrong, at all. If you look at the table below, you can see that very small proportions -- even among the conservative Christians -- think it is absolutely wrong. Eighteen percent of the Evangelical students think such sex is absolutely wrong. That's less than the 25 percent of those students who took a virginity pledge.

Students don't share the sexual teachings of their churches and synagogues. This is not because God is not active in their lives. Large majorities of Christians, including Catholics, felt such a strong presence of God during prayer during the last year that they did something in their lives in response to what they perceived to be God's will. God is alive in their lives; He's just not making sexual demands.

There are big differences in sexual morality between the followers of different religious traditions. Jews are more likely than Christians to find sex morally unproblematic. Almost four-fifths don't think there's anything wrong with it. This is not surprising. Compared to Christianity, Judaism is sex-positive. God's covenantal promise to the Israelites was fertility. Alone among the Near Eastern peoples, the Israelites understood their God as a husband and themselves as his often unfaithful lover. To worship another God was to be sexually unfaithful. In the Song of Songs, written three or four centuries before Christ, there is no mention of God, and the female -- who speaks first -- sings: "My beloved thrust his hand into the opening and my innermost being yearned for him. I arose to open to my beloved and my hands dripped with myrrh, my fingers with liquid myrrh, upon the handles of the bolt." Israel is a woman wet for God, with so much desire that it makes the door handle slippery.

That Christian students tend to be more guilty about sex than Jews is not surprising. The history of Christianity is a long struggle against sex. The early Christian ideal was to be so infused with faith in Christ that one did not even experience sexual desire. A faithful Christian who was able to achieve self-mastery could free himself from this world. In this, they promoted the radical idea that women could be equal to men. The leaders of the Jesus movement urged those who could to cease all sexual intercourse in preparation for the coming of the Messiah. It was St. Augustine, writing in the fourth century -- who described himself as being a slave to an "insatiable lust" -- who put forward the position that our sexual desires are divine punishment for our original sin, an obstinate independence of will. That original sin, Augustine argued, was transmitted down through the ages through our semen. This not only made sex shameful, it made virgin birth essential.

There are sexual differences between different forms of Christianity. As you can see in the table above, it is the Protestants, not the Catholics, who are more likely to find sex outside marriage to be sinful. You might expect exactly the opposite. For Catholics, marriage is a sacrament, a visible sign of God's grace; for Protestants it is not. The Protestants broke with the Catholic church in part over sex, that their priests and popes were having it anyway. The first thing their clergy did was to go out and get married. The difference between a Catholic and a Protestant is that the latter faces God alone, without the mediation of a priest who can confess and absolve sins. The Protestant carries his religious fate in his own hands; he or she must look to his own will as a mark of his salvation. Protestantism depends on a psychic structure of self-control in a way that Catholicism does not. Protestantism runs off a guilt that cannot be absolved.

This difference, I think, shows up in young people's private lives. We asked students how their last sexual encounter had made them feel in relation to God. A third of the Protestant students felt distant from God after their last sexual act, compared to a quarter of the Catholics and less than one-seventh of the Jews. Protestants tend to be the guilty ones.
But just because Protestant are more likely to think that sex is wrong doesn't mean they are not having it.

After my last Huffington Post blog, I was attacked from the Culture and Media Institute, which seeks to defend religious conservatives from the "media elite" for "being dismissive of abstinence and traditional morality, as well as insulting to Christianity." The headline read, "Left-wing Blogger Argues Rampant Promiscuity Among College Students, Dismisses Role of God in Abstinence."

I am neither dismissive of abstinence nor contemptuous of Christianity. When I teach students, I make it clear that contrary to media reports and students' own misconceptions, there are large numbers of abstinent students. In this sample, for example, a third of these primarily lower-division students have never had sexual intercourse. Indeed, we find the proportion of virgins is roughly equal to the proportion of students who are having sex as though it were a recreational sport.

The issue is whether this sexual abstinence lines up religiously. Does the God you worship matter? The Culture and Media Institute claimed that I had failed to discriminate between different religious communities. If only I had looked properly I would have found the religiously chaste. You would expect that students from the Evangelical community, which has pushed hard on sexual abstinence, against birth-control education and abortion, would be the most chaste. Let's see.

Students at closed Evangelical colleges might be chaste, but here at this large public university, large majorities of Evangelical, Mainline Protestant and Catholic students have already had sexual intercourse relatively early in their college careers. If we examine sexual encounters involving any kind of genital contact short of penetration of the vagina or anus, that percentage jumps to 84 percent. That's a lot of Evangelical heat. Evangelical students often attend my seminars on love, sex and God. They know their Bibles; they care and are invested. I love having them as students. I once asked the student leader of the Campus Crusade for Christ whether her members were chaste. She turned her head, catching the eye of another member. They just lowered their heads and smiled.

If, within a particular religious community, the percentage who think sex it is not at all wrong is less than the percentage who have had sexual intercourse, you have a kind of "guilt gap," a rough relative likelihood that young people in that community will have had sex but think there is something shameful in what they have done. For the Protestants, unlike the Catholics and the Jews, the "guilt gap" is huge: 21 percent more mainline Protestants have had sex than think there is nothing morally wrong about it; for Evangelicals the gap is 29 percent. That is a lot of guilty sex. For Catholics and Jews, the gap is 10 percent and 2 percent, respectively. For those who don't belong to any religion, there is a guilt deficit.

The problem with guilty sex is that it is sex students don't expect to have, for which they are not prepared, executed in the heat of passion, often -- if students came out of an abstinence-only sex education -- without much knowledge. (In this respect, these religious differences are even more striking because the State of California stood by its comprehensive sex education approach and opted out of Federal abstinence funding. That means that most of these students had some school-based sexual education.) Although the numbers are small, the pregnancy rate is also much higher for Protestant girls. Catholic and Jewish girls hardly ever get pregnant. Half of those Protestant pregnancies, mainline and Evangelical alike, ended in abortion. Protestant guilt is killing the unborn.

I am not "dismissive" of abstinence; rather, I am worried about lovelessness. If young people want to wait, they should be supported in doing so, not least by letting them know they are not alone. I am not dismissive of religion. I am dismissive of religious instruction in sexual shame, of all this adult moralizing against the wind, of not engaging the existential realities of our children, of failing to face up to the most insidious injuries of sexual license, which are located not just in sexually transmitted diseases or unwanted pregnancies, but in the hardening of the heart, in the exploitation of young women, in a willingness to settle for an exchange of bodily fluids -- if they are lucky. If you look across the last decade sexual abandon is, in fact, declining among young people. This is not because of all the religious moralizing, but because the sex on offer to young people is not feeding them, not satisfying them erotically or spiritually. For some, it has even become a bore. That, to me, is the real sin.