Documentary maker Jeff Theman thinks it's downright un-American to deem a dog dangerous due to nothing more than the way it looks -- which is what happens in jurisdictions across the country that ban pit bulls and dogs that merely look like them.

These "breed specific laws," as they're called, are "an injustice to the dogs who never did anything wrong and usually resulted in death, and the people suffered hardships as well when they are forced to turn over a family member or risk further penalties," Theman says. "They are disguised as a way to enhance community safety, but fail miserably at that task too. How cruel does one have to be to think these laws are actually helpful to any community?"

In his film "Guilty 'Til Proven Innocent," Theman looks at the people and the animals who are affected by that cruelty, including himself. 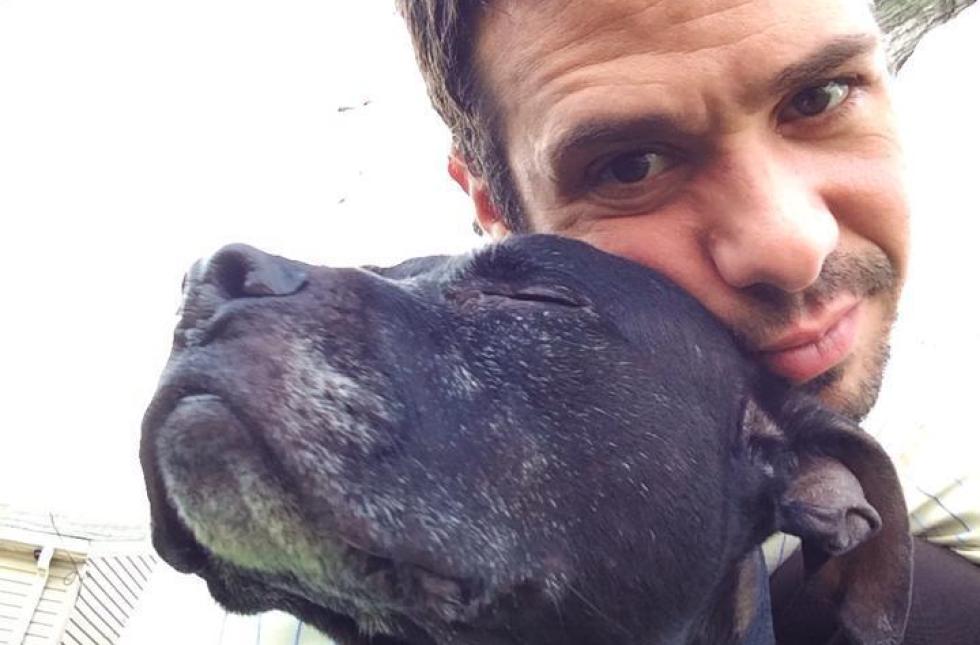 Jeff Theman with his dog Preston

Lakewood, the Ohio town where Theman used to live, enacted a pit bull ban in 2008. Faced with the choice between his pits and his home, Theman chose his three dogs. They, in turn, inspired his documentary.

The Huffington Post: What are you hoping viewers get out of "Guilty 'Til Proven Innocent"?

Jeff Theman: I mainly wanted to provide credible information to those unaware about the issue, and inspire them to be the change in their area. I just wanted to dissect the issue and seek the truth, no matter what the end result would be.

I believe we completed that task, and I am incredibly proud to say we represented the issue truthfully, which is probably the reason we have received the support from the national animal welfare organization Best Friends Animal Society. They use our film to send as a tool to legislators around the country who are proposing to implement or repeal breed discriminatory laws.

We have also been contacted by a few other [lawmakers] around the country when they were looking to repeal their laws, so we are indeed getting the response we hoped for. And the satisfaction of it feels pretty good.

The general response has exceeded all our expectations, and we hope this is just the beginning. We have had people email, message us, post on our Facebook page, all the different emotions they felt while we took them on this journey.

Your film features a whole bunch of people whose dogs were seized, or almost seized, in jurisdictions that ban pit bulls. The dogs were given genetic testing -- and were mostly found not to be pit bulls at all. What lessons can we learn from this?

Yes, I think the most blatantly obvious thing about Lakewood and this film is all the dogs shown that were deemed to be pit bulls all have come back with little to no American Staffordshire terrier, or any other breed under the umbrella term "pit bull."

So what does that tell us about the shoddy enforcement of the law? There were only a handful of dogs where the people were able to get their due process. All the others they basically scared enough, where the owner complied and either re-homed the dog outside the city or moved.

To me, the title means the dogs and their owners were automatically guilty, which is of course goes against what our country is supposed stand for -- so it's our job to inform and prove innocence. The effect of these laws is felt on both sides -- the dog and the owner. It became clear early on one of the primary motivating factors for breed specific legislation was to target social and racial classes of people legally. The dogs were used as a tool and excuse of sorts to harass individuals in mostly the urban settings.

One of the politicians in the film says that he'd support a pit bull ban even if it stopped just one child from being bitten. What did you think of that statement? And why not just ban all dogs, then?

I think that statement made by former Ohio senator Neal Zimmers was completely offensive to the men, women and children who were bitten by other breeds. It shows a lack of compassion for those individuals suffering what is a traumatic life altering experience.

Banning all dogs wouldn't even be an option simply because America loves dogs! But, I will add, there are some policies in place that make it extremely difficult to have a dog, especially housing and insurance restrictions. It's not breed specific legislation, but it is often the same outcome: tearing families apart.

You yourself are featured in the film, along with some of your family members both human and canine. The humans can speak for themselves. Tell me all about the canines!

I now live with three dogs, all who came from shelter environments. Preston is the inspiration to the film, and I adopted him on October 4, 2008, from a rescue, after I left Lakewood because of the ban. He was pulled from a shelter in the Akron, Ohio, area. Some of his past is unknown, but he was saved during a drug bust where the owners allegedly used him for fighting. I could go on and on about him, he is my soulmate, but I've written about him a lot and his story can be found on the website.

One thing I will say that will help everybody understand why I say he is my soulmate is because, he was going to be killed on July 28, 2006. My birthday is July 28. His new life started on my birthday.

I decided to foster my girl, Era, on June 30, 2011. I named her Era because it was going to be a new Era in her life, I just didn't know at the time that it was going to be with me. The plan was to foster her for a couple weeks and then she would go on a transport bus off to somewhere in New England. Preston and her were best buds from the moment they met each other, so I couldn't lose her and decided to officially adopt her after a few weeks. She's a pretty girl and she knows it, let me tell you. I nicknamed her Violent Love because she has a knack for hurting me all in the name of kisses.

Fergie was also a Cleveland city kennel dog. In August of 2012, I decided I could do more for rescue, as most of my work was in advocacy, and open my home to foster another dog.

Fergie was very ill, she was diagnosed heartworm positive, among other more treatable ailments. She was scared, and it showed. I had to seclude her from my other two dogs for two months while she was in treatment. Any stimulation could kill her, so she was only allowed out for bathroom breaks and short term couch cuddling.

When it came time to introduce her with my other dogs, it went extremely well. It helped that they all had time to adjust, and it was done slowly. I really wanted to find her a new home, but everybody was begging me to keep her, including my own mother, who was against the idea of me having a third dog in the house since I am single and it is a lot of work when you pile it on top of the other commitments I have.

Needless to say, I gave it one year, and said if she did not find a home by then, I will keep her. I am no longer allowed to foster dogs.

I understand that you've come up with a bucket list for your dogs. How is it going so far?

I came up with a bucket list for Preston mainly. One night a few weeks ago, it became painfully obvious that he is getting old. I was on the couch with the girls, and Preston attempted to jump up too. He missed and fell to the ground. When he got back up we just looked at each other and he let out a little sigh.

I helped him up and thought about some of the others who started bucket lists for their dogs. But the thing that is possibly different with mine is, he is not diagnosed with any terminal illnesses -- yet, at least -- and I didn't want to wait until that moments does happen. It was my way to keep myself in check, so I don't go days without appreciating all that he brings me.

The following day we went and spent some alone time together visiting some of the local famous landmarks within Cleveland that I always wanted to go to, but just never had time. I was able to share those moments with him, which was extremely important to me.

I had wanted to mark off the second item on my list, which was to bring him to a GTPI function, and we had our second screening in Cleveland coming up, but the building we had doesn't allow pets unless they [are] service animals, and I didn't want to take advantage of a law meant to help people out of my own selfishness. Maybe one day we will be able to cross that one off, but not now.

The next item I have is we are planning a road trip to Michigan for an animal conference I am going to. All the details haven't been worked out for that yet, but I am fairly confident we will be able to pull that one off.

I'm constantly adding to the list, and we hope to cross off more in the near future. I just want to make sure I never forget the importance of him -- and my girls, for that matter -- and it is easy to just go on with life and it not hit until something tragic happens.

Do you think things are getting better for pit bulls lately?

Oh, it is day and night better for pit bull dogs. They have definitely become the trendy dog to adopt. Celebrities are shown with them, they are featured in positive news articles nearly every day, are in print ads intended to sell household name products. The comparison isn't even close to what it once was. We still have a little ways to go, and that goes for all dogs, but we have come so far as a society to finally get it.

As far as around the county, we are noticing a progressive movement where cities are repealing these laws at a much faster pace than they are being adopted. This tells me we are turning the corner about how we view the dogs -- and their owners.

If there is one thing I wish people understood about dogs we call pit bulls it's that they are just dogs. Breed simply doesn't matter.

This interview has been slightly edited for length and clarity.

Find out more about Guilty 'Til Proven Innocent here, and get in touch at arin.greenwood@huffingtonpost.com if you've got an animal story to share!