It might seem strange that a person who just set a world record would want other people to break it, but that's what Bernice Bates is hoping.

The 91-year-old resident of St. Petersburg, Fla., just set a new Guinness World Record as the "World's Oldest Yoga Teacher," and it's not a stretch to say she wouldn't mind if she loses the title to someone older and wiser.

"Anyone that can beat the record is fine," Bates told HuffPost Weird News. "I'm sure there's a 100-year-old guy in India who can probably beat me."

Bates said she has been practicing yoga since 1960, and while her achievement is one-of-a-kind, she insists on sharing the credit with her "kids," her term for the sexagenarians who take her once-a-week classes.

The record-breaking holiday was originally created to commemorate the day in 2004 when the organization's flagship book, "Guinness World Records," became the biggest selling copyrighted publication of all time.

Now, the day is more about people coming together to push the limits of human superlatives, according to editor-in-chief Craig Glenday.

"It's a chance for everyone around the world to try a record, try to break one or set a new one," Glenday said, adding that he was particularly interested in one of the new records set on Thursday: "Largest Gathering of People Dressed As Leprechauns."

That's because the previous record was set this past St. Patrick's Day on the stage of "The Tonight Show" when 224 folks dressed up as leprechauns.

This was seen as an affront to Irish citizens -- even more than when Conan O'Brien was canned as host.

According to Derek Mooney, who organized a world record attempt in Dublin, getting the record back was an issue of national importance.

"We believe the real home for the world record for 'Largest Gathering of Leprechauns' has to be in their native soil: Ireland," Mooney said. "The Irish people demand it and there was legislation passed in the Houses of Parliament to get that world record back."

Mooney and the other Irish don't have to get green with envy any longer: They beat the record by getting 262 people to wear those leprechaun outfits.

Other records broken around the world include the one for "Most People in a Single Pair of Pants" (57), which was set in London, as was the one for Largest 3D Painting (3,807.24 feet).

Meanwhile, in Germany, records were set for the "Most Arrows Caught By Hand in Two Minutes Blindfolded" (four); "Most Bottle Caps Removed With The Head In One Minute" (24); and "Most Popping Popcorn Caught With Both Hands In One Minute" (26 kernels).

Switzerland, the capital of yodeling, is now also home to the category of "Most People Whistling" (695). The Netherlands can take pride knowing it was able to attract 1,541 people who still remember the Macarena, much less remember how to do it, and break the record for "Largest Macarena Dance," as well as 1,434 willing to stand on one leg in order to set a record in the coveted "Most People Standing On One Leg" category.

Need more? The "Longest Chocolate Bar" (49 feet) was made in Italy, and the "Largest Photo Mosaic" is in Japan and measures 16,817 feet.

Want to set a world record yourself?

It's a lot of fun, but it can be addicting, according to Donna Qualtiere, a physical education teacher at Longleaf Elementary School in New Port Richey, Fla., where 221 students set a record for "Largest Hula Hoop Workout."

"We're on a high right now, but knowing our kids they'll soon be looking for a new challenge." 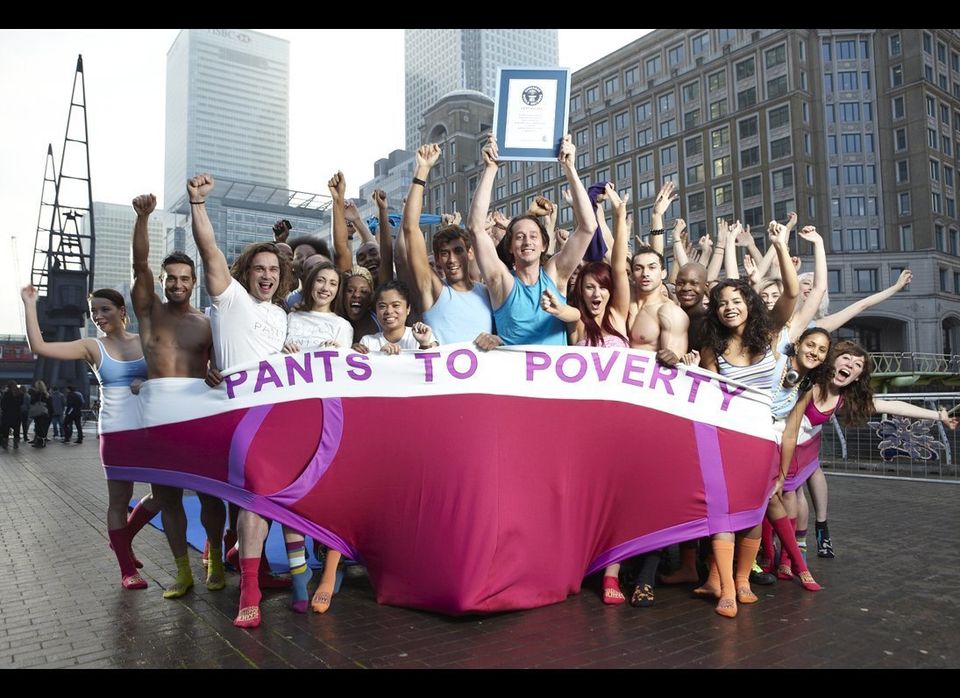