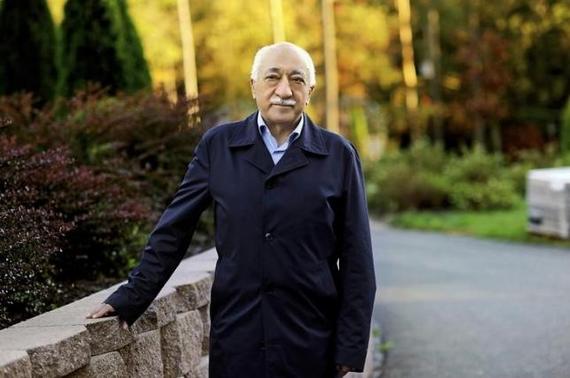 The Turkish government's war on the Gulen movement has shown no signs of ebbing. Ankara is so determined to crack down on this loose network that its top security council framed it as a terrorist group last week.

This puts the Gulen movement on par with a Kurdish rebel group that has waged a bloody insurgency against the Turkish state as well as the Islamic State. Listing the Gulen movement as a terrorist group is part of a campaign led by President Recep Tayyip Erdogan to go after its followers in other countries, where they found relative peace from increasingly aggressive government that has put more than 4,000 people in jail so far, all of whom are accused of being a Gulen movement sympathizer.

While delivering the news report to its subscribers last week, Reuters described Fethullah Gulen as a cleric who is "preaching Sunni Islam with a message of interfaith dialogue."

Gulen is a scholar currently residing in a secluded and rural area of Pennsylvania, in Saylorsbourg to be exact, just two-hour drive from New York. Many Turks believe that Gulen's compound is the headquarters of a movement that unsuccessfully engineered a coup to bring down the Erdogan's government. Of course, with the help of the Uncle Sam and Israel.

Gulen is loved and loathed by many. But is it fair to designate a movement that vociferously renounces violence a terrorist group?

Erdogan has long had a trouble in defining terrorism. He has not refrained from calling his critics as terrorists, including anti-government Gezi protesters, let alone sympathizers of violent groups such as the PKK. The broad definition of terrorism is exactly the sticking point that put Turkey's visa talks with the EU on a stalemate. It is not surprising that the Turkish government framed the Gulen movement as a terror group. Human Rights Watch senior Turkey researcher Emma Sinclair-Webb said on her Twitter feed before the designation that "Erdogan smears non-violent Gulen movement with a terror label."

Gulen's followers argue that the confrontation with the Turkish ruling party AKP dates back as far as 2010, when Gulen criticized a Gaza-bound flotilla. But the fissure between the former allies was laid bare after Erdogan publicly accused the movement for orchestrating the twin corruption investigations in December 2015 that targeted Erdogan and his inner circle.

Since then anyone praising the preacher or donating to a charity group affiliated with the movement faced criminal charges for "spreading terror propaganda" or "financing a terrorist organization." From housewives to a 91-year-old businessman, an estimated 4,100 people were jailed since summer 2014.

Last year, Erdogan ordered all Turkish ambassadors in the world to go after individuals and institutions affiliated with the Gulen movement. He hired a British law firm headed by Robert Amsterdam to pursue the Gulenists in the US and in Africa, where they established hundreds of schools, orphanages, hospitals and aid centers. Only in the US, the Turkish government hired ten lobby groups to monitor Gulen movement's activities, and if possible, to block them. In New Zealand, for instance, the Turkish ambassador sent a bulk email to dozens of senior officials, including members of the Parliament, to ask them not to attend a Ramadan fast-breaking dinner organized by the Gulen movement, sources said.

Wherever Turkish officials go, host countries ask: Do you have a court decision that says the Gulen movement is a terror group? Every time the answer is: We're working on it.

Ankara believes that the latest security council decision will be more convincing in blocking the Gulen movement's activities abroad. Yet a day after the decision, the US State Department announced that it does not view the Gulen movement as a foreign terrorist organization and that it "is up to Turkish officials" to do so. Even worse for Ankara, President Barack Obama sent a message to a culture festival organized by the Gulenists. So did UN Secretary General Ban Ki-moon and French President Francois Hollande.

Gulen is considered to be one of the world's leading moderate voices of Islam. His iconic "A Muslim cannot be a terrorist and a terrorist cannot be a Muslim" quote came to symbolize how he and his followers view the link between Islam and terrorism in post-9/11 world. In his opinion piece published by the NY Times last year, Gulen said the core tenets of a functioning democracy -- the rule of law, respect for individual freedoms -- are also the "most basic of Islamic values bestowed upon us by God."

He then chronicled his movement's achievements in the world: "[Movement's sympathizers] have committed themselves to interfaith dialogue, community service, relief efforts and making life-changing education accessible. They have established more than 1,000 modern secular schools, tutoring centers, colleges, hospitals and relief organizations in over 150 countries. They are teachers, journalists, businessmen and ordinary citizens."

In Wall Street Journal, he asked Muslims to denounce violence, demonstrate flexibility to accommodate individuals with diverse backgrounds, publicly promote human rights, provide educational opportunities to every member of their communities and said it is imperative that Muslims support equal rights for women and men.

A separate statement in which he condemned ISIS appeared in many US and European newspapers last year.

Now, what kind of a terrorist makes such statements? And what type of a terror group goes to impoverished African countries to build orphanages and hospitals?