As the six-month anniversary of the worst American maritime oil disaster approaches, people along the Gulf coast continue to struggle with its aftermath. Many feel uncertain about their future and abandoned by the media and politicians focused on their election campaigns this fall.

So in early October, local community groups and environmental organizations decided it was time to join together and come up with a plan that calls attention to the ongoing environmental, economic and public health threat posed by 200 million gallons of BP crude that still threatens America's greatest fishing ground and life sustaining delta estuary.

Altogether, 46 national organizations and Gulf coast community groups gathered at the historic Beckwith Camp and Conference Center on Alabama's Weeks Bay determined to come up with a call to arms. Nearly 100 people broke into four groups to hash out the major public issues confronting public health, marine life, coastal environment and communities impacted by this disaster. 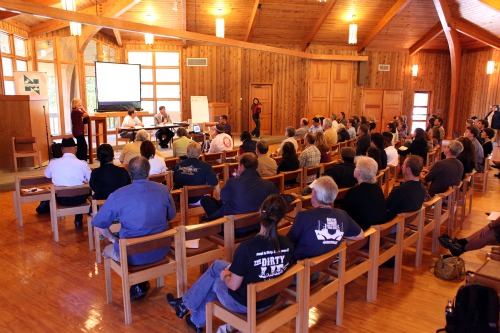 Although attendees came from diverse backgrounds and represented a wide array of interests, they shared a common goal. The Gulf was their lifeblood, and it has been threatened by oil like never before. No one knows what its ultimate impacts will be, but everyone knows its impact will be felt far into the future. So the group, including fishermen, environmentalists, community leaders and social workers, sat down to come up with a common set of principles. There is strength in numbers. Without a common voice, fighting BP and government officials who seem bent on burying this disaster will be a losing battle.

"We have to make ourselves heard with one voice: The oil is still here and so are we," said Cynthia Sarthou, executive director of the Gulf Restoration Network that organized the conference.

So after three days of intense group discussions, with nighttime breaks of campfire music and storytelling, the groups all came together with a unified vision for the future to set the agenda for the future cleanup and restoration of the Gulf. These are the guiding principles that all groups -- from Asian Americans for Change/Gulf Coast Alliance to NRDC to the Waterkeeper Alliance/Save Our Gulf -- believe must happen in order to make the Gulf whole again and sustain its future.

The Obama administration's Mabus recovery plan is a good start toward moving the country in the right direction to save the Gulf and its treasured wetlands and fisheries. But it will not take place without the involvement of local groups who can take the initiative and be directly involved in plans to restore the Gulf.

Below are the guiding Week's Bay Principles that local groups say will assure the Gulf is cleaned up, made whole and restored in a way that is sustainable for generations to come. 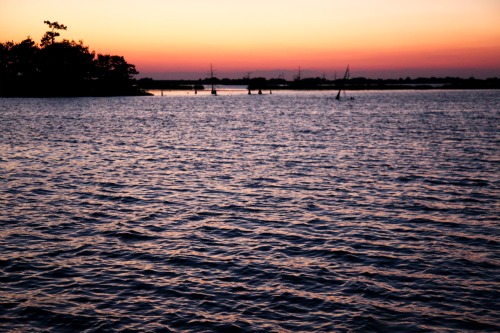 1. Growing and diverse constituencies of Gulf residents and organizations recognize that the future of their livelihoods depends on Gulf restoration. 73 percent of voters in Gulf coast states support comprehensive coastal restoration.

2. The people of the Gulf coast whose way of life and livelihood has been most affected by the BP disaster must have a seat at the decision making table.

4. Recovery must put our communities to work restoring the Gulf and building a healthy economy -- leading America into a renewable energy future.

1. Tens of thousands of response workers, community members and tourists have been exposed to oil and dispersants. There is a lack of health care providers who are trained to identify and treat chemical illnesses. We need the Center for Disease Control and National Institute of Health to provide our local health-care departments with the training and resources to provide the needed health care.

2. There are still millions of gallons of oil and dispersants in the environment -- while officials tell us that the water and air are fine, people continue to be concerned and report health symptoms. We need federal funding for independent, ongoing and long-term monitoring of our water, soil and air across all affected areas so we can be assured if and when the environment is clean.

3. The Gulf Coast provides 86 percent of the U.S. shrimp harvest, and 56 percent of the U.S. oyster harvest -- and we need better evidence that it's safe. Current monitoring is inadequate and does not test for toxic heavy metals or dispersants. It does not protect our children or our most vulnerable populations. We need the Food and Drug Administration to set monitoring standards that can guarantee the safety of the food we harvest and eat.

1. The BP disaster is only the latest, most visible evidence of environmental destruction that has been ongoing in the Gulf for decades.

2. The government must act now to restore our coastal wetlands. A healthy Gulf is a prosperous Gulf crucial to storm protection, fishing, recreation, seafood and tourism -- the cornerstones of the Gulf culture and economy.

3. 80 percent of the coastal wetlands lost in our country are lost in the Gulf coast. For example, Louisiana loses a football field of wetlands every 45 minutes, and 40 percent to 60 percent of that is attributed to oil and gas activity. BP and the oil and gas industry must pay their fair share for coastal restoration.

1. The first step to recovery of the Gulf marine ecosystem is to identify all sources of past, present and future environmental degradation, including fully understanding the long-term impacts of the BP oil disaster. Specific restoration initiatives, both short- and long-term, must be implemented to address all sources of marine injury.

2. Robust monitoring programs that fully disclose process and results, as well as access to impacted areas, are critical for ensuring effective restoration.

3. In order to restore the entire Gulf ecosystem, it is essential that the offshore environment receive its fair share of attention and funding for recovery. Specific funding sources for this work must be provided immediately.

4. Everything possible must be done to prevent offshore drilling disasters. Reforms in policy, regulations, oversight, and enforcement are urgently needed to prevent more drilling disasters and to guarantee rapid, non-toxic and non-destructive response and cleanup when accidents do occur. Policies must be implemented that transition the Gulf region to a clean, renewable energy economy.