Dr. Jane Lubchenco, NOAA Administrator, announced the re-opening of a substantial portion of the southeast section of the closed fishing area in Gulf of Mexico federal waters at a press conference on Thursday. NOAA reopened 26,388 square miles of Gulf waters to commercial and recreational fishing at 6 p.m., EDT Thursday. This opening was decided upon after "consultation with the FDA and under a re-opening protocol agreed to by NOAA, the FDA, and the Gulf states," Lubchenco said. 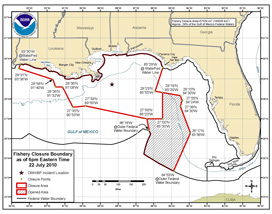 At its closest point, the area to be reopened is about 190 miles southeast of the Deepwater/BP well-head, and the area where the majority of fishing will occur is about 220 miles from the well-head, along the west Florida shelf. 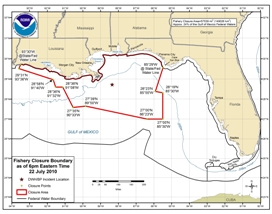 This is a notable development, coming on the heels of Senator Barbara Mikulski's (D-Maryland) July 15 hearings on BP's use of almost 2 million gallons of dispersants on the oil released from the April 20 explosion of the Macondo well-head in the Mississippi Canyon oil field. Mikulski's hearing raised many questions regarding oversight, accountability and reliability of scientific data.

In another development this week, EPA toxic waste official, Hugh Kaufman told Amy Goodman of Democracy Now, "The EPA, the government, NOAA, etc., have been sock puppets in this cover up (of the dangers of Corexit)."

Is the Obama administration and BP engaging in politics and PR with a dangerous twist?

There is no doubt that Gulf commercial fishermen have been suffering greatly from a lack of income in the aftermath of the explosion of the Macondo well-head. States have lost revenue from fishing licensing and supportive recreational industries, and BP would certainly like to reduce its liability for lost income and wages.

According to Lubchenco, NOAA's rationale for opening the closed area is that NOAA data have shown no oil in the area since mid June, and United States Coast Guard observers flying over the area in last 30 days have also not observed any oil. Additionally, trajectory models show the area is at a low risk for future exposure to oil, and fish caught in the area and tested by NOAA experts have shown no signs of contamination.

But is this enough?

Between June 23 and July 5, NOAA collected samples of fish, including grouper, snapper, tuna, and mahi mahi from the area where the heaviest fishing will take place.

"Sensory and chemical testing following the methodology and procedures in the re-opening protocol showed no detectable oil or dispersant odors or flavors, and the results of chemical analysis were well below the levels of concern," NOAA said in a press release.

In a transcript from Mikulski's Senate hearings last week Larry Robinson, the Assistant Secretary of Commerce for Oceans and Atmosphere, said, "Research on the effectiveness and effects of dispersants and dispersed oil has been underway for more than three decades, but vital gaps still exist," adding, "chemical dispersants can be an effective tool in the response strategy, but like all methods involve tradeoffs in terms of effectiveness and potential for collateral impacts."

At the sea surface, early life-stages of fish and shellfish are much more sensitive than juveniles or adults to dispersants and dispersed oil. There are no data on the toxicity of dispersed oil to deep-sea marine life at any stage, so we have to extrapolate based on existing knowledge. However, at both the surface and sub-surface, modeling and monitoring is confirming that dispersed oil concentrations decline rapidly with distance from the wellhead as it mixes with seawater and moves with the currents away from the treated areas.

Robinson added, "Thus far, we haven't found any evidence of these contaminants in any of the species that we've taken outside of the contaminated area."

But what about fish and water movement from the contaminated areas? Is a smell test enough?

The science of testing and monitoring appears to be inexact at best.

Dr. Martin Dudziak of TETRAD Technologies Group said, "Even if it is all clear, which I seriously doubt, because they are relying upon incomplete and mostly superficial observations, those fish and other sea creatures have been eating all this time and there needs to be some simple and inexpensive but REAL testing of anything caught."

An additional concern is that even if there is no oil in the reopened zones, Tropical Depression 3 has formed off the southeast tip of Florida and is likely to become Bonnie, the second named storm of the 2010 season, later today. The current storm track threatens the entire US gulf including the region of BP's Deep Horizon spill site.

Dudziak asked, "Is the area going to be still open for fishing and recreation after that storm has done to the Gulf pretty much what a Kitchen-Aid mixer does to pudding batter?"

It is intuitive that any new storm in the Gulf of Mexico will result in new patterns of subsea oil/dispersant distribution. This does not take into account any additional amounts of oil if the current containment cap is compromised.

NOAA says it "continues to work closely with the U.S. Food and Drug Administration and the states to ensure seafood safety."