An oil rig exploded off the coast of Louisiana on Friday morning.

The oil-gas production platform, located south of Grand Isle, is owned by Black Elk Energy. A spokesman for the company confirmed to KHOU.com that the rig fire sent four to a hospital and two more are currently missing.

Although some reports suggest two workers are dead, a Coast Guard spokesman addressing the oil rig fire told WWLTV that there were no confirmed deaths.

Associated Press story on the oil rig explosion continues below:

The Coast Guard was searching Friday for two workers missing after a fire erupted on an oil platform in the Gulf of Mexico, sending an ominous black plume of smoke into the air reminiscent of the 2010 Deepwater Horizon explosion that transformed the oil industry and life along the coast.

The fire, begun while workers were using a torch to cut an oil line, critically injured at least four workers who had burns over much of their bodies.

The images were eerily similar to the massive oil spill that killed 11 workers and took months to bring under control. It came a day after BP agreed to plead guilty to a raft of charges in the 2010 spill and pay a record $4.5 billion in penalties.

There were a few important differences with the Deepwater Horizon explosion that killed 11 workers and began one of the nation's biggest environmental disasters: Friday's fire was put out within hours, rather than burning for more than a day and causing the rig to collapse and sink. It's a production platform in shallow water, rather than an exploratory drilling rig looking for new oil on the seafloor almost a mile deep.

Still, the accident was a vivid reminder of the dangerous business of offshore drilling and the risk it poses to the Gulf of Mexico's ecosystem and shoreline.

A sheen of oil about a half-mile long and 200 yards wide was reported on the Gulf surface, but officials believe it came from residual oil on the platform.

"It's not going to be an uncontrolled discharge from everything we're getting right now," Coast Guard Capt. Ed Cubanski said.

Eleven people were taken by helicopter to area hospitals or for treatment on shore by emergency medical workers.

Taslin Alfonzo, spokeswoman for West Jefferson Medical Center in suburban New Orleans, said four injured workers arrived in critical condition with second- and third-degree burns over much of their bodies.

Two were sent by ambulance to the burn center at Baton Rouge General Medical Center. Two others were to be sent later.

The production platform owned by Houston-based Black Elk Energy is about 25 miles southeast of Grand Isle, on the western side of the Mississippi River delta. The Coast Guard said 24 people were aboard the platform at the time of the fire.

Cubanski said the platform appeared to be structurally sound. He said only about 28 gallons of oil were in the broken line on the platform.

After the April 2010 explosion on the Deepwater Horizon, that rig burned for about 36 hours before collapsing and sinking to the Gulf floor. The depth of the well blow-out – a mile below the Gulf surface – proved to be a major challenge in bringing the disaster under control.

The Black Elk platform is in 56 feet of water – a depth much easier for engineers to manage if a spill had happened.

A federal official in Washington said a team of environmental enforcement inspectors was flying to the scene.

David Smith, a spokesman for the Interior Department's Bureau of Safety and Environmental Enforcement, said the team was dispatched from a Gulf Coast base by helicopter soon after the Coast Guard was notified of the emergency. Smith said the team would scan for any evidence of oil spilling and investigate the cause of the explosion.

"This is yet another reminder that our work on oil drilling safety is not complete," said U.S. Rep. Ed Markey, the top Democrat on the House Natural Resources Committee.

Black Elk is an independent oil and gas company headquartered in Houston, Texas. The company's website says it holds interests in properties in Texas and Louisiana waters, including 854 wells on 155 platforms.

The company said on its website that "our thoughts and prayers are with those who are impacted." The company said it was still collecting information and would issue a statement later.

The spill from BP's Macondo well, about 50 miles southeast of the mouth of the Mississippi River on the east side of the river delta, dumped millions of gallons of crude oil into the Gulf. It fouled beaches, marshes and rich seafood grounds. 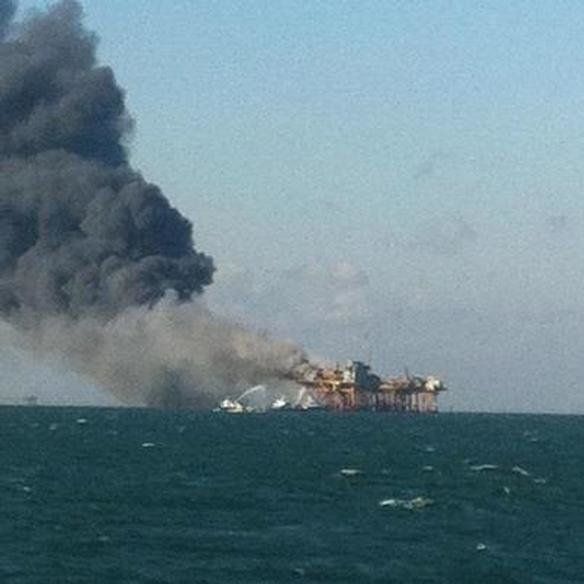