The Charleston Post and Courier has called it a “regrettable coincidence.” But to some gun-control advocates, it may in fact seem fitting.

On its front page Thursday morning, The Post and Courier ran a full-page story about Wednesday night's shooting in Charleston, South Carolina, that killed nine people. And right above the headline reading “Church attack kills 9,” some readers found a sticker advertising “Ladies' Night” at the ATP Gun Shop & Range in Summerville, South Carolina. 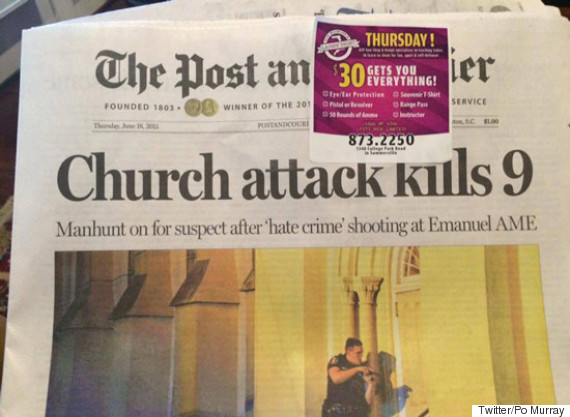 “$30 gets you everything!” the ad reads -- including a pistol or a revolver and 50 rounds of ammunition, as well as eye and ear protection.

Dozens of Twitter users have remarked on the juxtaposition, some of them citing the culture of gun ownership as a contributing factor in the shooting.

Charleston's The Post and Courier should have held its gun ad plastered on the front page this morning. #insensitive pic.twitter.com/YWOC1gZQnw

We may never know what circumstances led to this latest deadly shooting pic.twitter.com/E3FxzUK3TK

The newspaper addressed the controversy in a statement to Romenesko. “The front-page sticky note that was attached to some home delivery newspapers on the same day as this tragedy is a deeply regrettable coincidence,” the statement read. “We apologize to those who were offended.”

Last month, The Florida Times-Union also faced criticism for slapping a sticker advertising a gun show atop another front-page story about an armed attack: 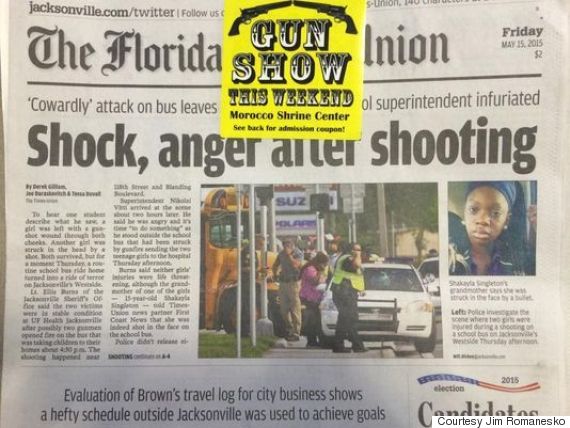