A new gun company advertisement compares President Obama to Adolf Hitler, Pol Pot and Joseph Stalin, warning about the possibility of stricter gun control laws if the president is reelected.

As CBS News reported Thursday, the USAAmmo ad places a picture of Obama next to images of some of history's most infamous dictators, calling them the "faces of gun control" and stating that "tyranny and gun control is only an election away." The ad, which was emailed out on Monday, also said that the Occupy Wall Street protests are "eerily reminiscent" of the rise of fascist dictatorships. An accompanying video details incidents of gun control throughout history, implying that millions of genocide victims could have been saved if they had been able to defend themselves with firearms.

In an interview with CBS, USAAmmo's director of operations Trace Williams stood by the advertisement and said that he did not regret the comparison between Obama and the dictators. "He's anti-gun and he's obviously a socialist cramming health care down Americans' throats," he said. "That is exactly how those people in that ad rose to power."

That would be news to gun control advocates. Despite reports that the Obama administration would unveil new gun control legislation in the wake of the January shooting in Tuscon, which left six dead and Rep. Gabrielle Giffords (D-Ariz.) critically wounded, the president has been nearly silent on the issue in recent months.

Last year, the Brady Center to Prevent Gun Violence gave Obama an "F" on gun control policy, citing his "concessions to the 'guns anywhere' mentality of the gun lobby and lack of leadership for common-sense gun laws." 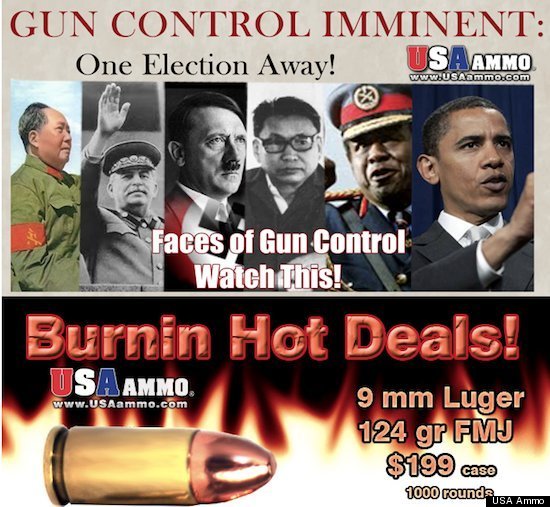